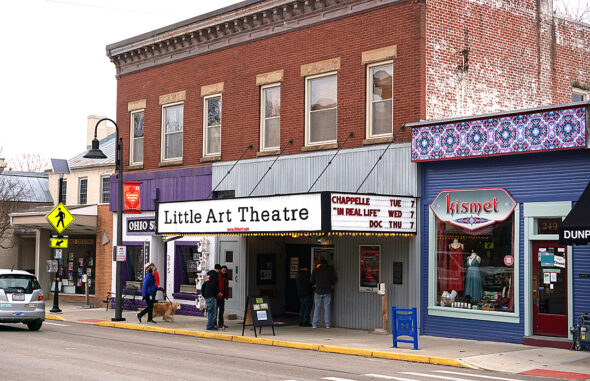 Nine months after premiering at Radio City Music Hall in New York, “Dave Chappelle Live in Real Life” is being screened at the Little Art Theatre. (Photo by Reilly Dixon)

Nine months after its premiere at Radio City Music Hall in New York City, a feature-length documentary set in Yellow Springs is getting its long anticipated local showing.

“Dave Chappelle Live in Real Life,” which takes a behind-the-scenes look at the rural outdoor comedy shows presented by the locally based comedian against the catastrophic backdrop of summer 2020, opened at the Little Art Theatre on Thursday, March 24. The recently retitled film, called “This Time This Place” at its New York debut, is scheduled to run through Monday, April 4.

Produced and directed by Yellow Springs-based filmmakers Julia Reichert and Steven Bognar and co-produced by Chappelle’s Pilot Boy Productions, the film has had a number of high-profile screenings across the country since its debut, with popular entertainers attending and performing at each showing.

For last week’s Little Art opening, Yellow Springs residents were the featured stars. In the audience Thursday night, an invitation-only free event in advance of the ticketed public screenings, were many of the local faces that make appearances throughout the two-hour film; and applause and cheers of recognition for friends and acquaintances punctuated the viewing.

Chappelle, the 2019 winner of the Mark Twain Prize for American Humor, and Reichert and Bognar, winners of the Academy Award for best documentary in 2020, spoke briefly before and after the screening, each expressing their pleasure in showing the film to the Yellow Springs community.

“So many townspeople [are featured], it’s exciting to see you all,” Reichert said at the beginning of the evening.

She shared more of her feelings after the screening.

“We are very proud of this film,” she said, adding that the project is especially important to her because it likely will be her last film as she battles late-stage cancer.

“This was a work of love and respect,” she said. “And we are just so glad to finally bring it to our hometown.”

“I cannot thank Steve and Julia enough,” he said, noting that while he knew where the couple lives, he called Netflix to get their phone number before approaching them about filming. (The online streaming service has working relationships with the comedian and the documentary makers.)

The respect between the co-producers is mutual.

“Dave was an incredible collaborator,” Reichert said at the top of the evening. “He always had very thoughtful and caring input.”

When Chappelle first proposed the idea of presenting a comedy show at the Wirrig family pavilion amid the farm fields just north of the village, the pandemic lockdown had been in effect for nearly three months, upending everyone’s lives. The police killing of George Floyd at the end of May that same spring sent shockwaves through an already traumatized nation.

Receiving permission in early June from the Ohio governor’s office to proceed, with stringent health protocols in place, Chappelle presented his first show in front of an invited audience of about 65.

Footage from that weekend became the short film “8:46,” which was shared widely through social media after Netflix posted it to YouTube. The title referred to the originally reported time — eight minutes and 46 seconds — that Minneapolis police officer Derek Chauvin held his knee on Floyd’s neck, causing his death.

Yellow Springs resident and comedian Dave Chappelle, who hosted a series of shows during summer 2020 and spring 2021 at the Wirrig family-owned pavilion just north of the Village. (‘8:46’ Screenshot, Youtube)

The film crew was made up of young filmmakers associated with Wright State University and Antioch College, Reichert said Thursday.

In an interview after the documentary’s New York premiere last summer, Reichert said that their direction to the crew emphasized specificity in place and time.

“It’s about Yellow Springs, not the country at large, not Dayton down the road,” she said.

Their intent was to capture a specific moment, not make a historical statement, Bognar said in the same interview.

The moment proved to be historical, however, as the pandemic lockdown continued and nationwide protests decried police violence against Black Americans. Locally, while most normal activities were on indefinite hold, the village’s youth stepped forward to lead what became a weekly series of marches and rallies calling for an end to police violence.

Those local actions play a significant part in the film, as do the personal stories of local business owners trying to stay afloat. Among the interviews are Karyn Stillwell-Current, of Current Cuisine; Jamie Sharp, of the YS Toy Company; Kurt Miyazaki, of Emporium Wines & Underdog Café; and Dino Pallotta, of Dino’s Cappuccinos.

All four of the shop owners were at the Thursday night screening, as were Mark Heise, president of the Chamber of Commerce; other business owners; Village Council members Kevin Stokes, who paid for a ticket, and Carmen Lee; and members of the film crew. Several employees of the Yellow Springs News also attended.

Not in attendance, but playing a prominent role in the film, was Miami Township Zoning Inspector Richard Zopf. Zopf informed the Wirrigs about a month into the shows that, because the land where their pavilion is located is zoned for agricultural use, they needed to apply for a temporary conditional use permit with the township’s Board of Zoning Appeals, or BZA, in order to continue the performances, which he said were a commercial undertaking. Failure to do so would incur fines and a possible court summons. The lead-up to the subsequent BZA hearing and the portions of the hearing’s proceedings, as experienced by Chappelle, the Wirrigs and Zopf, account for some of the film’s tension and its humor.

The film implies a cultural divide between white neighboring farmers, who cited noise, off-color language, litter and traffic among concerns with the shows, and predominantly Black entertainers. Supporters said the shows not only provided a joyful experience during difficult times, but also brought jobs and money into the community.

The BZA approved the request, and the outdoor shows continued through the summer and into the fall as Chappelle welcomed a slate of well-known entertainers to Yellow Springs. Chris Rock, Jon Stewart, David Letterman, Trevor Noah, the late Bob Saget and regulars Donnell Rawlings, Michelle Wolf and Mo Amer were among the comedians who performed over the summer. Musical guests included Common, John Mayer, Erykah Badu and Questlove.

“We did not anticipate what was going to happen,” Bognar said last year of the events that transpired.

“We love making films about people who take their art, their craft, their work very seriously,” he said in the same interview, adding that making the film gave him and Reichart the opportunity to enter the world of comedy. 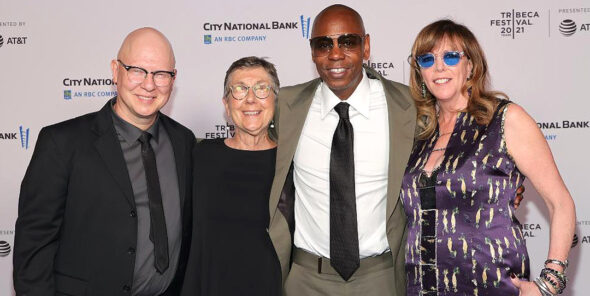 “The real gift for us was getting to be inside the culture,” he said.

In addition to performance and backstage footage, the film includes glimpses of shared dinners among the entertainers, softball games and canoe treks down the Little Miami River. Viewers learn more about the inner lives of the performers and their comedy processes and see them undergo rigorous COVID-19 testing.

More than 50 shows took place before the series came to a close for the season in late September 2020, a week earlier than planned, after Amer and a handful of others associated with the performances tested positive for COVID-19.

The film concludes with the statement that no audience member is known to have contracted the virus from attending a show. It also states that, all told, the performances brought $9 million into the local economy. (The economic study that produced that figure will be covered in a future issue of the News.)

After the film’s screening, Chappelle said that the guest performers who came into town for the summer shows were impressed by the village.

“All my friends that came here, they loved it,” he said.

They also were surprised by the degree to which local residents leave Chappelle alone when he’s going about town.

The comedian said he told the high-profile visitors that “not only do they [villagers] not bother me, a lot of them don’t even like me,” drawing a laugh from the Thursday night crowd.

For the performers and those in the audience, Yellow Springs became “a cultural mecca” at a time when the pandemic had shut down most activities, Bognar said.

“It was a place of sanity, stability and even happiness,” Reichert said.

“We made something that shows what we can do as a community and what we can do when we’re living our better angels that are inside of us,” Bognar concluded.

Screenings of “Dave Chappelle Live in Real Life” continue through Monday, April 4, at the Little Art Theatre. Check the theater’s website for showtimes. Admission is $9. All ticket holders must show proof of vaccination or a negative COVID-19 test within 48 hours of the event, with a valid ID.