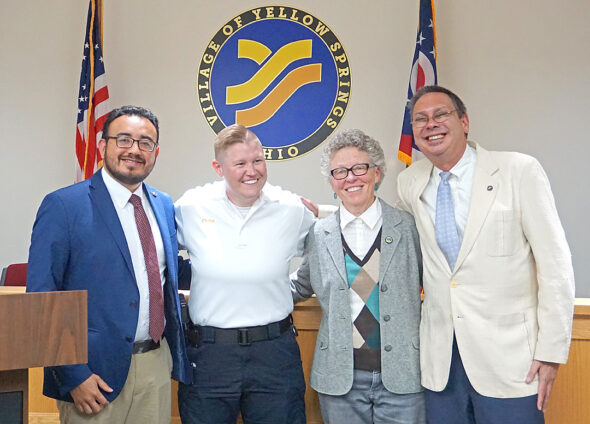 Interim YSPD Police Chief Paige Burge was sworn in as chief of police by Village Manager Josué Salmerón during the Monday, March 21 Village Council meeting. Burge, who joined the department in 2019, was chosen by Salmerón from among three finalists vying for the position. Pictured here are Salmerón, Burge, Mayor Pam Conine and Village Council President Brian Housh. (Photo by Jessica Thomas)

Nearly eight months after the resignation of Brian Carlson, Interim Chief Paige Burge has been named the chief of the Yellow Springs Police Department. She is the first woman and member of the LGBTQ+ community to take the helm of the YSPD.

“What factored into the decision is what we have been trying to build as far as the Village’s approach to policing,” Salmerón said in an interview. “Paige is the clear choice.”

Burge, who has been with the department for three years, was named interim chief in November after being promoted to sergeant in August. Prior to her tenure as a Yellow Springs police officer, Burge worked in asset protection, most recently as the district loss prevention investigator for Marmaxx, the parent company of TJ Maxx.

In an interview, Council President Brian Housh said that he was “incredibly excited” about Burge’s appointment. Housh, who was one of two Council members on the selection committee, said he was impressed with the process and how easily the group came to its decision to recommend Burge for the chief position.

“They all saw that Paige gets it,” Housh said. “Even some of the folks who were initially resistant realized that she was a good fit.”

In an emailed statement regarding her appointment, Burge wrote:
“The last four to five months have been the greatest opportunity of my professional career. When I came to work for the Village of Yellow Springs I felt incredibly lucky to work for a community and an organization that aligned so closely with my own personal beliefs. I knew almost immediately that I didn’t want to police in any other community. I am humbled that the many groups involved in the selection process have entrusted me with the great responsibility that this position entails.”

In separate interviews about the candidate selection process, Osterholm and McQueen said that the citizen group vetted each candidate thoroughly, and that it met weekly to review candidates.

“We were looking for certain qualities,” McQueen said. “When it came down to the final discussions, two candidates really shone.”

“It wasn’t a unanimous decision, but I think she’ll do a fabulous job,” he said.

Both Salmerón and Housh said that Burge had overwhelmingly positive feedback from the community surveys circulated after the Police Chief Candidates Forum, which was held on Tuesday, March 1. According to Salmerón, 61 villagers responded to the survey between March 1 and Wednesday, March 9.

The only two categories Burge scored lower in, Salmerón said, were budget experience and human relations or management experience.

Burge rose quickly through the ranks of the YSPD, beginning her tenure in early 2019. She was appointed sergeant in August of 2021 by then Chief Brian Carlson. According to Salmerón, Carlson evaluated Burge and other candidates and Burge scored the highest. Being the top-ranking officer when Carlson resigned, Burge was tapped for interim chief.

Since then, Salmerón said that Burge has made positive changes within the department and has a vision for “community-minded” policing.

“There isn’t a clear manual of what to do with the future of policing,” Salmerón said. “Police are increasingly responding to calls that are a symptom of larger problems within the community.”

Burge has been working with Council members and villagers on two initiatives: creating a citizen review board for the police department and writing a best-use policy for body-worn cameras that protects the privacy of citizens.

“This community has high expectations of its police department, as any community should,” Burge said. “My vision for this agency is that those expectations are met each and every day. This begins with the simplest of requests being fulfilled — that we engage in community policing that aligns with our core values: safety-centered, resolution-oriented, demonstrably inclusive and locally minded.”

While Village officials have praised Burge for her approach to policing, she was recently investigated, and later cleared, after officer David Meister filed a complaint against her. Meister’s complaint, filed days after Burge had been chosen as a finalist for police chief, accused Burge of obstructing justice and malfeasance when she instructed officers to have an individual transported to the hospital for medical treatment rather than serve outstanding warrants for the person’s arrest.

The complaint was forwarded to the Greene County Sheriff’s office. A report submitted by Greene County Sheriff’s Chief Deputy Douglas Doherty read in part: “I find that Chief Burge acted in the best interest of her detainee seeking medical aid, as he was experiencing a medical event. I do not believe she acted in any way other than using discretion based on her circumstances and treating a fellow human being with care and comfort.”

According to Salmerón, the investigation, which was closed on Friday, March 18, delayed his naming of Burge as police chief.

“Burge’s actions are in line with my expectations of every officer in our organization, and that is that we will prioritize the safety and well-being of every individual above all else,” Salmerón said.
That sentiment was echoed as Mayor Pam Conine, Housh and Salmerón praised Burge at Monday’s Council meeting, where she was sworn in by the mayor.

“[Burge] joined our department three years ago and has been a whirlwind ever since,” Conine said. “I have faith in her to be a very, very effective leader.”