Board of Education weighs levy options

With a handful of school levies set to expire over the course of the next five years, the Board of Education met to again consider its options at an April 25 work session. The session follows the board’s regular meeting in March, where Treasurer Jay McGrath first presented the timelines for the levies’ expiration.

Board President TJ Turner was not present for the session, which was led by Vice President Dorothée Bouquet. McGrath gave a presentation to the assembled board and began by untangling the often messy business of understanding millage and the different types of available levies.

“It can get confusing,” McGrath said.

Millage is the rate at which taxes are levied on properties. A mill represents one-tenth of a cent, and nets a municipality $1 for every $1,000 of a property’s assessed value; the assessed value of a property is 35% of its appraised value.

Each municipality in Ohio collects 10 mills of “inside,” or unvoted millage, which it then divides among its political subdivisions; the YS School District collects 4.3 inside mills, with an estimated annual revenue of $731,891, to support general schools operations.

In addition to these 4.3 inside mills, villagers have voted in another 62.13 mills of tax revenue since 1963, bringing the total current inside and voted millage to 66.43. (The News incorrectly reported in an April 14 article that this number was 64.45.)

That millage total, when calculated against current property values, doesn’t reflect the actual amount of revenue the district collects, however. Since the 1976 passage of House Bill 920, voted levies are capped at collecting revenue based on the tax valuation of properties at the time of their passage. The actual millage total for a municipality is referred to as effective millage.

When a municipality’s property values go up, the effective millage collected by voted levies must go down to maintain the same amount of revenue. The total effective millage, including revenue for general operations, permanent improvement, emergency levies and the bond issue, is 34.286 for agricultural and residential properties and 39.539 for commercial and industrial properties.

“So basically, we don’t receive growth on property tax, which is one of the reasons schools are always going out for new money — because we’re not getting the growth,” McGrath said. 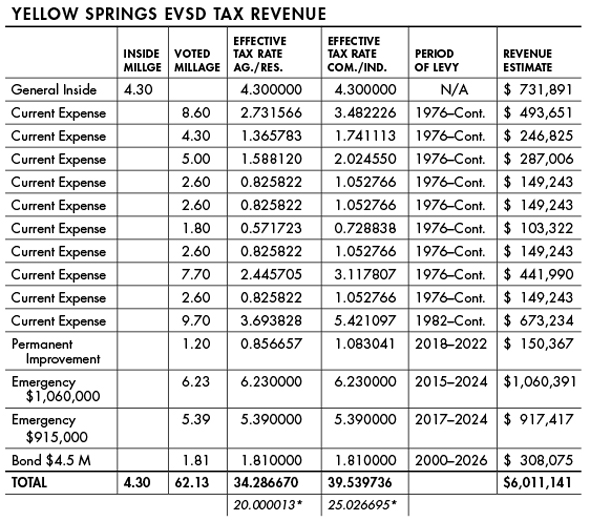 Several school levies expire over the next five years, and school board members discussed options for renewing or replacing those levies at an April 25 work session. The above data, supplied by the Greene County Auditor, demonstrates inside, voted and effective tax millage rates for the school district. Asterisks (*) denote the total effective millage for general operating revenue, minus permanent improvement, emergency and bond levies.

Because rising property values could eventually cause an ongoing general operations levy’s value to dwindle to near zero, Ohio law has also established a floor of 20 mills, below which a district’s combined effective millage for operations cannot drop. This number includes a district’s inside mills. Once a school district is at 20 mills for general operations — not including permanent improvement, emergency or bond levies — the revenue it collects based on those mills will begin to rise as tax valuations also rise.

The effective millage for the schools’ general operations based on the village’s agricultural and residential properties is currently at 20, with commercial and industrial properties at 25; both figures include the 4.3 inside mills.

McGrath urged board members to keep the 20-mill floor in mind when making decisions about renewing or replacing upcoming levies.

“The goal is to be at the 20-mill floor,” McGrath said. “Property value growth still isn’t as fast as inflation, but at least it’s something to hedge what’s going on.”

One of the largest concerns in discussion at the work session was the impending expiration of the permanent improvement levy, which funds large costs like building upgrades and buses. The current levy nets the district an estimated $150,367 per year.

“We know that the current [permanent improvement levy] is insufficient … because we’ve had to supplement it from the general fund,” Bouquet said. “So the question here is if we increase it … what is that ideal number so that we have a PI levy that is actually meeting our needs.”

“​​You’re getting growth without going to taxpayers, and you don’t have to pass a levy to do it — it’s just board action,” he said. “The downside is that it’s an unvoted increase [in taxes for villagers] — however many mills you move, that’s how many more mills they’re paying.”

Board member Amy Magnus expressed some concern about effectively raising taxes without voter input, saying she would prefer it not be the board’s “first or second” option.

“We should see that [option] as something that helps us make decisions in a timely fashion,” she said, adding that the board could “use that millage to make small adjustments” while the board determines the needed millage when asking voters to approve a new permanent improvement levy when the current one expires.

“And understanding that it’s always a moving target,” Bouquet added, “and that we are limited in growth, and expenses are not.”

McGrath suggested that the board also consider combining the two current emergency levies as a substitute levy upon their expiration. The advantage of a substitute levy for the district, he said, would be that it would continue, but not raise, taxes for current residents. Additionally, a substitute levy would net more revenue consistent with new residential growth like the proposed “Spring Meadows” subdivision.

“A new subdivision would be taxed [with a substitute levy] at the same effective millage as everyone else,” he said, later adding: “Should there be any construction growth, we could capture that, so it would be foolish not to.”

On the subject of the expiring bond issue, board member Judith Hempfling suggested that the board might seek to have voters approve a continuation of the current voted 1.81 mills as an ongoing levy.

“[It is] a good way to generate money for general expenses or PI without raising the tax burden on constituents — just maintaining,” she said.

However, McGrath said the district will likely need to pass another, larger bond issue for any needed improvements identified by the schools’ Facilities Committee.

“We’re planning and waiting until this goes off so you’re not passing two [bond issues] that will be on the books at the same time, but a future levy would need to be at a higher millage,” McGrath said.

To view background documents used in McGrath’s presentation, including one that explains millage and levy types in greater detail, visit bit.ly/3MInBBg and click on “Meetings,” then select the April 25 work session in the column on the left. A recording of the full work session is available on the YS Board of Education’s YouTube page.