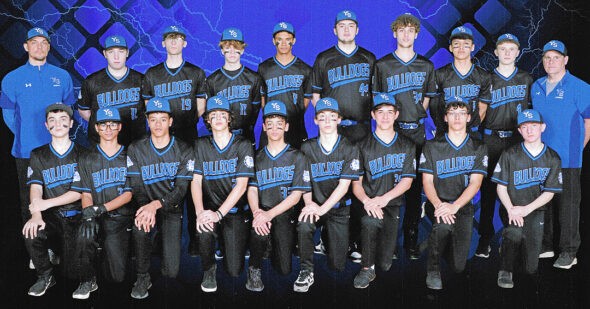 Bulldogs perform well at district meet
The Yellow Springs High School boys and girls track and field squads performed admirably at the district meet this past Saturday, May 21, at Graham High School. Three Bulldogs — senior DeAndre Cowen and juniors Malcolm Blunt and Cheyan Sundell-Turner — turned in brilliant performances that earned them a spot in the regional meet scheduled after press time Wednesday, May 25, at Troy Memorial Stadium.

Cowen claimed the district title in the high jump with a leap of 6 feet and complemented that performance with a runner-up finish in the 200-meter dash (23.43). Blunt ran a gutsy race in the 400-meter with a fourth-place finish (53.14) and also leaped to a fourth place in the long jump (19’6”), which put him in the regional meet. Sundell-Turner for the third year in a row qualified for the regionals, achieving a personal best in the 1,600 meters (5:39.61).

As a team, the girls finished in 14th place; the boys finished in 10th place as a team. Junior Josie DeWine scored an eighth-place finish in the 3,200 meters, and numerous other Bulldogs achieved season best performances. Of note were Sven Meister in the shot put and Jack Horvath in the 3,200 race. On the girls side, Ahsaha Jackson and Tiger Collins performed admirably. Seniors competing for the last time were Malaya Booth, Devyn Deal, Joaquin Espinosa, Yanne Gilley and Marin Wirrig.

Coaches Isabelle Dieraur and John Gudgel noted that the seniors were valuable contributors during their four years, which were interrupted during their sophomore year due to COVID-19 and the season being canceled. They also noted that the track team shows a lot of promise for next year, and that those who qualified for the regionals are continuing the long and successful tradition of Bulldog track athletes.
—John Gudgel, coach

Baseball team wraps up season
The Bulldogs drew a strong Franklin Monroe team in first-round play of the postseason sectional tournament. The game was played on Monday, May 16, at Franklin Monroe High School in Arcanum.

The long pregame drive and some very effective pitching by Franklin Monroe kept the Bulldogs off balance all night, as they managed to collect only three hits against the Jets. Shawn VanHoose kept his hot hitting going with excellent at bats that led to two hits and an RBI. Antonio Chaiten again took advantage of a starting opportunity by collecting a hit in his two at bats. Although Josh Clark pitched well, the Jets were able to chip away and score each inning, to eliminate the Bulldogs from the tournament with an 11–1 final score.

While that was the last official game of the year for the Bulldogs baseballers, an additional exhibition game took place Monday, May 23, at Gaunt Park, after which this year’s seniors were recognized. DeAndre Cowen and Yanne Gilley were awarded their athletic banners, after making a final trip around the bases. That last trip allowed the players, coaches, parents and fans to send up one last cheer as the seniors ceremonially bid adieu to freshman year in crossing first base, sophomore year in hitting second, junior year as they rounded third and finishing with a final wave to the fans as they crossed home plate.

That’s a wrap for yet another season of Bulldogs baseball. The coaches and players thank all who provided such great support all year and look forward to preparing for more exciting baseball next year.
—Mitch Clark, coach

Making the first team were: senior Sophie Lawson, who had a .636 batting average and was second in the MBC for stolen bases, with 20; senior Lily Rainey, who had a .524 batting average; junior Halee Sparks, who as a pitcher was 5–0 in MBC play with two no-hitters and led the league with a 4.67 ERA; and sophomore Violet Babb, who dominated the MBC as she led the league in all offensive categories with a .900 batting average, three home runs and 24 runs batted in. The 24 RBIs were twice as many as the conference’s second-place hitter.

Seniors Carina Basora and Ava Schell and sophomore Joslyn Herring were all named to the MBC’s second team. Coach Jim DeLong was named coach of the year.
—Jim DeLong, coach