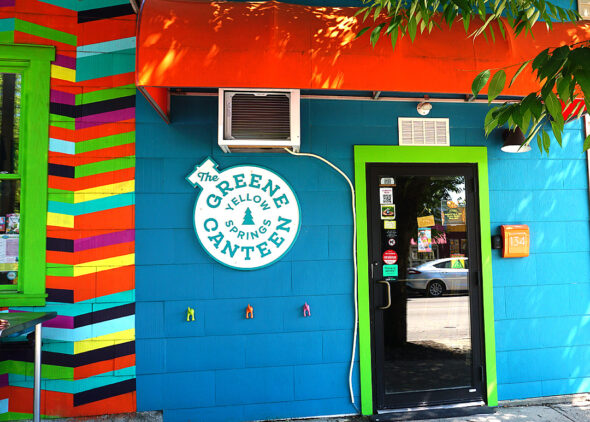 Brittany and Tim Baum, owners of The Greene Canteen, recently announced that their restaurant will close on Thursday, June 30. The couple opened the restaurant in the spring of 2019. (Photo by Lauren "Chuck" Shows)

If you’re a fan of The Greene Canteen’s healthy food options, now’s the time to make a trip downtown: The restaurant is closing at the end of the month.

Brittany and Tim Baum, owners of The Greene Canteen, announced last week via their website and social media that the restaurant’s last open day will be Thursday, June 30. The announcement cited the ongoing pandemic and health issues as reasons for the closure.

“We’ve decided to sell The Greene Canteen so we can focus on our personal health and happiness,” the announcement read, naming local restauranteur and owner of Miguel’s Tacos, Miguel Espinosa, as The Greene Canteen’s new buyer.

In an interview with the News last week, Brittany Baum clarified that, though she and husband Tim Baum have sold the closing restaurant’s assets to Espinosa, and he has taken over the lease for the Dayton Street storefront, the business itself has not been sold. Addressing some concerns she said she’s heard from customers, Baum said Espinosa will not be moving his current business into the space.

“He’s expanding to offer a new concept,” Baum said, adding that Espinosa has said he has committed to hiring The Greene Canteen’s current staff for the new venture.

“I hope people give [Espinosa] a chance, because he is going to be offering some items that were very similar to things I was offering,” she said.

The News reached out to Espinosa for comment on his plans for the space but did not receive a response by press time.

The Greene Canteen opened in the spring of 2019 with the intention of offering “clean food” and featured a menu of salads, soups, sandwiches, toasts, smoothies and juices, most of which were vegan and gluten-free. The restaurant also sold handmade pretzels, an offshoot from the Baums’ first business venture, Brezel, a bakery that specializes in Bavarian pretzels. Though locations in Grand Rapids, Mich. and Cincinnati’s Over-the-Rhine closed in the last several years, Brezel still operates in North Market in Columbus.

Baum called the upcoming closure of The Greene Canteen “bittersweet,” but said she believes focusing on one business moving forward will be best for her family.

“We just kind of realized that it’s not sustainable, what we were doing,” Baum said. “I’m feeling a little bit of a loss, but I’m also looking forward to the future.”

Baum said that Brezel, having been established now for more than a decade, has had an easier time navigating the “new normal” of the pandemic. The Greene Canteen, however, was still finding its footing as a business when statewide closures were implemented in March 2020 and were followed by heavy restrictions as restaurants reopened.

“Starting a business, you’re evolving as you go and you’re figuring out what’s working and what’s not working — but when you add COVID to the mix, it kind of throws a curveball at you,” Baum said.

A News report on local restaurants from February featured The Greene Canteen, and at that time, Baum said the restaurant had built up “a good momentum” in the months before the pandemic, but cited staffing, supply-chain shortages, cost increases and fewer tourists as roadblocks.

“I thought, when we opened the business, that we were making a very, very wise decision — that there’s always going to be people on the streets, and that simply has not been the case,” she said last week. “This past winter was really hard with the [COVID infection] spikes and it kind of just made us make a decision — a decision that I think we saw was coming, but we were trying our best to avoid it.”

She added that dividing her time and effort between Brezel and The Greene Canteen also began to affect her health, which clinched the decision to close.

Baum added that she and Tim Baum have no current plans for further business endeavors, and she looks forward to a lighter workload in the days ahead.

“I know that my stress level will be reduced, and luckily, [Brezel] in the North Market has rebounded, and it’s even busier than before COVID,” she said.

As The Greene Canteen’s time draws to a close, Baum expressed gratitude to the community and urged regulars to come out in its final days to say “goodbye” to many of their favorite dishes and to use outstanding gift cards by June 30. She also recommended that those who liked what The Greene Canteen had to offer visit The Veganry on Xenia Avenue.

“I want to stress how important it is to support local businesses right now,” Baum said. “People, in general, are really kind and supportive here. … I think that’s kind of the magic of being in this small village.”

One Response to “Greene Canteen to close doors”