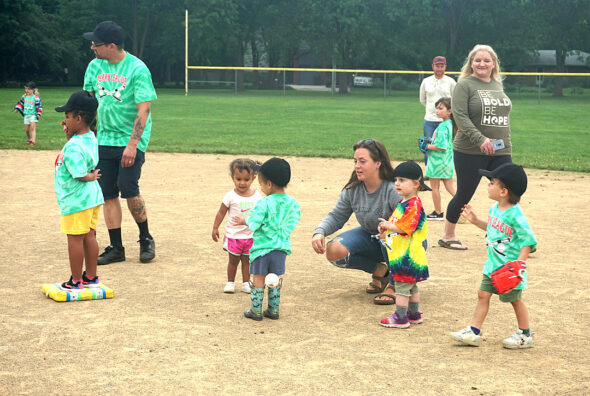 The transition in seasons from spring to summer can be observed in many ways — the progression of the calendar, cyclical behavior of animal and plant life and longer and warmer days; or other events, such as the end of the school year, the opening of the village pool and the Memorial Day holiday.

Here in the Village of Yellow Springs, a unique marker has signified the arrival of summer to generations of children raised in the village: Perry League T-ball.

At face value, it may not be immediately apparent why this children’s activity, which is common to many communities, has become so esteemed. To newcomers, the Yellow Springs Perry League T-ball program could easily be considered as just another introductory baseball league. But show up and watch, and the magic of Yellow Springs T-ball will be appreciated! Every week, without fail, special moments occur in every space on the field of play. Often it extends into the spectator area of Gaunt Park, where families make new connections or re-establish a connection made in a previous season or an earlier generation.

Not often are the moments earth-shattering; most are witnessed by one, or a select few. Although they may be mini-moments, they are usually hugely sweet and have high cuteness content. We look forward to these moments, and that is why we come! Whether you show up to watch, volunteer or play, these fun and special moments are available to all.

Last Friday, June 10, the sweet moments began over an hour before the start of play. While completing field preparation, Aiden Scott, age 5, was encountered picnicking with his mother, Tiffany, in the outfield of the minor league field while watching an older brother practice. Aiden quickly reminded us of the glorious moment he experienced during last week’s play. You see, he hit a home run — a special moment in any player’s career, a moment to cherish. It is often said “the first one is the sweetest.” His enthusiastic reminder clearly captured the significance of the moment. His dark brown eyes danced with excitement as he relived the moment in great detail.

His mother smiled broadly as she reflected on the events of the past week. She shared openly that he’d told just about everyone they’d encountered during the past week about his new-found claim to fame.

Soon after, we met another T-baller in the parking lot adjacent to the playground. He was slight in stature, but huge of heart. We watched as he methodically practiced his batting swing, one that was refined, well beyond his years. We recognized him from the previous week — it was Jaxon, age 3, a rookie, one of the many who had made their Perry League debut one short week before.

Jaxon comes from a family of baseball players, his older brothers’ influences readily apparent in his pre-game preparation. His father, George, smiled broadly as he spoke about his family’s baseball lineage. This boy came to play!

As we returned to the field, we crossed paths with father and son, Matthew and Charlie McCullough — Charlie is 6 — as they were having a catch. Raelynn, age 6, and parents were there early and practicing throwing before game time. Special moments sure to find a permanent place in the treasured bank of memories.

Another parking lot conversation disclosed Valkyrie, age 6, insisting on a shopping trip to purchase a tee in order to practice T-ball during the week.

Despite showers threatening, the flood of families began to arrive. The field was quickly teeming with enthusiastic T-ball participants.

After the run to the outfield fence and warm-up exercises, the kids lined up on the bench to bat or headed out to the infield to field balls. Volunteers Becky, Rocket, Emily, Bryan, Jake, Emma, Quinn and Clara, Jordan, Brad, Big Guy David Badger, age 6, and more, lovingly assisted little folks to practice their swing, get to bases — or not, as first time hitters have a natural and logical inclination to fetch the ball they just hit — throw in balls and wait their turn.

Hitting highlights include first-time hitter Ahva, who did not want to let go of her bat; Parker, age 4, who took his bat to first base; Evandene, who hit a home run and caught eight balls; Batman, aka Harry, age 4, who had a solid hit; and Harry’s brother, Chuck, age 5, who followed suit. Jack, age 3, smacked the ball for a solid hit and ran to first, and in his freshman exuberance, Jack kept running halfway to the outfield fence! Ren, age 5, is most improved, with a great hit after his inaugural debut last week. The focus and determination of Charlotte, age 3, provided an impressive, 720-degree rotation swing, followed by another that made solid contact, sending the ball high on a steep upward arch easily clearing the infielders for a no-doubt home run! And oh, goodness, the game faces on Miss Cardi and Marco, both 4; and Jaxson with his steely gaze and bill of his hat pulled down low over his brow for maximum effectiveness.

Visiting the batter’s bench provides an opportunity to see T-ball fashion and have some interesting conversation. A rainbow raincoat and boots were seen worn by Imogene, age 5; insect high-top shoes on Emberlee, age 3, who loves her Grandpa — he plays games with her and pushes her on the swing, we were told by her animated, darling face; Sarah’s cowboy boots; 2-year-old Callie’s shark boots; and the always fashionable bare feet on several kids, including Silas, age 8.

Theo and Evelyn, ages 4 and 6 respectively, confirmed that we’re neighbors! And, a must-mention: A princess umbrella was being sported by Alice, age 5-almost-6, near third base.

Some field observations included the always-disappearing zone of safety chalk lines. Chalk appeared in 6-year-old Charlie’s hair and on many kids’ hands and back sides. Laurelai, age 6, let me know she ate dirt and had some on her mitt, too. Eleanor, age 6,was stoic and walked off an infield injury after taking a hit ball on her shin. Mae, age 2, Adeline, age 2, Parker and Ella, ages 6, Erin, age 10, Alaina age 6, Oly, age 5, and countless others were manning the infield with consistent and diligent eyes on the ball.

We are committed to sharing and capturing moments well — as many as we can remember, for all to enjoy. We invite the community to make it a village affair, and join us Friday nights, 6:30–8 p.m., to experience Yellow Springs’ Perry League T-ball live and in person.

One Response to “Perry League T-ball | A village affair”