As the calendar changed from spring to summer this past week, recognized by the summer solstice, nature’s signals were evident too.

We experienced the hot, dry days of early summer, and regular game play on the baseball fields created a noticeable change in the surface of the infield. A perfect storm of the dust variety ensued — soil so hard, cracked and fine, its consistency when disturbed almost resembling talcum powder. The difference was noticed during the Perry League T-ball pre-game field preparation at Gaunt Park.

Although hitting, chasing and fielding baseballs are the primary activities for the participants, playing in the dirt ranks a close second. When combined with the irresistible chalk lines applied to the field, many of the T-ballers were tempted to get down and dirty! And they did! Dirt, dust and chalk was guaranteed to be in almost every nook, cranny, fanny and head of hair of those low-down T-ballers.

The activity began in earnest prior to game time with a group of landscape artists creating expressions near the third-base bag. The children gathered the soil into neatly formed piles, some of which were adorned with grass that had been pulled from the outfield. Then there is the collaborative effort of kids who have mastered erasing the safety chalk lines in order to create interesting chalk drawings and swaths of chalk on skin, hats, shirts, and whatever it will stick to!

Dirt was no obstacle to Laurelai, 6, seen lying face down in her red Marvel hat and absolutely giddy while “swimming” in the dirt. When up to bat before her good hit, she pointed out her wet shirt from ice and the Icee she had at half-time saying, “This is dirt. This is Icee. So that makes all this dirt.” 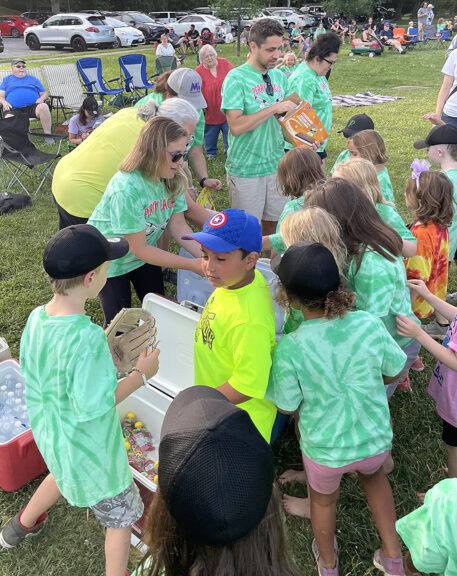 Imogene, who stated her birthday is July 14 — so she is FIVE and FOUR QUARTERS — swept up handful after handful of dirt, throwing it above her head and the heads of her pals, so they ran through the shower of dust. Other kids were calling the dirt in the air “smoke” and “smoke bombs.”
Oh, the water bills of villagers post T-ball games!

This past Friday night’s game, June 24, was a beautiful game. The beauty of the game goes far beyond the game experience; it’s also displayed in the eyes of a child — the excitement of a rookie, making their Perry League debut, as they solidly whack the ball in their first attempt. This week’s rookies included Beckett, making his debut as a third-generation Perry Leaguer, and Harlan, 6, and Allie, 7, giving outstanding first showings.

Rita Johnson, grandma to three kids ranging from 3 to 7 years of age, was our early spectator and stayed through the end of the game, enthusiastically watching all of the estimated 23,123 balls put into play during the game.

This week we had several families contribute to a “T-Ball Half Time,” where coolers of icy treats and water were distributed and available to kids and adults alike. Thanks to all who contributed!

First to bat was Ripley, 6, who brought his own bat and started the game off with a home run. Hezzy, 3, a lefty, enthusiastically made the rounds throughout the field after her hit. Violet, 6, stated she’s a “water and fire” girl. Her hit went backward on the first try, and she had a good second hit. Brees, 6, after swinging and missing, called out, “I’m doing my best.” He was a strong hitter and threw his bat down like a pro.

Gretchen, 9, likes to hit the ground with her bat several times and informs us “this is part of the warm-up.” Oscar, 6, had about a five-foot, earnest running start to bat, a la Happy Gilmore. Antonia, 8, had assistance from her father who gave instruction on how to hold the bat. Dads can be quite helpful and appreciated!

Leyna, 8, waited for the very popular purple bat. She sported beautiful rainbow braids, just in time for pride weekend. Lucas, 6, clarified that he is “Six and a HALF.” He’s the “oldest six in the world.” While at bat, he turned and waved at a grandparent. On his run from third to home he stopped a few feet shy of the tee and pantomimed opening a door while saying, “I’m opening the door to go home.”

Teddy, 4, a lefty, was ready. While past generation T-baller dad, Brendan Moore, watched, Teddy ran after his own ball after hitting it. Trudy, 3, was the first hitter after the half-time popsicle break. Brother Harry, 3, was intensely interested in getting up to bat — even willing to miss the popsicle break because he was so ready to hit the ball.

Elsie, 3, reset the ball three times after using the bat in an up-down motion like a hammer. She managed a hit after a little bit of assistance with holding the bat. Harlan, 6, whose family just moved here — welcome! — made his Perry League debut with a strong hit into the outfield.

Brendan, 5, whose favorite color is green, chose a green bat for a solid hit. Good choice, green is our shirt color this year! Theo, 4, stated, “I used to be 3 but now I’m 4!” Good hit. Theo let us know he’s a younger brother because he has short hair.

Evadene, 4, listed about five other kids she knows at T-ball, then settled in to bat the ball. Beckett, 2, made his Perry League debut with a very confident hit. Luke, 8, who plays on the Astro minor baseball team also, clearly shows his skill with a ball that went over many of the fielders’ heads. Shiloh, 5, likes to hit the ground with the bat, evidently it helps before hitting. Emberlee, 3, stated

“Three is a BIG number!” After hitting, she threw the bat and ran.

There were a couple of Birthday Princesses on the field Friday evening. Alice turned 6 on Friday and sported her Care Bear tutu and birthday tiara. And, a special mom celebrated her birthday on Saturday — we hope your birthday wish for a sleep-in Saturday came true!

As we left the field, the dust party continued as moms connected and chatted. Behind the fence, Oly, 5, and Maui, 6, piled more dirt at first base.

We have five more games this season and invite you to join us, 6:30–8 p.m. Fridays at Gaunt Park.