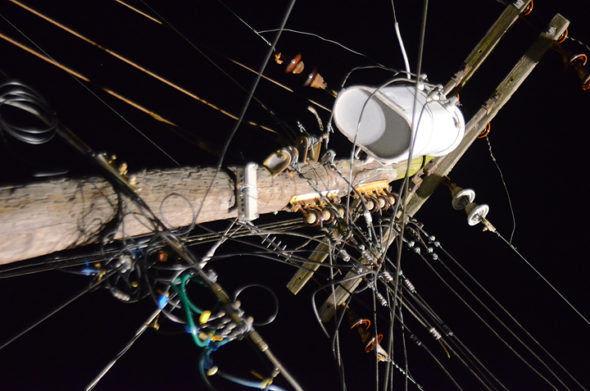 At its most recent regular meeting June 21, Village Council unanimously passed a flurry of emergency legislation adjusting the tap-in fees for water, sewer and electric utilities.

These increases follow a report from Public Works Director Johnnie Burns at the Monday, June 6, Council meeting, where Burns explained that the Village is extending utilities at a loss.

At the June 21 meeting, Village Manager Josué Salmerón said that the rate increases were adjusted to cover the cost of the hardware and installation.

“We are losing money on every meter tap,” Salmerón said.

Salmerón said the research process revealed that the Village was charging 26% of the average cost of connections when compared to municipalities that provide the same services.

“What we are proposing is to bring our rate up to the average rate,” Salmerón said. “We want to be right in the middle.”

Prior to this legislation, tap-in fees for water and sewer were $600 and $750, respectively. Tap-in rates for the electrical system include a labor charge plus the cost of a meter and the needed permits.

Council member Carmen Brown asked how much of the cost related to labor, or “people hours;”
Salmerón said that installation could take up to six hours, and that the labor cost was factored into the increase.

Also included in the adjusted rate is a “capacity charge,” which Salmerón said will cover some of the cost of servicing utility infrastructure.

“We could not just look to cover basic costs,” he said. “We are doing the community a disservice by not charging for capacity.”

In response to a question from the News, Salmerón said that those doing new construction would be most affected by the new fee schedule.

After less than two years with the Village of Yellow Springs, Finance Director Matt Dillon has resigned his position.

Dillon, who started in October 2020, notified the Village of his resignation on June 3. In an email to Village Manager Josué Salmerón, Dillon said he decided to move on from the Village “for personal and professional reasons.”

“I am very grateful for having been given this career opportunity and I will say that I have learned a lot about myself from this experience,” Dillon said.

Dillon is one of two short-tenured Village finance directors in recent years. As reported in the News, Dillon’s predecessor, Colleen Harris, also left the position after two years. Prior to Harris and Dillon, Melissa Dodd served as finance director for five years.

Salmerón has already begun the search for a new finance director, and said that Dillon will be out for the remainder of his time with the Village. The News made several attempts to contact Dillon, but he did not comment by press time; Salmerón also declined to comment on Dillon’s resignation.

Villager Lindsay Burke addressed Council to express dismay with the results of an investigation into Council President Brian Housh’s social media interactions with residents following a social media post Housh made in the wake of the Oberer Planned Unit Development being voted down by Council.

Burke asked Council members what recourse villagers have when they do not agree with the outcomes of an investigation by Council members. Council Vice President Kevin Stokes said he looked into the matter and responded to the 12 letters of complaint he received from concerned citizens.

Stokes responded directly to Burke, saying that he did respond to each complaint, and the fact that the letters were all similar was of no consequence.

“If you receive a letter from the village or the IRS the responses may seem similar,” Stokes said. “My pointed responses were the same.”

In a follow-up email, both Burke and villager Heather Horton said that they did not feel that a change to rules and procedures was enough and that Housh’s apology was not sincere. Horton said she was “surprised” that it had taken so long to receive a response from Stokes.

“I have received zero apology, neither privately nor publicly, as I’m being encouraged to accept,” Horton said. “What was presented publicly was a justification for behavior and not an accountable apology.”

“I am intrigued that folks are concerned about the process,” Stokes said in a follow-up interview.

He said that Housh’s post was “protected free speech” and that often rules are created as a result of issues that arise in municipalities.

“We passed the changes to Council rules and procedures to ensure our expectations for behavior are clear,” Stokes said. “[Housh’s] apology was vague and broad, but it covers everything that caused offense.”

Minutes before Council members voted to adjourn, Village Solicitor Breanne Parcels brought up a second executive session that was planned but canceled without Parcels and several Council members’ knowledge.

Housh said that the session was canceled and that Council would be talking about legal services “later.”

Parcels reminded Council that her contract with the Village would end on July 1, and Council would need to take action to ensure they had legal services between July 1 and whenever Council voted on a new contract with an attorney.

Housh asked Salmerón if the Village had the option to pay Parcels hourly; Salmerón said that it was an option and that Council may not need to take action. In response, Housh moved to adjourn the meeting, but did not receive a second.

Salmerón suggested that Council vote, “for the purpose of ‘dotting our Is and crossing our Ts.’”
Council approved contracting with Parcels at the hourly rate.

Further coverage of the June 21 Council meeting will appear in next week’s issue of the News.