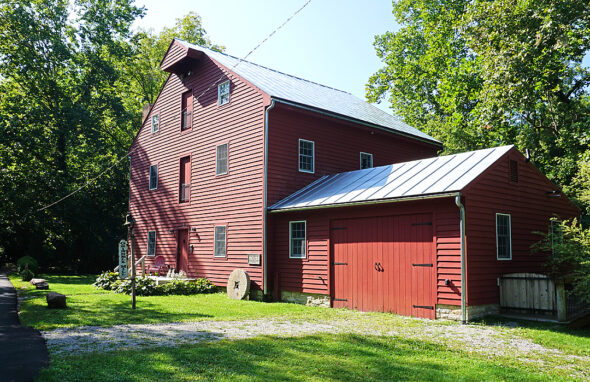 This historic Grinnell Mill, originally built in 1812, is now being operated by the Glen Helen Nature Preserve. In addition to continuing to operate the building as a bed and breakfast, the Glen will host educational programming at the 200-year-old mill. (Photo by Lynda Highlander)

Checking in with the Glen

The last few years have been busy and formative ones for Glen Helen Nature Preserve. Since 2020, the Glen has undergone an ownership change, moving from the care of Antioch College to the independently operated Glen Helen Association; received major grants for improvements; and become the home of some very industrious and popular beavers — and, of course, weathered it all through a pandemic.

And more is yet to come.

The News caught up with Glen Helen Director Nick Boutis last week to get some updates on what’s headed down the pike for the nature preserve in the coming months.

The historic Grinnell Mill, originally built in 1812 and reconstructed 20 years later after a fire, hasn’t turned out corn or wheat flour for close to a century, but it’s been an integral part of the Glen since Antioch College purchased the land for the nature preserve in 1929.

In 2003, however, it came close to being razed: That year, Miami Township Fire-Rescue declared the then-dilapidated structure a fire risk and gave Antioch University, which then owned the historic building, 90 days to come up with a plan to restore it or tear it down.

A formidable effort led by local resident Jim Hammond and aided by the Miami Township Trustees to buy and rehabilitate the mill began later that year. Four years — and a lot of restoration work from Hammond — later, the building was owned by the Township-operated Grinnell Mill Foundation and became a home-away-from-home for visitors as a bed and breakfast.

Earlier this month, the Miami Township Board of Trustees announced that Grinnell Mill would no longer be managed by the Township. The historic building is now under the management of Glen Helen, which owns the land on which it is located, and which has signed a 100-year lease with the Township to rent the building. The Glen has also assumed responsibility for paying the utilities and taxes for the building.

“It’s still a work in progress, but we’re happy to see this good news shared with the community,” Boutis said.

The mill, Boutis added, will be integrated into the Glen’s educational programming as a site for both “historical and natural interpretation,” with the aim of holding a program there every quarter.

“It’s our hope that we’ll be able to build on that and really have the mill be one of the Glen’s primary educational sites — we really see it as a wonderful opportunity for educational programmatic use,” he said.

The first such program will be held Sunday, Oct. 23, in collaboration with the YS Historical Society.

The event will feature an open house tour of the mill building itself, as well as the nearby mill race and dam, with information about the mill’s history provided by the historical society.

Boutis added that Grinnell Mill will still operate as a bed and breakfast under the management of Glen Helen and Susan Butler, who has overseen its operation for the last several years.

“For folks who know and love the mill as a bed and breakfast, they’re going to see that very little has changed,” he said. “Jim Hammond … has been gracious and helpful in terms of wanting to see a smooth transition and that the work that went into renovating and maintaining that space continues. We want to honor that.”

For the first time since its initial closure in 2020, the Glen Helen Nature Shop will reopen with regular hours on Thursday, Sept. 1. Its hours will be Thursday–Sunday, 10 a.m.–4 p.m.

Originally closed during the pandemic, and open sporadically since then for outdoor patio sales and holiday hours, the Nature Shop has undergone some upgrades — including to merchandise — during its downtime, according to Boutis.

“We’re really trying to focus on things that are local and in particular to blend the ecology and the history of the region,” he said. “So we’re excited to be able to bring it back.”

As in the past, the Nature Shop will be staffed largely by volunteers. Potential volunteers are always encouraged to contact Outreach Manager Laurie Freeman, who also oversees the Nature Shop, if interested in taking a shift or two at the register, where all proceeds will benefit the Glen’s ongoing conservation and environmental education work.

The Glen’s beaver citizens have been as busy as, well, themselves since they moved into their home on the Inman Trail below Trailside Museum. Expanding their dam month by month, their work has also meant work for the Glen, which recently completed elevating the boardwalk near the dam.

Following the flooding this year, the Glen closed the boardwalk until it could be rebuilt; Boutis added that he hopes the Glen has reached a “detente with the beavers” and that the boardwalk will outlast the animals’ continually expanding residence.

“It’s hard to imagine a better vista for a beaver dam and pond that we’ve achieved in partnership with our resident tireless rodents,” he said.

As for how many beavers are actually contributing to the construction of the dam, and whether their number has increased since they first put down roots in the Glen, Boutis said the Glen doesn’t have a “firm” calculation.

“You know what they say about their ability to populate, so that’s a moving target right there,” he said. “But we’d expect that in the lodge there’s a pair who will generate additional beavers; some of them will live locally and some will wander.”

As the News has reported in the past, the newly renovated beaver dam boardwalk was funded by a nearly $1 million Clean Ohio Grant awarded to the Glen this year; a proposal for the grant was submitted by Tecumseh Land Trust on behalf of the Glen last year, and the Village provided matching funds of $125,000.

The grant will also help fund more boardwalk, bridge and trail updates over the next year, with additional funding, Boutis said, from smaller grants and individual contributions. The updates will also include installing ramps to the Birch Creek Cascades and the Yellow Spring in order to increase accessibility to these areas for people with limited mobility.

Boutis said that Glen visitors may encounter some trail closures as work begins in earnest over the next year, but that they will be marked with ample signage.

Also funded by the Clean Ohio Grant is the demolition of Antioch College’s defunct power plant, which supplied the campus with coal-powered energy until the 1990s. The now-crumbling structure poses an ecological threat to the wetlands that surround it, with friable asbestos and coal ash from the structure being washed into nearby waterways as runoff after rains.

Demolishing the plant will provide the Glen the opportunity to forego that runoff and work to restore the wetlands.

Boutis said the Glen is currently preparing the site for demolition, which he expects to take place in September or October this year. Fillmore Construction has been contracted to complete the demolition.

Boutis said that villagers and visitors won’t see much of the work being done, but that there will be “a day or two” when the demolition crew is working to remove the plant’s smokestack that may cause some disruption. When that happens, the Glen will work with the Village to close the bike path and nearby road to traffic to ensure safety.

“We’re excited to have that come down and to start the long, slow restoration of that area,” Boutis said. “It’s gonna be wild.”