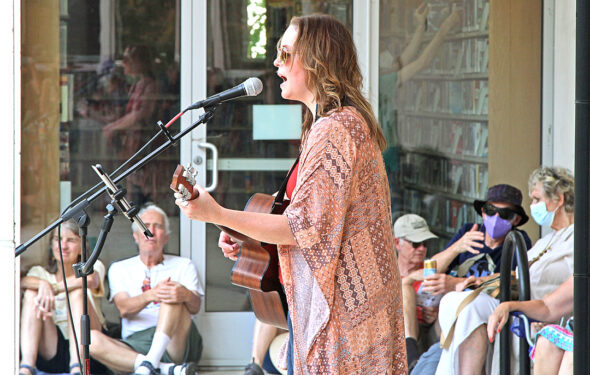 Singer/songwriter Rachel Litteral belted bluesy tunes in front of the YS Library during this year’s PorchFest. She was among about 70 performances that took place Saturday, Sept. 17. (Photo by Ben Guenther)

Commentary | The songs and sounds of my village

One really could not have asked for a better setting for this year’s PorchFest. The sky was dotted with clouds; the sun shone brightly yet not too hot, and the air was light and breezy with moderate humidity.

And a new setup for this year’s event spread musicians further around the village, which not only allowed for more music, but also provided an additional buffer that prevented performances from bleeding into one another. Taken on the whole, with a diverse offering of musical genres, PorchFest truly was a day for everyone to enjoy.

I began my afternoon on Dayton Street at Rose & Sal, which has morphed from a funky, impromptu pop-up venue to a regular setting for live music in the village. Things kicked off with local producer JFX316 — aka J. Whittaker — and his nebulous brand of electronic music. The vibe was quick to catch, and the bar set high for the day. But with so many acts to see, I reluctantly moved on; thankfully, like many other artists on the day’s lineup, Whittaker has made his work available on Bandcamp and other digital platforms.

After a pleasant surprise on Elm Street, where Fugitive Strings covered Traffic’s “Dear Mr. Fantasy,” and a quick stop on Phillips Street to hear the Yellow Springs Brass Quintet’s rendition of “Let It Go,” from the animated film “Frozen,” I settled in on High Street for the acoustic stylings of Les Groby. The pairing of Groby’s gentle vocals with his Gibson created an intimate setting for the small, gathered crowd, and for the remainder of his set I lounged in the shade and basked in the melodies.

Over on Whiteman Street at the Octagon House, Mariah J engaged the crowd with her original R&B and neo-soul, and in King’s Yard, Tom Clevenger crooned a song to his beloved before a sizable crowd. Around the corner, in front of House of Aum, hip hop emcee Tronee Threat spit impassioned rhymes and shared his story with the group that had amassed. His musical journey was interrupted by more than a decade of incarceration, but since his early release, he’s picked up where he left off, undeterred by the hiatus.

A large crowd waited patiently on Limestone Street as Mark Babb tuned up his weathered acoustic guitar. He introduced Lucy Dennis, a teenage singer with a set of grown-up pipes, who proceeded to transfix the audience with her interpretation of Leonard Cohen’s masterpiece “Hallelujah.” Such an undertaking is no small task, yet the duo performed with dignified poise. As I looked around at the faces of those in attendance, each had their own contemplative countenance. Some stoic, some in tears, all enchanted, every soul was undeniably moved. This would prove to be the most profound moment of the day.

I ducked around the corner to the Yellow Springs Community Library to catch a bit of Rachel Litteral’s folksy blues rock; hustled down Xenia Avenue to Corry Street, where the Yellow Springs Ukulele Club band strummed away outside the Yellow Springs Arts Council; then hiked across the village to Lincoln Court for compositional insight and unique rhythms from percussion duo Neutrals.

As I headed back toward downtown, I stopped off in a backyard on Winter Street. Folk duo Michael Manley and Katie Harford performed for a lawn full of guests in perhaps the most scenic setting of the afternoon, perched upon an expansive deck beneath a towering maple tree. As the hour neared 4 p.m., I booked it to Millworks on Walnut Street. Out in front of Tuck-N-Red’s, local metal band Doctor Meat blew the doors off. They were loud, they were energetic, and they had the biggest crowd of the day; the intensity these guys brought to their show cannot be understated.

As 5 p.m. drew near, it was time for me to head into Yellow Springs Brewery for my evening shift behind the bar slinging beers. It was far too busy to head out back and enjoy indie rock band Ease The Medic, but clearly others did. It was also obvious, as I interacted with the mass of patrons, that PorchFest was a massive success. The guests, as varied as the music of the day, carried a sense of enthusiasm and excitement with them, undoubtedly satisfied with all they had heard. After five hours of hoofing it around the village in the summer sun, I was content as well, despite my exhaustion. I had a plethora of new music to check out after my shift, and a reason to look forward to next year’s festivities.

*The author is a freelance writer and photographer for the News, and is interested in the arts, the outdoors and social issues. He can be contacted at misterguenther@gmail.com