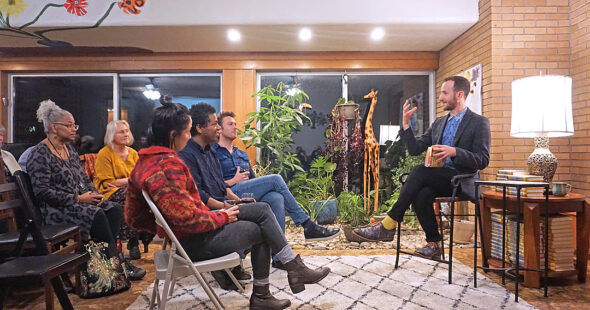 Following the release of his most recent book, “Before All the World”, Moriel Rothman-Zecher returned to his parents’ home in Yellow Springs to offer a reading on Saturday, Nov. 12. (Photo by Jessica Thomas)

‘Before All the World’— Rothman-Zecher talks new novel

“I do not believe that all the world is darkness.”

Those are the words of Gittl, one of three main characters in Moriel Rothman-Zecher’s recently published novel, “Before All the World.” Spanning the years between 1919 and 1936, Rothman-Zecher’s novel explores a town where the worst has happened — all of its Jewish inhabitants have been killed, save for two, Gittl and Leyb, who, years later, find each other in Philadelphia.

The News recently spoke with Rothman-Zecher about this, his second piece of fictional writing after years of writing nonfiction and poetry. Rothman-Zecher, who grew up in Yellow Springs, said writing another novel was a continued exploration of how an author can use fiction to present difficult subject matter.

“I found so much more ability to be truthful in sketching these people,” Rothman-Zecher said. “These stories tell us a deeper version of the truth by not lying about the surface level.”

“Before All the World” draws on stories told to Rothman-Zecher throughout his childhood, he said, giving the example of one of the book’s settings, Philadelphia, where Gittl and Leyb find each other years after the massacre in their European home, the fictional Zatelsk.

“I knew I wanted to write about Philadelphia,” Rothman-Zecher said. “It’s where my grandparents, who both died recently, were from and I wanted to be in touch with them in some way, to be in conversation with my beloved dead.”

In order to develop a conversation with Jewish beloveds, “Before All the World” includes a frame story — one where Charles, a Black American who speaks Yiddish, translates Gittl’s stories for an English speaking audience. Readers will notice the novel’s characters speak both English and Yiddish, offering translations for some words while other sentences are written to convey the experience of thinking and speaking in two languages.

“There’s this way in which we can overprivilege meaning and forget about how important sound is,” Rothman-Zecher said. “Sometimes it’s OK to sound out a word and have the sound of the word exist in your mind or in your mouth or in your ears and move on.”

As the translator, Charles occasionally leaves footnotes for clarity, or sometimes just to add his perspective.

“The footnotes are part of the story,” Rothman-Zecher said. “They’re also a way of developing the character of the translator, who was translating for an imagined audience in 1936.”

As for the plot itself, Rothman-Zecher said that he wanted to tell a story that is often overlooked, a story of Eastern European Yiddish-speaking Jews.

“I knew there was going to be a catastrophe at the center,” Rothman-Zecher said. “If I was writing a book about Yiddish or about the Yiddish language I had to tell the story of a language stopped short by catastrophe.”

While most readers are familiar with the horrors of the Holocaust, the history of pogroms, or mass murders of Jews, is not widely discussed. Scholars such as Eugene M. Avrutin and Elissa Bemporad estimate that nearly one million Ukrainian Jews were harmed or killed during pogroms.

“If you think about [one million people], that in and of itself is a sort of unthinkable catastrophe,” Rothman-Zecher said. “It is barely mentioned, perhaps because it was mostly Eastern Europe, where Jewish communities were poor and did not have the sort of connection and heft of Jewish communities in Western Europe.” 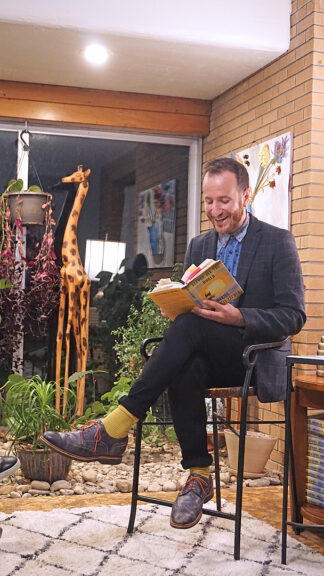 In order to acknowledge the lives of those lost, “Before All the World” includes a chapter in which Gittl, one of two survivors of the pogrom in Zelinsk, attempts to memorialize the 300 people who were killed.

“She’s not a religious character; but for the sake of her fellow villagers, many of whom were religious, she says the words that [the community members] would have wanted said. She tries to bury each of them and can’t even come close,” Rothman-Zecher said.

Speaking the Yiddish words, “burikh dayen ho’emes,” or “blessed is the true judge,” Gittl’s memorialization goes on for pages, which Rothman-Zecher said was an experiment with the novel’s form.

The section, which reads like lines of poetry, asks the reader to mourn with Gittl as she faces the loss of her community, her friends, her parents and her four siblings.

“It’s an excruciating and essential practice of attention,” Rothman-Zecher said. “What does it mean to move through the world trying to continue to feel the loss of every catastrophic death?”

While the reader is encouraged to meditate on the depths of loss and grief, Gittl’s poem (her list of names and blessings for the dead), which she publishes in a Russian publication called “Marx’s Beard,” is a catalyst for her journey to Philadelphia, where she reunites with Leyb and Charles and continues to remember the tragedies and joys of her past.

In writing Gittl and Leyb, Rothman-Zecher shows readers the importance of language to one’s experience. Both Gittl and Leyb speak a mixture of English and Yiddish, a combination that works to express their thoughts as they experience Philadelphia through the eyes of immigrants. In one maysech, or story, Gittl  describes the villagers of Zatelsk as they mourn the death of a village elder and her own yearning to leave the village:

“All there was being in Zatelsk were bumps of earth in what the people of Zatelsk were buried, like her own bobeshi eleven and a half months earlier, dead from one of Zatelsk’s many jewailments, whole burial had been a briskish affair, she was old anyway, fifty-seven, they told themselves, yisgadal v’yiskadash.”

Rothman-Zecher said he intentionally included the Yiddish to recognize its survival despite the decimation of millions of Yiddish speakers.

“It’s not a language that is admired or one where the speakers are taken seriously until you start to tap away at the surface,” Rothman-Zecher said.

Including Yiddish, he said, was also a way to fall in love with the language.

“There’s gorgeous eroticism in the language, and there’s some really serious politics,” Rothman-Zecher said. “You have Yiddish poets working in solidarity with Palestine and poetic campaigns against lynching.”

Another feature Rothman-Zecher included was the tension and hostility toward immigrants, queer people and leftists, illustrated through Charles, and Leyb, both of whom are queer.

“It’s writing a novel as a way of being in conversation with people I can’t actually talk to,” Rothman-Zecher said. “What if I imagine this relationship? What if I imagine these two characters are a Jewish kid and a Black Philadelphian and it’s sometime before World War II? I wanted to imagine what that time and space was like.”

Elaborating on the possibility of a Black Yiddish speaker, Rothman-Zecher gave examples of organizers, performers, and thinkers of the 20th century, like Paul Robeson, who spoke Yiddish.

“Finding these kinds of great Black intellectual thinkers, artists, with this connection to Yiddish was this exhilarating thing for me,” Rothman-Zecher said, highlighting the long history of solidarity movements between Jewish people and Black people.