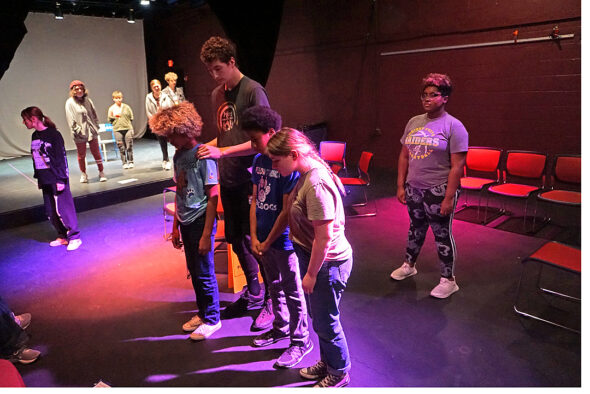 Getting to the core of what it means to be antiracist has been a topic of discussion in the national public eye over the last several years. The issue can be tricky, however, for people to wrap their heads around: What makes the difference between not being racist and being antiracist, and what can one do to be the latter in addition to the former?

Those questions and more are at the center of “Five Scripts Toward an Antiracist Tomorrow,” a theater work being mounted by the young thespians of McKinney Middle and Yellow Springs High schools Thursday–Sunday, Nov. 3–6, at the Foundry Theater. Admission is free.

The work incorporates five short scripts interwoven to create a single play, the narrative of which is crafted from the memories of its lead characters, moving backward and forward in time.

“​​[The piece is] centered on a family going through the world and trying their best to simply exist and showcase the hardships that go along with that in a very real and, unfortunately, very dramatic way,” said Stephanie Radford, who directs “Five Scripts.”

Radford, who is director of education at DaytonLive, said she was brought on to support the project by McKinney and YS High School performing arts teacher Lorrie Sparrow-Knapp, with whom Radford is acquainted via her years-long involvement with the Yellow Springs Theater Company.

“[Sparrow-Knapp] has been trying to get me out for years,” Radford said. “So when she presented me with this project, I knew … the best way for me to be a part of it was to direct it.”

Sparrow-Knapp, who typically directs fall productions in the schools, serves as technical director for this production. She’s intentionally kept away from most rehearsals so that Radford has the space to lead the cast in her own way. It’s important, she said, for the burgeoning actors to learn to work under different directorial styles, adding that Radford’s specific creative vision is paramount for this show.

“She brings a different ethos to our program,” Sparrow-Knapp said. “She’s creating safe spaces, and it’s important for [the cast] to be led by a Black, female voice.”

In addition to directing, Radford worked to knit together the show’s narrative from several previously unconnected short works. “Five Scripts” incorporates four plays from poet and playwright Idris Goodwin, which he released in 2020 as part of a project called “Free Play,” offered to be used for free by young thespians on the condition that they be performed for free. Each of the pieces aims to look deeply into situations that meditate on, rather than directly define, antiracism.

“Being not racist isn’t the same thing as being antiracist — it’s less a compliance and more an active role,” Radford said. “So [Goodwin] created ways to showcase that difference.” 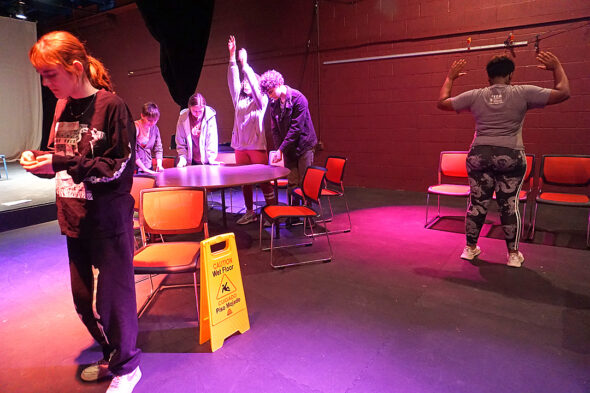 Goodwin’s short plays include scenes in which Black characters struggle to be heard and understood by their non-Black neighbors and friends. In “Black Flag,” the show’s main character, Jules (Gini Meekin), hits it off with her white college dorm roommate, Sydney (Eve Diamond) — until Sydney, a Georgia native, hangs a Confederate flag over her bed. “Nothing Rhymes with Juneteenth” sees an older Jules helping her teenage son, Pete (Jaden Douglass), write a rap about Juneteenth for a school project, and in “#Matter,” Jules and longtime white friend Cole (Olive Cooper) disagree about what motivates police violence against Black people. In “Water Gun Song,” an older Jules has a conversation with her young son, Sam (Oshri Pascal), after he has come back from a white friend’s house, where they played with toy guns.

Radford said the issues brought to light in these and other scenes may challenge non-Black audience members to think outside the ways their experiences have shaped how they see the world.

“[Playing with toy guns] is just one of the many conversations that Black parents have with their kids throughout their lives,” Radford said, recalling the 2014 death of Tamir Rice, a 12-year-old Black child who was killed by police while playing with a toy gun. “If you don’t know the risk of losing your kid to a toy gun, you don’t see it as a risk.”

Sparrow-Knapp said she chose Goodwin’s plays to produce after a long period of looking for shows that not only featured Black characters, but centered Black experiences. The search was spurred, she said, by a conversation with former student Annlynn Foster in 2019.

“[Foster] said, ‘Ms. Sparrow-Knapp, why don’t we do plays about Black people?’ And I looked at her and said, ‘That’s a really good question. And I don’t have a good answer. So let’s fix that,’” Sparrow-Knapp explained.

After finding Goodwin’s plays and discussing them with Counselor John Gudgel, McKinney Middle School Language Arts teacher Jaime Adoff and Principal Jack Hatert, Sparrow-Knapp asked Radford to come aboard as director. But Radford felt as though a piece was missing to anchor all of Goodwin’s works together.

Radford suggested tethering the works to a one-act play by G. Riley Mills and Prince Roc, “Lift Every Voice.” That play, which is based on a true story, dramatizes what happens between six high school students after one of them posts an inflammatory racial message on social media.

Both Radford and Sparrow-Knapp felt that entwining “Lift Every Voice” with the narrative of Jules and her family was the thematic element they’d been looking for.

“[Jules] is kind of the thread for all the ways that these issues are manifesting across our culture and how one family can be tied to so many things,” Sparrow-Knapp said.

Radford said she sees the production as an opportunity for its audience to “take a moment for self-examination,” which the showrunners will help facilitate via moderated talk-backs with the cast and director after each performance. She described the show’s elements as sometimes being “morally gray” and rife for post-show conversation.

“What we have isn’t [characters] who are 100% right or 100% wrong,” she said. “What we have is the successes and failures that come with being human and dealing with systemic racism.”

Audiences will see that struggle starkly presented in the show’s white set, which will be painted with the names of Black Americans who have been killed by police and other perpetrators of hate crimes since 2017 — more than 1,000 names.

For the young cast, embodying the show’s heavy themes has often meant being vulnerable in new and challenging ways, reckoning with the harms their characters sometimes inflict or suffer.

To help keep the actors grounded, Radford brought villager Justin Howard into the production; Howard, who previously worked with Radford in Dayton’s Black Box Improv Theater, has been working with the cast at rehearsals to employ improv techniques before delving into their characters.

“As a teenager, it’s really hard because you tend to be super self-conscious,” Howard said. “Improv is really good for just loosening people up, but also trying to get them to be able to connect to a character and be okay being vulnerable.”

Radford said that, despite the challenging nature of the material, the cast has brought a consistent passion to “Five Scripts.” At the end of a recent rehearsal, before giving notes to the cast on their performances that night, she took a quiet moment to tell them that their ardent work had not gone unnoticed.

“Theater exists to tell stories; sometimes the story is fun and great and wonderful — and sometimes this story is fun, too,” she said. “But the importance of the story you’re telling is unmatched in Yellow Springs, and your lift is heavy. So the seriousness with which you approach it and the time that you dedicate to it is so appreciated.”

“Five Scripts Toward an Antiracist Tomorrow” will be performed Thursday–Saturday, Nov. 3–5, at 8 p.m., and Sunday, Nov. 6, at 2 p.m., at the Foundry Theater. Admission is free; seats can be reserved at showtix4u.com/event-details/66915. Each performance will be followed by a talkback session with the cast and crew, moderated by Steve McQueen and Jessica Thomas. A 50/50 raffle will be held at each show, with the proceeds going to the YS Reparations Fund and YSHS Theater Arts Association.