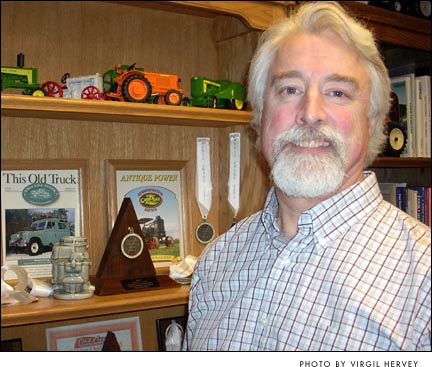 Pat Ertel, owner of Ertel Publishing, is celebrating the 20th year of publication of Antique Power, a tractor collector’s magazine, at his offices in Yellow Springs.

How does one go from being an aerospace engineer at Wright-Patterson Air Force Base to the publisher of an antique tractor magazine? This is a question Patrick Ertel has been asked repeatedly over the last 19 years. But wait! It gets better. En route to becoming a tractor aficionado, he was also a sports car enthusiast. However whimsical these enthusiasms might seem to others, in Ertel’s mind they are connected with simple logic.

Twenty years ago, with a degree in mechanical engineering, Ertel spent his days pursuing his profession at the base and in his spare time writing and taking photos for a sports car magazine. One day in the spring of 1988, driving his Porsche to a sports car show, he found himself stuck behind a man hauling an antique tractor on a trailer. Having grown up on a farm in Cedarville, Ertel recognized the machine as similar to one he had driven as a kid. In a rush of nostalgia, he decided to pass up the sports car meet and instead followed the farmer to a tractor show at Hueston Woods State Park.

Amongst the tractors and other antique farm equipment, Ertel became instantly hooked and started asking the participants how he could keep in touch and learn more. He soon found that ways to share information in the world of antique tractor collectors were sadly lacking.

Back at the offices of the sports car magazine, Ertel complained to his editor about the dearth of communication in his new area of interest. “Sounds more like an opportunity than a problem,” the editor told him. Within weeks, Ertel was laying out a magazine on his dining room table. Nineteen years later, the November/December 2007 issue of Antique Power kicked off the magazine’s 20th year.

Ertel began his enterprise by telling folks at tractor shows that he was starting a magazine and lining up subscribers for a January 1989 issue, he said in a recent interview. But by September 1988, he had enough subscriptions to go to press, so he moved up the start date to November. Once the magazine got off the ground, he found himself attending tractor shows almost every weekend and soon, between his avocation and his engineering career, he was working harder than ever. He kept his day job for two more years until his hobby became his full-time job.

“I’m having more fun and making more money,” he said.

For the magazine’s first few years he and his then domestic partner, graphic artist Lori Beckman, continued to lay out the magazine on the dining room table of their home on Davis Street. Another friend, Jerry Keyser, dealt with the printer and the post office. Ertel continues to credit them with the magazine’s early success. Ertel did all the writing and took all the photos. Eventually, the business was run out of a house on Glen Street and had six employees.

His experience with early computers as an engineer led Ertel to embrace desktop publishing when it first came along. Part of the magazine’s success, according to Ertel, is due to the fact that he has kept its publication on the leading edge of technology. “It helps to keep the costs down and the quality up,” he said.

Today, Antique Power, which focuses exclusively on antique tractors built from 1892–-1970, is mailed to every state and Canadian province plus 14 other countries. It has 50,000 subscribers and a circulation of 60,000 including newsstand sales, and does $2 million in gross sales.

Ertel is especially proud of the fact that Antique Power still has its first subscriber, Lyle Dumont, one of 25 people he has identified as “lifetime subscribers” as a part of the magazine’s celebration of its 20th anniversary. The lifetime subscribers will all be getting a commemorative model tractor.

“More than half of the subscribers to the first issue are still getting the magazine,” Ertel said.

Over the years, Antique Power, Inc. has morphed into a publisher of a different sort, taking on two more magazines, Vintage Truck and Civil War Historian, and recently going into the business of custom publishing of books and magazines. The business also underwent a name change in October and is now called Ertel Publishing.

The custom publishing end of the business involves, among other things, taking care of the day-to-day details of the publishing process for other magazines, thereby freeing up the publisher/editors to concentrate on content.

Graphic artists Jamie Sharp, Jeremy Cundiff, Suzanne Stevens and Jason Dewitt earn medals for their art work every year against big magazines like Road and Track and Motor Trend, according to Ertel. Peggy Shank, who used to report for the Yellow Springs News, works for Ertel Publishing as an editor; Benjamin Smith is the managing editor of Civil War Historian; Vicki McClellan handles public relations and sales; Jamie Lee Hamilton is the office manager; and Judy Pitstick is the bookkeeper.

Ertel, himself, has won International Automotive Media Conference Excellence in Automotive Media awards for his writing. Yet he still attends tractor shows where he sets up a booth that resembles an antique gas station to promote the magazine and enlist subscribers.

“I feel a great deal of pride when I’m at the shows, experiencing the joy of showing the magazine,” he said. “If you are an enthusiast, it really curls your toes.”

According to Ertel, the future of Ertel Publishing lies in the custom publishing end of the business. To do that, he said, they have to find “more magazines whose owners want to be managers and editors and not deal with the nuts and bolts.”

“When I started I knew nothing about tractors or the magazine business,” Ertel said. “It makes me feel good to see so much enthusiasm for what for me was a hobby a few years ago.”