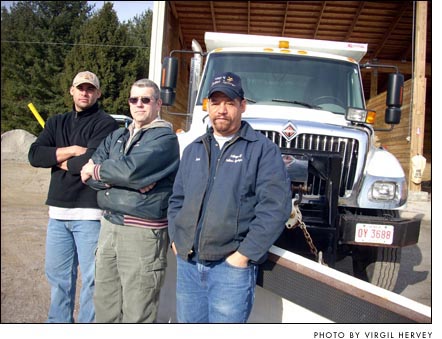 Getting plowed is serious business with the road crew guys

While meteorologists have been reporting above average snow fall this winter, the guys in the snowplowing trenches in the village and Miami Township keep seeing a bleary-eyed vision of the theme they’ve dealt with all year: more snow, more salt, more man-hours.

According to Miami Township Road Superintendent John Finn, the kind of weather the area has been getting this year, lighter but more frequent snowfalls and lots of freezing rain, has been more expensive for the township.

“We were out more often,” he said in a recent interview. “You can’t plow a little snow, so you end up using salt. And the only thing you can do with freezing rain is put more salt on it.”

Not only has this meant more trips around the township’s 13.4 miles of roads, it has meant extra trips to Xenia to get salt from the county.

And that was before last Friday. When the meterologists began predicting a monster storm, the trucks were loaded with salt and crews told to stand by. The flakes began falling right on schedule and within two hours Village snowplow operator Kent Harding and Village Street Superintendent Dave Conley were out scraping the village roads, with street crew employee Jason Hamby scheduled to relieve them at 2 a.m.

By the time the storm ended on Sunday, Jane King and Kelly Fox had been called in from other village crews to assist with the plowing. Even Police Chief John Grote got into the act, cleaning the Bryan Center parking lot with a snow blower. On Sunday, they started fixing up what they had missed and began salting the roads. They finally quit at 3 p.m Sunday.

According to Harding, by the time the big storm was over he had put in more than 24 hours at time-and-a-half and seven hours of double time. You can multiply that by five to get the total overtime for all the crews, Conley said.

The village’s trucks are outfitted with communications radios and the drivers also carry cell phones that double as walkie-talkies for those times when radio traffic is too heavy. On Saturday afternoon, they picked up a squad run to North College Street and the plows immediately diverted to the area to make sure the ambulance could get in.

Occasionally the drivers will have to deal with whiteouts. “There were times I couldn’t see the blade of the plow,” Conley said.

According to Hamby, in those places where there are no street lights, it can be hard to see the edge of the road.

“Sometimes you don’t have any idea where the street is,” Conley said.

“It gets boring,” Harding said. “You are just out there by yourself, staying awake and trying to watch the road.”

Hamby, who has been on the job for only three years, disagreed. “I honestly enjoy it, watching the snowfall, getting hypnotized by the flashing of the beacon,” he said.

According to Harding, who has been on the job longer, that is typical of the new guys. He once felt that way too, he said. But it gets old after awhile.

Asked how they manage to stay awake, Harding said they drink a lot of coffee. The dispatchers have hot food for them and they get coffee there and at whatever store is open. Sometimes people offer coffee to the drivers out of gratitude, Conley said.

Despite the size and weight of their vehicles, black ice is a danger for the snow plows just as it is for cars. When you hit the brakes, you just keep sliding, Harding said. And when you are pushing a lot of snow, it is hard to turn.

There are 52 miles of roads to plow in the Village of Yellow Springs, plus parking lots, and obstacles, such as parked cars and downtown streets that sometimes require snow removal. Conley agreed with Finn that there was less plowing and more salting this winter. According to Conley, the village has used approximately 200 tons of salt, about twice the normal amount.

The police call when the roads get slick, Conley said. “Fortunately, there were no bad accidents this year.”

Ohio law limits the amount of time a snowplow operator can drive in one shift to 16 hours. Village crews were pushing the limits this winter, Harding said. According to Finn, at times, he and full-time township employee Daniel Gochenouer were working 12-hour shifts.

As for potholes in the village, “We’ve got some dandies,” Conley said. “The streets that were recently repaved are okay, but streets like Whiteman, Davis, and Phillips are in bad shape.”

Asked if he had any bad weather advice for villagers. Hamby said, “Slow down and stay back from the salt-spreaders. People don’t realize how far back they throw the salt.”

“Keep your cars off the street,” Harding said. “And if you don’t have to be out in it, don’t.”