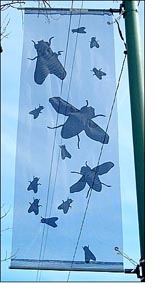 The 2008 Banner Festival banners flying over downtown are the work of local banner-makers including, from left, Kate Burch, Katherine Merrill and Terri Schoch. Merrill and Schoch, along with Maxine Skuba, organized the project.

Just when you think you’ve reached your limit of gray skies and brown grass, a bright spot of color appears in the shape of…a five-foot tall blue bug? a purple horse? a majestic macaw? These and other images started sprouting up between the treetops in downtown Yellow Springs the last week of March, providing much-needed relief to dreary-weary residents. The colorful works of art are on display courtesy of Yellow Springs Banner Festival 2008.

Banner Fest founder Maxine Skuba, in a recent interview, said the fest was intended “to counteract the winter blahs.” Banners are her business.

“I’ve been making banners professionally out of my home for corporations and individuals and Yellow Springs since the early ’80s,” Skuba said. “I also did a series for Dayton International Airport. Eventually, I wanted to make my own thing. I knew I couldn’t make a bunch of my own so I gave a workshop.”

The Banner Fest became an annual event with other people taking over the role of coordinator after Skuba moved to Columbus.

When she returned to Yellow Springs in the mid-’90s, Skuba and local resident Katherine Merrill teamed up to coordinate the event. Gradually however, as leadership changed and personal schedules interfered, interest dropped off. At the beginning of 2008, Skuba, Merrill, and local artist Teri Schoch got together and made the commitment: “Let’s do it this year.”

“I see banners as a public art form,” said Skuba. “When there was a lot more participation, there were family members who got together to make one. Various classes at Antioch School and Mills Lawn have done one. Friends Care Center did some. We’ve had a lot of community participation in different forms. That’s what we want to get back.”

Starting up the effort again has been slow.

“I have the fear that the Banner Fest has run its course and I’m hoping that it hasn’t,” said Skuba. A total of 17 poles are available at various locations around downtown. This year, 11 banners were submitted. Most are newly created but a few were taken out of storage to fill in some of the slots. Unfortunately, the handmade banners will only be up for six weeks.

“The reason for that,” said Skuba. “is that we pay for the material out of our own pockets. When the sun gets stronger it can be very harsh on the banner fabrics and they will disintegrate faster. We take them down to preserve them so the owners will get more use out of them.”

Chris Glaser started making banners for the fest in ’94. When his banner came down at the end of each fest, Glaser would continue to hang it in his front yard.

“The sun comes up over the hill and it looks so cool,” he said. “I kept it up until it was gone. The Buddhists would call that impermanence. It was just a joy. I just wanted to see it as long as I could.”

Glaser’s inspiration for this year’s banner was his friendship with long-time Yellow Springs resident Elaine Comegys, who died this past November.

“I was friends with Elaine and always admired her,” said Glaser. “I worked with her son, Marco, quite often. I wanted to do the banner in memorial. It was nice this time that we got to choose the spot where our banner would hang.” Glaser chose the corner of Xenia Avenue and Corry Street — right across from the bench where Comegys used to sit and the setting for his design.

Other locations are equally significant. What’s black and white and read all over? Charley Slattery’s banner at the intersection of Corry and Dayton Streets. This bike mechanic’s passion is hard to miss, hanging directly across the street from the Village Cyclery where he sometimes works.
As Skuba’s partner, Slattery had a distinct advantage: immediate notice of the fest. “I’m living with Maxine,” Slattery said, “and she says she’s going to revive the Banner Festival. I told her, ‘I’ll do one.’”

For a first-time effort, Slattery breezed through the learning curve. “I’ve sewn clothes and patches before so I knew how to use a sewing machine,” he said. “The hard part was just getting used to having all that fabric to work with. I enjoyed it. I think I made it in three days. Maxine was using up all the studio space with all the patches she used for her banner and I couldn’t get in there. Otherwise I would have done another one.”

Another first-timer was fiber artist and Dayton resident Kate Burch, who has been quilting for seven years. As a member of Village Artisans, Burch was asked if she would create a banner to represent the artists cooperative. She chose a quilting design to hang across from the gallery.

Merrill says she remembers a time when there were so many participants they needed two different showings. “One group would go up for a month and then those would come down and the other group would go up,” she said. “I’d like to see that happen again maybe with the schools participating. My son designed a banner one year. It’s really nice when kids participate.”
Have there ever been any mishaps with the banners?

“I had a banner that went in upside down!” Merrill laughs. “The Village crew was wonderful. They fixed it right away. I think it’s terrific that they take the time to do this. They’re very accommodating.”

Next year the coordinators hope to start publicity earlier and give people more time to come up with an idea so they can plan out the process more carefully. They also hope to offer workshops for sharing techniques.
“It would be nice to have a theme sometimes,” said Glaser. “Peace, or maybe Beatles’ songs.”

What does he suggest for optimum viewing time? “Evening is nice when the sun is going down,” Glaser said. “Mornings too, when the sun is lower and the banners take on a stained glass look.”

For more information and a view of past banners, go to http://www.tschoch.com and click on Yellow Springs Banner Festival 2008.

* The author is a free lance writer for the News.