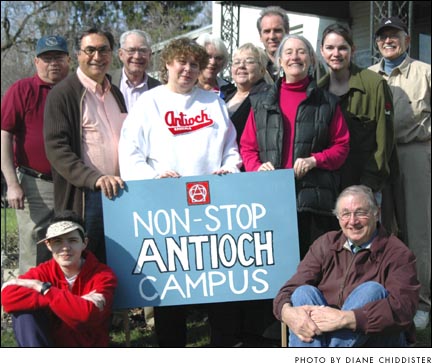 At their April 7 meeting, members of Yellow Springs Village Council unanimously agreed to write a letter to the Antioch University trustees urging them to engage in face to face negotiations with the Antioch College Continuation Corporation, or AC3, as soon as possible

“It’s important that Council makes clear that we support the AC3’s request for that meeting,” Council President Judith Hempfling said.

While negotiating teams from the trustees and the AC3 met for four months, the whole board of trustees never met with the AC3 in their attempt to transfer ownership of the college to them as an independent institution. Negotiations broke down two weeks ago.

Council took the action in response to a request from villagers Ken Huber and Migiwa Orimo, who represented Yellow Springs for Antioch College. The group presented Council with a petition signed by more than 1,000 people, with at least 650 from Yellow Springs, that urges the trustees to meet with the AC3.

The group only circulated the petition downtown and online for three days, Huber said.
“We were overwhelmed by the magnitude of the response,” he said.
Kathryn Van der Heiden stated that while she supports the face-to-face negotiations, she would not support Council siding with either Antioch College or Antioch University in its current difficulty.

Council declined to write a letter in support of Nonstop Antioch in response to a request made by Antioch College student Jeanne Kay. Council members said they did not have sufficient information on Nonstop Antioch to do so.

Other Council business will be covered in next week’s News.

Some folks just won’t take no for an answer. Take, for instance, the faculty, students and alumni of Antioch College who recently launched Nonstop Antioch.

“We have heard ‘no’ so many times, but it’s not in our vocabulary,” fourth-year student Cory Frohlich, operations manager for the college’s community government, said this week. “We’re resourceful. We’re creative. This shows our commitment to Antioch and to our beliefs.”

After almost a year of hearing ‘no’ from Antioch University in their attempts to keep Antioch College open, a core group of college faculty, students and alumni have transformed their despair over the probable loss of their college into new energy and hope. Specifically, they have launched Nonstop Antioch, in which they plan to continue the traditions, learning experience and customs of Antioch College, even without a campus.

Nonstop Antioch is no one’s first choice of how best to save Antioch College, those interviewed said. Organizers agree that the best solution would be an agreement between the trustees and the Antioch College Continuation Corporation so that the college can once again be an independent liberal arts college. But after talks broke down between the two parties two weeks ago, that outcome looks less likely, and the Nonstop Antioch plans moved ahead.

To Hassan Rahmanian, who has taught management at the college for many years, Nonstop Antioch is much more than a last resort. Rather, it offers an exciting opportunity to pare education down to its basics, the encounter between a teacher, students and learning, and to start anew.

“What excites me as an educator is that we’re reclaiming what belongs to me, to us,” he said. “We are experimenting with education and that experimenting always puts you in more conscious engagement with the subject matter.”

And faculty members find themselves, after a year of fighting for their college, newly energized by this effort, he said.

“What excites me about Antioch is that idealism is a source of energy for many of us,” he said.

To Ellen Borgersen, acting president of the Antioch College alumni College Revival Fund, the purpose of Nonstop Antioch is simple: to provide jobs for college faculty so that they don’t have to leave the college or the town.

“We need to keep the core of the faculty here, because they’re the heart of Antioch,” she said. “The university administration has been doing everything it can to make them give up and go away. If we let that happen, it will be the end of Antioch.”

Borgersen, an attorney and former associate professor at Stanford Law School, has spent much of the past six months in Yellow Springs, providing the human face of alumni support for the continuation of the college. She considers herself “the boots on the ground” for the alumni in their support of the effort to keep the college open, she said.

Nonstop Antioch moved from an idea to reality this week as its organizers moved into a physical space in a five-office suite on Xenia Avenue, a few blocks away from the college. From this office Borgersen will serve as a clearinghouse for the various components of Nonstop Antioch.

Also this week, Nonstop Antioch hired back five former employees of the college’s former Office of Institutional Advancement, who were locked out of their offices two weeks ago and told not to report back to work, after negotiations between the university and the AC3 broke down. Those employees — Risa Grimes, Aimee Maruyama, Wendy Ernst, Fred Kraus and Sherry Robbins — will work on alumni relations and fundraising for Nonstop Antioch.

The alumni board’s College Revival Fund voted at the end of February to contribute $1 million of the more than $18 million it has raised since last summer to the Nonstop Antioch effort. These funds will pay the salaries of the Institiutional Advancement staff and faculty, according to Borgersen.

Nonstop Antioch began in informal conversations between faculty and students soon after the university announced the closing of the college, according to third-year student Kim-Jenna Jurriaans, who will take several classes next year. The plans took on more urgency as negotiations between the university trustees and the AC3 came to a halt two weeks ago.

At a retreat in February, faculty and students took two days to envision Nonstop Antioch, according to faculty member Chris Hill. They analyzed their curriculum and chose courses to offer based on faculty members who plan to stay. So far, about 10 faculty form a core group of Nonstop Antioch organizers, and about 18 in all — out of a faculty of about 40 — have indicated interest, Hill said.

“I think we will have a quality faculty and a modest academic program, based on components of the college’s present program,” said longtime geology professor Peter Townsend.

For instance, according to Townsend, the complete three-member communications department of Bob Devine, Chris Hill and Anne Bohlen plan to teach at Nonstop Antioch, so that that program, long considered one of the college’s best, will continue.

There will be modifications, of course. Nonstop Antioch’s lack of technical facilities has prompted Hill to reimagine her media production course with students using cell phones to make films rather than cameras. While the lack of facilities is undeniably a challenge, it also promotes creativity, she believes.

But the challenges facing Nonstop Antioch are daunting, all agree. While a substantial number of faculty will take part, it’s not clear so far how many Antioch College students will sign on. A few have committed, and a recent survey indicated that 50 to 75 students expressed interest, according to Hill. But the Nonstop Antioch organizers are just beginning to explore providing accreditation to the effort, and without accreditation, fewer students will be able to stay.

Some faculty members believe that Nonstop Antioch will find a way to achieve accreditation, possibly through partnering with an already-accredited college that extends its own accreditation to the effort. Organizers are also exploring other ways of making Nonstop Antioch courses transferrable to other colleges, including students assembling portfolios or taking exams after courses to demonstrate their learning.

To help make Nonstop Antioch accessible even if the effort does not have accreditation and therefore can’t provide financial aid, organizers plan to reduce tuition dramatically, according to Hill, who said the group is considering tuition of about $1,500 per quarter, as opposed to current cost of about 10 times that amount.

One student who plans to sign on is Jurriaans, whose situation is complicated by her need, as a foreign student, to take courses from an accredited institution to keep her visa. But even if she has to take some courses from other schools, she plans to throw her support behind Nonstop Antioch, she said.

“I think this provides a continuation of community, a chance to pass on the wisdom and culture of the college,” she said. “Antioch is a unique place. Even if just a small group of people pass on the habits and values and intricacies of the community, that will be very important.”

The challenges of Nonstop Antioch, or Antioch-in-exile, as many students call the effort, and the intensity of creating the school hand in hand with faculty will add to students’ experience, Jurriaans believes.

“Antioch-in-exile could be a tremendous learning experience,” she said. “It is the sort of education that becomes a part of you. People know they are doing something amazing.”

Aware that student numbers for Nonstop Antioch may be small, organizers hope that villagers might take classes as well. In planning their courses, faculty members are looking for subjects and perspectives that would engage Yellow Springers as well as traditional students, several said, and they may also offer workshops for shorter learning experiences. For instance, Rahmanian is reconfiguring a class on world economics to cover local economics as well.

“We can modify our regular courses into something useful and engaging to the community,” he said.

Nonstop Antioch organizers also need local venues for their classes, including churches, coffee shops and other buildings. (Kurt Miyazaki has offered the Emporium for classes, Rahmanian said.) They also seek to house most students with local families, although they are also exploring finding a space for some students to live together as well.

All in all, Nonstop Antioch organizers hope that Yellow Springers engage in the effort in a variety of ways, and that such engagement would benefit both the town and the college.

“One of the silver linings in this mess has been a tightening of the bonds between the college and the town,” Borgersen said of the college’s struggles over the past year. “We look forward to an ongoing and strong relationship.”

Villagers who want to offer space in a home, a job in a business or have an interest in taking part in any area of Nonstop Antioch are encouraged to call Borgersen at 415-509-2725.

The effort is daunting and loads of work for all concerned, organizers agree. But they also agree that their effort will be worth it.

“The university cannot stop us from educating our students,” Rahmanian said. “We are taking our education back into our own hands.”