This Saturday, just park your car 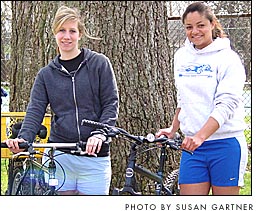 “There are so many cars!”

That’s the first thing Stephanie Broelingen and Julika Ruf noticed about Yellow Springs when they arrived last fall to begin their senior year at Yellow Springs High School. Ruf says they both noticed the difference right away — not only the number of cars but the size of the cars.

“I was all surprised,” said Broelingen in an interview last week. “I saw a parking lot with all these huge cars. Huge trucks. It’s amazing!”

They also noticed a distinct absence of public transportation.

“We noticed it because we can’t get anywhere,” said Ruf. “We don’t have our license. We have our bikes. We can come downtown but we can’t get to Fairborn. It’s hard to do anything out of town.”

Both girls are Stephanie Broelingen and Julika Ruf, exchange students from Germany. On Saturday, April 12, their project idea will turn into reality with one cooperative community event: Car-Free Day.

Broelingen is from Cologne and Ruf is from Augsburg. They met for the first time here, in study hall.

“I came in and asked Stephanie something about the computers,” Ruf said. “I said, ‘Yeah, I’m a stupid exchange student from Germany’ and she said, ‘Me, too!’ ”

In less than eight months, these two poised and insightful young women have picked up American high school vernacular, taken on extracurricular activities, including basketball and tennis, and toured San Francisco and Chicago. Last October, they learned they were required to do a senior project, so they decided to team up. On Saturday, April 12, their project idea will turn into reality with one cooperative community event: Car-Free Day.

When asked which one of them came up with the idea, the girls looked at each other and laughed. “Actually,” Ruf said sheepishly, “I had a dream about it.”

The young women burst out laughing as they recalled their project’s ambitious beginning. Their teachers were very supportive but felt the girls needed to pare down the idea to something more manageable.

The revised idea is to get Yellow Springs residents to think about how much they use their cars and rethink how to accomplish everyday tasks without them. Then on April 12, for one day, residents are being asked to leave their cars at home.

“Way too much,” added Broelingen. “In Germany, you can use your bike, go by subway, use buses. Even in little villages there will be buses. You never depend on a car. [In Yellow Springs] I live five minutes away from school if you ride your bike. All my neighbors drive their car to school. They all live so close to high school and they use their car!”

The girls plan to take pictures of the downtown streets before and during Car-Free Day to see if there is any difference.

“Then we’ll interview some people about what they think about the idea,” Ruf says.

In the course of their research, the girls discovered a place that already celebrates an annual Car-Free Day: Germany.

“You are not allowed to use the car that day or you would get a ticket,” says Broelingen.

In May, the girls will graduate with their class wearing the traditional cap and gown and receive a certificate stating they have successfully completed their courses. Once they return to Germany this summer, however, they must attend two more years of high school before they can officially graduate.

As for the original grand scheme, there still might be a way to make that happen. On Car-Free Day, the Yellow Springs High School Class of ’09 will host a talent show coffeehouse, 7–9 p.m., at the high school. Come out and support the students, support the environment, and support the dreams of two charming guests from Germany.

And leave your car at home.