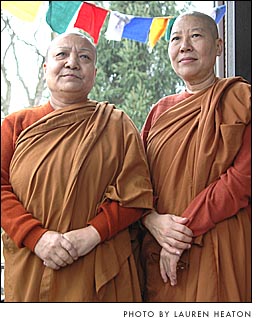 Buddhist sisters Dhamma Vijaya, left, and Dhamma Molini Rai will give a talk and film screening to raise awareness for their monastic school for Nepalese girls who are at risk of being sold into prostitution. The event will take place Sunday, April 5, at 3 p.m. at the Senior Center.

As a girl growing up in Nepal, Sister Dhamma Vijaya saw few opportunities. Most girls were not educated. She was expected to marry by 15, then leave her parents’ home for the home of her husband’s family, where she would have little power. Should her husband die, she would lose her status and support — in most ways, her life would end too.

But Dhamma Vijaya turned out to have a very different life than this. The turning point came when, as a young woman, she met a Buddhist nun.

“I was surprised,” she said in an interview last week. “She was a very, very strong woman.”

After the nun gave her books on Buddhism, Dhamma Vijaya began studying and meditating. It changed her life. Now, she is one of the few Buddhist nuns in her country, which is mainly Hindu, and one of the first to have received a Ph.D.

Things were bad for women in Nepal when Dhamma Vijaya grew up, and they’ve only gotten worse. Now, young girls are disappearing from Nepal, she said. They are being sold into prostitution, often taken to India, from which they return after they contract AIDs and come home to die.

Sister Dhamma Vijaya and her colleague, Sister Molini Rai, have made it their life’s work to help these young women. They started Dhamma Moli, a monastery school in Kathmandu for girls who are considered at risk, to give them the same opportunities that Dhamma Vijaya herself received, and an opportunity for an empowered life.

Toward that end, the Yellow Springs Dharma Center will this weekend sponsor an event to raise awareness for Dhamma Moli. At 3 p.m. Sunday, April 6, the nuns will give a talk at the Yellow Springs Senior Center on their project, and they will also show a documentary, “The Day My God Died,” on sex trafficking in Nepal.

The sisters are staying at the Dharma Center until May, having arrived in January. While in town, they lead meditation at the center, teach Buddhist studies at the University of Dayton and Wilmington College, and study English. The sisters began traveling to Yellow Springs to stay in the Dharma Center every two years after they met Robert Pryer, who leads a yearly Buddhist studies program in India for Antioch Education Abroad. Since 2002, the sisters have taught in the AEA program, they said.

Yellow Springs has been good to them, they said, and they appreciate the support they have received here for Dhamma Moli.

“We are always, day and night, sharing thoughts of loving kindness and praying for Yellow Springs,” Dhamma Vijaya said.

The two women became concerned about the sex trafficking problem in Nepal after about 5,000 young women returned to that country — the oldest was about 13 — after contracting AIDS in India. The girls, who came from poor families, had been sold to sex traffickers, who most often lied to family members and said they would find the girls jobs or husbands in the city.

With financial help from the Yellow Springs Dharma Center members and others, the sisters found an old building in Kathmandu and began turning it into their school. The construction is almost finished, and the school has its first four students, ages 8–9, who live at the monastery. The girls are housed, clothed and fed free of charge, according to the sisters.

“The girls are full of life, very smart and very happy,” Egart wrote.

Those who wish to support the new school may become a Friend of Dhamma Moli by providing financial support to help defray the cost of about $1,000 per year to feed and clothe each girl. To learn more about Dhamma Moli, visit http://www.dhammamoli.org.