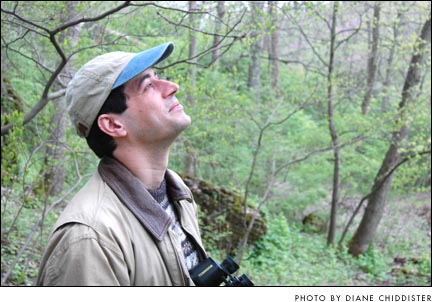 Glen Helen Director Nick Boutis will lead a dawn chorus walk this Saturday, May 10, as part of the daylong Make It Count for the Birds event. The event is the Glen’s biggest fundraiser.

One such time will be This Saturday, May 10, Glen Helen Director Nick Boutis leads a dawn chorus walk at 5:30 a.m. at the Covered Bridge parking lot. The event kicks off Make it Count for the Birds, a daylong event during which Glen enthusiasts will attempt to see or hear as many bird species as possible. The event is the Glen’s largest fundraiser.

The world may look a little dark at 5:30 a.m., but dawn chorus participants will be listening to the Glen’s feathered creatures rather than watching them. The experience reminds him of an orchestra tuning up, according to Boutis.

“First there’s the cardinals, then the robins, then the wood thrushes,” he said. “As the sun comes up, the cacophony builds.”

While fund-raising is the main goal of Make it Count for the Birds, organizers hope the day’s activities also heighten participants’ appreciation of Glen Helen, and remind them of the Glen’s vital role in the natural world. Specifically, according to Boutis, natural areas such as the Glen, which are declining in number, provide a critical resting and feeding spot for migrating birds.

“They’ve been doing this since the Ice Age and they count on stops along the way being available to them,” he said last week. “If any link in this chain gets disrupted, migrating birds have a tough time of it.”

Saturday’s events will also provide local birders — both newbies and experienced bird watchers are welcome —a chance to see birds they can see only rarely. While the Glen provides a home to about 35 bird species year round, that number swells to about 120 in May, as the Glen’s summer bird residents, winter residents, and year-round residents, along with those just passing through, converge in one place.

“In May you have the chance to see anything that’s here at any point in the year,” Boutis said.

In the event’s first year, last May, organizers hoped to spy about 50 bird species, and were delighted to find over 80. This year, Boutis hopes that Make it Count for the Birds participants get to see at least that many. They will have eight opportunities to do so, starting with the dawn chorus. At 8 a.m. a Glen Guide will lead a woodland bird walk through Glen forests, and at 9 a.m. those who prefer a more sedentary experience may join the morning big sit, an hour spent sitting around the circle at the top of Inman Terrace, taking stock of visiting birds.

At noon the event continues with a lunchtime tally rally, during which the birders will share what they have found. At 1 p.m. an afternoon big sit will take place at the Baldwin Pond Meadow, and at 2 p.m. a guide will lead a hike that begins at the covered bridge meadow to look for hawks, sparrows, sandpipers and others. Birds in the wetlands of the South Glen are the focus of a 3 p.m. walk, which begins at the Jacoby Road boat launch. And at 5 p.m. participants can meet at the Trailside Museum for the evening tally rally to share what they found and have free snacks and coffee.

The event brings in dollars because participants bring in pledges for each bird species seen; for instance, a pledge of $1 per species would yield $80 if 80 species were seen. Last year the event raised $11,000 for the Glen, and this year organizers hope to raise $15,000.

The monies raised will be used for land management and restoration, according to Boutis, who believes that such efforts as protecting the Glen’s wetlands and removing invasive species will help the Glen attract even more bird visitors in the future.

Boutis’ own interest in bird-watching began when he was growing up, but it “got a boost” when he worked as a naturalist at the Outdoor Education Center in the early 1990s, at the very beginning of his career. He came to his job at Glen Helen two years ago from Washington, D.C., bringing with him his passion for birds and newly-instituted monthly bird walks in the Glen, which he leads.

Boutis hopes that those who accompany him on Saturday’s dawn chorus share the experience that gets him out of bed early on May mornings.

“When you get up early and walk outside and feel a connection with the natural world, you feel really alive,” he said. “And you realize you could have slept through it and missed that experience of living.”

Topics: Glen Helen, fundraiser, Make It Count for the Birds