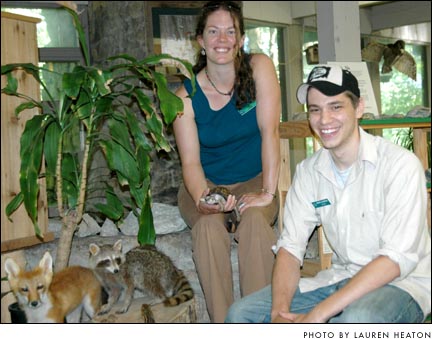 Trailside Museum staffers Anne Marie Long and Geno Luketic’s mission is to help visitors to know and love the Glen, as well as to protect the preserve and its vulnerable ecology. The museum’s summer hours are from 1 to 7 p.m. Monday–Thursday, 10 a.m.–8 p.m. on Friday, and 9 a.m.–8 p.m. Saturday–Sunday.

Glen reaches out for support

Fear of snakes is common, but visitors who have held gentle Pepper, the black rat snake who resides at Glen Helen’s Trailside Museum, know that most local snakes are harmless. Fans and frequent visitors to Trailside are also likely to know that the fur of a raccoon is much coarser than it looks, that a robin’s egg is blue but a towhee’s egg is speckled white, and petrified wood looks like wood but weighs like a ton of bricks. And thanks to two nature lovers who joined the Glen’s staff last month, Trailside will be open all through the summer to help more visitors discover, appreciate and respect the Glen and the natural world it represents.

The job of staffers Anne Marie Long and Geno Luketic is to help visitors to know and love the Glen. To that end, they are keeping Trailside open this summer 1–7 p.m., Monday through Thursday, 10 a.m.–8 p.m. on Friday, and 9 a.m.–8 p.m. on Saturday and Sunday. But their task isn’t always easy, and some of what they have to say is hard to hear. It didn’t go off well, for instance, when Luketic, who wears a baseball cap and chuckles easily, had to tell a gaggle of children splashing around in the blue hole last month, that there is no swimming in the Glen.

“A lot of them started crying,” Luketic said with horror. “I can’t do that again.”

And on Sunday when an industrious young hiker marched in with a shoebox and wire hanger, Long, a former Outdoor Education Center naturalist, felt badly about having to gently break the news that there is no species collection of any kind in the Glen.

In some ways Luketic and Long know they are working against their very mission to engender a love of nature. Come close, they’re saying, but not too close. Hike, but not off the trail. Investigate, but don’t disturb. Love, but don’t smother.

Of course the Glen’s policies exist to protect the preserve and the vulnerable ecology of the millions of plant and animal creatures that live there. And of course attracting visitors to the Glen is at the core of its educational mission. But serving those two purposes at once is a balancing act that at the Glen is challenged by a limited budget that just got smaller this year with the closing of Antioch College, the Glen’s owner. Antioch University officially owns the Glen now, but will not provide the administrative functions and small contribution to the budget that the college traditionally covered. And for that reason more than ever, it’s important that community members from the greater area not only love the Glen, but support it too, Luketic said.

The Glen currently receives support from about 1,000 people through membership in the Glen Helen Association or donation to the Glen Helen Ecology Institute. That level is less than 1 percent of the 100,000 visitors (a lowball estimate) the Glen attracts each year. In order to keep the trails in shape, maintain the facilities and pay for staff and programming, GHEI Executive Director Nick Boutis said, the Glen needs to build back its support.

So in addition to educating the public about the Glen, Luketic and Long are also inviting people to become members of Glen Helen. So far this summer, on average, one new member joins the Glen each day. Memberships start at $10 for students, and regular memberships cost $40. One hundred new memberships this summer is a great start toward building the support the Glen needs to be sustainable, Boutis said.

The value of the Glen is hard to quantify. Long grew up on a farm in Columbia, Mo., where her family raised beef cattle, corn and soybeans. Though it was a conventional, mechanized farm, her exposure to the forests, fields, deer and wild turkey oriented her life compass toward the preservation of the natural world, she said. She watched the deer and wild turkey, and noticed when the mourning dove population rose and the bald eagles began fishing in their pond again, she said. She hopes that helping others connect to the Glen will spawn for them the same love of nature and lifelong urge to respect and protect it.

Luketic got connected to the outdoors camping in the woods as a Boy Scout in Rootstown, Ohio. And his appreciation of the Glen grew after he moved to Yellow Springs last year to work as a potter. The accessibility of a peaceful refuge so close to downtown and the bustle of the working community makes the Glen very appealing, he said. The Glen attracts an outstanding diversity of people, including church goers in their Sunday best, serious runners, researchers, school groups, kids with sticks, anarchic teenagers, retired couples walking hand-in-hand, and the people with dogs! Visitors come not only from the immediate community but also from the Dayton and Springfield areas, and Cincinnati and Columbus too.

And there is a sense of ownership among all those visitors, who feel the Glen is their place, Long said. But conflict arises when visitors feel ownership but not responsibility for the preserve. When people swim in the Glen, it disturbs the ecology of the stream bed, which then kills back the plant and fish populations that live there, she said. When people litter or allow their dogs to trample and defecate in the Glen, it attracts flies and changes the environment from a natural refuge to a human-centered playground.

“A big part of our job is to nudge the culture back toward an ecological sanctuary — to evolve the language back toward sustainability,” Long said. “And we’re trying to remind people that this is a private park run by Antioch University, it does not receive public funds like John Bryan or the Clifton Gorge do.”

Long believes that nature should sometimes be allowed to exist for its own sake, so that the biodiversity of a region is able to flourish as it was meant to, undisturbed and untarnished. The goal is not just to allow the Glen to survive, but to thrive, she said.

According to Luketic, the purpose of the Glen is cyclic. If the naturalists can help visitors to know and love the Glen, and the Glen can help its supporters know and love other parts of the environment, then Glen Helen will be serving its mission to help preserve as much of the natural world that’s left, he said.