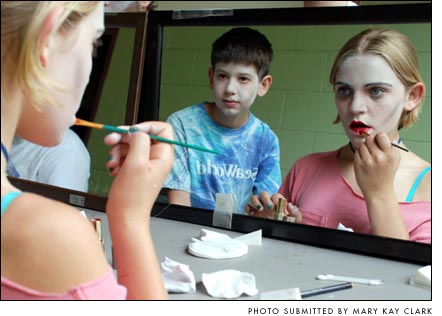 Grown up kids give back at YSKP

The room is filled with shouts and “ooofs!” and the sound of punches making contact. One young girl tries to strangle a boy twice her size while a boy who has just been kicked in the stomach, groans and rolls over onto his side. A girl two feet away aims a powerful punch at another boy’s jaw.

“Do a hair pull!” urges a male voice from the sidelines and the theater combatants collapse into a pile of giggles.

Down the hall, a dozen kids with ashen skin and sunken eyes practice with stage makeup. Around the corner an improv participant thinks out loud as she types the plot for an imaginary story on an imaginary computer while the rest of the group awaits her instruction as to what their character should do next.

Such breadth of activities in just one morning is the norm for YS Kids Playhouse and their 2008 Monster Mash Summer. From the auditions that took place on May 10 to the last performance of Bunnicula, The Vampire Bunny (July 23–27 in the Antioch Theater), YSKP is up to its bunny ears in a new educational direction — Acting Immersion Programs for Youth.

Taking a break from her responsibilities as managing director and costume designer, Lisa Hunt explained why the immersion program is so important.

“With the advent of ‘No Child Left Behind,’ many schools concerned about test scores for youth began cutting out programs that they felt were not academic specific,” said Hunt. “There became a real need to show what the arts really do for children.”

According to Hunt, there is currently a big push in arts education and arts policy to research and increase understanding and appreciation for the arts.

“The types of skills that are needed in the world we live in have to do with teamwork, critical thinking, discipline, problem-solving, and perseverance,” said Hunt, who believes these skills come from participation in the arts. As recipient of a grant from the Ohio Arts Council-Arts Partnership, YSKP agreed to expand its program to support this effort.

“By following the Ohio Department of Education’s Academic Standards for Fine Arts, we created guidelines for each of the classes,” said Mary Kay Clark, educational coordinator for the program. “For instance, when [YSKP founder and artistic director] John Fleming was teaching a dramaturgy class with the older kids from last month’s production of Frankenstein, his focus was to look at Mary Shelley’s original work, his [adapted] work, and any Frankenstein created in between and compare and contrast each one. Why did John write his show to be environmentally based? His class dealt with the historical, cultural, and social context of the play.”

Other immersion classes included body movement, vocalization, character development, stage combat, lighting and set design. When staff brainstormed about possible instructors, YSKP alumni were at the top of the list.

“YSKP has been around for 15 years, and in that time we’ve worked with maybe 500 kids — mostly from Yellow Springs,” said Hunt. “Of that group, probably 10 percent of them have gone into college [arts] programs or are now working professionally in theater.”

“They know how the program runs,” said Clark. “They just fit right in.”

Kevin Malarkey is a sophomore and acting major at University of Cincinnati College Conservatory of Music. Involved in YSKP from ages 8 to 16, he sees the growth that has happened in just the last few years.

“Kids are now doing research into their character, getting into their bodies and into their voices,” said Malarkey, who was stage manager for Frankenstein and facilitated the Tween Youth Workshops for ages 5 to 11. The respect he receives from the kids, he feels, is because of his past experience.

Malarkey’s brother, Daniel, who just graduated with his bachelors in French from Grinnell College, came back to teach movement and vocalization. Past participation in two YSKP productions was enough to influence his pursuit of filmmaking and screenwriting. Daniel’s theater studies for 10 months in Paris and his work in improv made him the perfect candidate to teach the first rule of improv: “Never Say No.”

“You take an idea someone has and build off of it instead of dismissing it or saying ‘No,’” said Daniel. “If we add on to other people’s ideas, we go a lot farther and life is much more fun!”

“YSKP started me out in theater,” said Kenyon College senior Charlie Cromer, who has been acting since kindergarten and spent this past spring studying theater in London — a break from his religious studies. Cromer facilitated a one-day combat basics training where he taught participants how to punch, choke, pull hair, and kick — without causing injury — then led the Tween Youth Workshops with long-time buddy Kevin Malarkey.

Ara G. Beal was in YSKP when it began in 1995. Her stage manager career started with YSKP’s Bonanza Valley! in 1998. Acting in the play was 8-year-old Allison Kelly. Beal continued on to be stage manager as well as stage technician for several years in California. Now 28, Beal is pursuing her Ph.D. at the University of Maryland in theater history and performance studies. Back home in Yellow Springs for the summer, she is director of Bunnicula while Kelly, 18, is stage manager and choreographer.

“YSKP has been going on for so long that they’ve already established a professional atmosphere,” said Beal. “Kids come to rehearsal on time, they come prepared to work. It’s been more teaching them how to work effectively than convincing them that they have to work.”

Kelly’s dance and theater resume includes a musical theater intensive program at University of Cincinnati College Conservatory of Music and a two-week internship last month in New York in which she found herself singing on the Tony Awards.

“It’s just a whole circle,” said Clark, in awe, as she recounted other circle-like examples. “You’re not just giving money to put on a production. There’s leadership as well, there’s giving back what you got.”

The best part of this bunny tale, however, is what participants had to say.

“I learned a bunch of new exercises I can do to keep my voice in good shape,” said Joshua Seitz, 11, who played Willem Frankenstein. “[The makeup immersion] class taught me how to make faces look different, how to make parts look sunken in. I figured out it works the same with drawings if you shade in parts.”

Ursula Kremer, 10 years old, who plays “Howie X” in Bunnicula, liked the “Typewriter” improv exercise and felt her confidence increase with each class. “I got less embarrassed when we did the warm-ups,” she said. Her sister, Greta, 8, who plays Bunnicula, liked the stretches at the beginning of class. “They helped me calm down and loosen my body so I could do different [physical] things with my character.”

“YSKP doesn’t treat you like a kid,” said Kelly, who will begin her first year at Wright State in musical theater in the fall. “It’s pretty amazing when you give kids the responsibility, how they will rise to the occasion.”