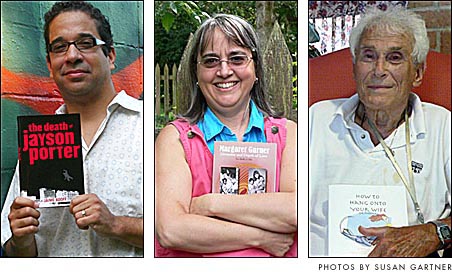 Three authors, three books, three very different journeys on the road to getting published. Chuck Colbert, Jaime Adoff, and Joanne Caputo talked about their recently published works and what they hope to bring to their readers.

How to express love

Certificates acknowledging some of Chuck Colbert’s finest lifetime achievements are proudly framed and displayed on a wall in his home. There’s the document issued from the state of Ohio honoring his certification as a professional engineer (1950), an award from the Institute of Electrical and Electronics Engineers (1992), and recognition as clinical associate professor emeritus of the Wright State University Boonshoft School of Medicine (2008).

The sense of humor of this scientist and researcher is also on display in the official-looking document that reads: “This is to certify that Charles Colbert has survived a week at Camp Run-A-Muk, Friends Care Community, National Nursing Home Week 2008.”

The achievement, however, that is most meaningful to Colbert is his marriage to Rita, his wife of 63-years-and-counting. As a tribute to her and the wisdom he has gained from that collaboration, Colbert self-published a breezy booklet titled, How to Hang onto Your Wife (or Partner)—10 Commandments, Unsolicited Advice from an Authority.

The 10 commandments will resonate with anyone in a long-term relationship, but he did have a specific audience in mind when he wrote the book: “Men who are about to plunge into matrimony, who don’t realize what they’re getting into,” said Colbert, 89, whose previously published works were limited to the scientific realm of radar and bio-engineering. “Marriages these days don’t last because there’s no communication,” he explained. “[The couple] takes each other for granted; they don’t express love.”

Although his wife and muse had watched the book’s progress over many years, she was still surprised by the final product, which arrived in early July.
“I was overwhelmed by his being able to express his love this way,” Rita said. “I don’t think when he got out of college as an engineer that he ever thought he was going to write a book like this. But it was always inside him.”
Colbert wishes the book had been available 63 years ago.

“I could have done a whole lot better as a husband,” he admitted, “if I could have read this book.”

A writer digs to his soul

Having grown up in Yellow Springs with parents who are celebrated children’s book authors, Jaime Adoff knew from an early age exactly what he wanted to be — a rock star.

“I never wanted to be a writer primarily because both my parents were,” laughed Adoff who, in April, celebrated the publication of his fourth book, The Death of Jayson Porter, published by Hyperion-Disney.

Adoff’s pursuit of being “an American idol long before the show was on” took him to Central State University where he studied drums and percussion and then to New York City in 1990. His band got close to several recording contracts, which never panned out.

When Adoff began to write poetry, he found it similar to song lyrics, which he had been writing since high school. His first book of poetry, The Song Shoots Out of My Mouth: A Celebration of Music, was published in 2002.

The irony of his familial background isn’t lost on Adoff. His niche is the burgeoning market of young adult fiction, where his poetic-prose style and edgy subject matter fit like destiny. “It’s one of those fate things when you’re doing what you’re supposed to be doing,” he said.

Just as his music led to a writing career, Adoff’s books have led to a public speaking career. “I travel around the country and speak to students about teen issues and all sorts of subjects that have been offshoots of my novels,” Adoff said. His book Names Will Never Hurt Me deals with bullying and school violence; Jimi and Me focuses on family secrets and a father’s murder; and The Death of Jayson Porter is about a 16-year-old boy who is contemplating suicide.

“The more I travel,” Adoff said, “the more I meet kids who are living in seemingly impossible situations where they think the only way out is to hurt themselves or somebody else.” His goal is to create characters and situations that kids can relate to and to foster empathy and understanding in his readers.

The son of renowned poet Arnold Adoff and the late Newberry Award-winning author Virginia Hamilton, Adoff, now 41, appreciates how not too far the apple fell from the tree, “even though the apple tried to roll very far down the road!” he joked.

“The best piece of advice my mom ever gave me,” Adoff recalled, “was ‘Jaime, you just have to dig deep.’ At the time I didn’t understand it, but it really is true because you can’t write a book like The Death of Jayson Porter without going past the most painful part of your soul and then going further.”

A narrative guided by spirits

In Joanne Caputo’s case, however, this was just a typical day in the writing and researching of her self-published nonfiction book, Margaret Garner: Diversity and Depth of Love. Two books in one, the first part is an historical account of the American slave woman’s murder of her own child in 1856 and subsequent federal trial in Cincinnati; the second part is a memoir of the author’s own eye-popping, jaw-dropping paranormal experience while researching the first part.

Skeptics who have trouble swallowing that kind of investigation for a nonfiction work are not alone. The author herself was in the same disbelieving mindset when the spirit of Margaret Garner first approached her.

“Especially because at the time I was doing authentic academic-style research and sharing it with Harvard senior research officer, Richard Newman, and then this process starts of me hearing from dead people,” said Caputo, who can laugh about the experience now, 10 years after the communications began.

Garner chose an interesting mortal to make contact with — Caputo had been an atheist for 20 years.

“It raised the issue — from where are they speaking, if there is no life after death?” asked the ex-school teacher and PBS award-winning documentary filmmaker, with her characteristic blend of humor, honesty and no-nonsense practicality.

Fortunately for Caputo, who began to question her sanity, Newman (at Harvard’s W.E.B. Du Bois Institute for African and African American Research) was completely on board and encouraged her to “stay with it.” She also had the love and support of family and friends, especially her husband, Michael Fleishman, and, most importantly, she lived in a unique locale.

“Thank God I lived in Yellow Springs, where we’re a center for alternative healers and clairvoyant mediums,” Caputo said. She ended up working with Terri Coleman, local medium and former owner of Angelic Devas. Facing skeptics and ridicule, Caputo pushed on, fully aware that if the spirits could contact her, they could contact anyone.

“Nothing could be happening just to me,” she said. “We’re all humans here. I thought the book would be of comfort if something similar is happening for someone else because I felt very alone during much of this process.”

The experience not only changed the direction of the book but the direction of Caputo’s spirituality, which did a complete about-face. “I know very few people who feel as connected to the Creator as I do now!” she laughed. “I just feel totally guided and supported.”

At one point, Caputo was in contact with 10 individual spirits. Does the filmmaker/author see a new career in her future? “My plate is so full with film projects and this book,” explained Caputo, “it doesn’t feel right at this time. I made a conscious decision to close the door on the spirit communication and immerse myself in this physical earth plane. I’m a very busy mortal person!”

Caputo’s book is available at NOLAA Gallery and Epic Book Shop. There will be a book reading at Epic Book Shop on Saturday, Aug. 16, at 6 p.m.