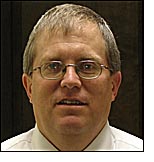 After meeting in executive session on Monday, Oct. 27, Village Council members unanimously agreed to offer Mark Cundiff, current planning director for the city of Troy, the position of Yellow Springs Village manager. Though the contract is still under negotiation, Cundiff plans to start his new job on Nov. 17.

“I’m very excited — I think the village is a good fit for me, and in terms of my career, it’s a logical move to make,” he said on Tuesday.

Cundiff, 48, finishes his job in Troy on Nov. 14 and will have almost two weeks of overlap with Interim Village Manager John Weithofer before Weithofer leaves on Dec. 1 to take a position with the Miami Valley Communications Council, Village Council President Judith Hempfling said. Because of Cundiff’s extensive administrative and managerial experience, Hempfling felt that the overlap would be sufficient to get him acquainted with the Village.

Council chose Cundiff over two other finalists, Nancy Benroth, assistant village administrator of Bluffton, and Randy Bukas, village manager of Germantown, partly because of his extensive experience in both planning and managing municipalities, Hempfling said. Cundiff has served as Troy’s planning director for seven years, prior to which he was the city manager of Greenville, Ill., a town of 6,400. He has also served as the assistant city manager of Sidney, Ohio, and as a planner for Woolpert Associates. He has a masters in applied behavioral science with a concentration in community development and planning from Wright State University.

According to Hempfling, Cundiff also has strong interpersonal skills and has the ability to work well with the public, qualities that were corroborated by many positive evaluations from Cundiff’s previous colleagues and employers in Troy and in Illinois.

“It’s clear he’s a big-picture thinker with strength in strategic planning, and he is also dependable, which is something the village needs for long-term stability,” Hempfling said. “Council feels very confident he’s had the depth of administrative experience necessary and that he’ll be a very capable manager.”

Through the manager selection process, Council has gained a better understanding of the responsibilities of the Village manager and will rely on Cundiff’s ability to work with public committees in order not to overburden Village staff, Hempfling said. Cundiff is open, and he listens well, likes people and has a good sense of humor, according to Hempfling, all of which are the “less measurable” qualities that make him a good fit for Yellow Springs and allow him to “identify with what we’re about here,” she said.

The village’s charm was a big draw for Cundiff, who grew up in the greater Dayton area and would not have left his current residence in Troy had Yellow Springs not been “equally nice or nicer” than Troy. Cundiff applied for the manager position three years ago but was not interviewed, and when the opportunity came around again, he decided to try again because he “knew Yellow Springs was a good fit for me.” He finds the village unique, attractive “a neat place to live,” he said, and a place that has concrete ideas about self improvement.

“The biggest thing that attracted me is the vision that the community has; it knows what it wants to be and what it doesn’t want to be,” he said. “The village has taken positive steps to preserve the things that make Yellow Springs, Yellow Springs; having that vision is very important.”

Cundiff plans to move to Yellow Springs with his wife, Peggy, and his 16-year old daughter, Kelsey, who will attend Yellow Springs High School. The Cundiffs’ son, Patrick, is a graduate student at Pennsylvania State University.