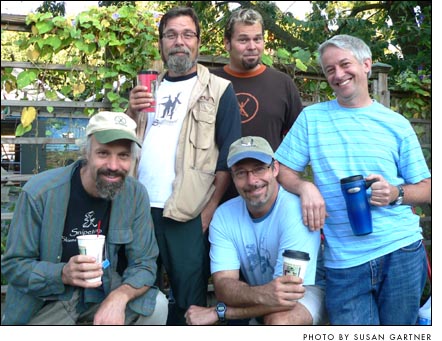 Ohio Renaissance Festival performers (clockwise from left) Jonathan Crocker, David Woolley, David Epley, Rob Williams, and Douglas Mumaw (kneeling) traditionally meet at Dino’s Cappuccinos on Saturday morning before heading out to Harveysburg for a weekend of juggling, sword-fighting, and general mucking about. The festival runs Saturdays and Sundays through Oct. 19, 10:30 a.m. to 6 p.m., rain or shine.

Tales of working the knight shift

Hail Yellow Springs innkeepers! A trio of hearty men are greatly in need of commodious lodging. Be not afraid, these are good gentles all and shall not fill thine abode with odors great or small. In sooth, they are men of some station, and are journeying to this shire to make merry at the Ohio Renaissance Faire. Your gold, ale, and daughters are all safe. What say ye? Post ye a bill in the town square.

The Yellow Springs News classified ad that recently appeared wasn’t worded exactly this way, but it might well have been, had the writer chosen to stay in character and in the 16th century.

David Woolley, Douglas Mumaw, and Rob Williams are guests of our humble shire for seven weeks while they perform at the Ohio Renaissance Festival, which began Labor Day weekend and extends through Oct. 19. The festival is located in Harveysburg, Ohio, and runs Saturdays and Sundays, 10:30 a.m. to 6 p.m., rain or shine. For more information call (513) 897-7000 or go to http://www.renfestival.com.

Woolley and Mumaw met in Chicago in 1988 when both were working as actors and developing their expertise in the specialized area of stage combat — “the illusion of violence.”

“We’ve been touring together now for 19 years,” said Woolley, who teaches swordplay and unarmed combat for theater and film at Columbia College in Chicago. This will be the duo’s 14th season at the Ohio festival, performing their mainstage act, “The Swordsmen,” featuring Guido Crescendo (Woolley) and Dirk Perfect (Mumaw).

When answering questions from curious peasants and wench-wannabes intrigued by the life of a faire circuit actor, both Woolley and Mumaw stressed the importance of their college education as a necessary foundation.

“Most of the people [working the circuit] have college educations and have chosen to go off the beaten path to make their living,” said Woolley. “If you want to be a performer, you need to be trained as an actor. Most of the people you see on the stage — jugglers, magicians, sword-swallowers, comedians, singers, dancers — they’ve written and created their own shows.”

“There’s a lot more to acting than just memorizing lines,” said Mumaw, who studied theater and communications in college and has choreographed stage combat for a variety of theater productions. Keeping their audience engaged, improvising scenes with shy audience members, listening for where the laughs are (and especially where they aren’t) — such skills and more are necessary to keep audiences and faire management equally appreciative.

“We are living examples of the finest qualities that can be found in a Renaissance man,” orated Woolley, tongue firmly in cheek, in his finest Shakespearean dialect. “We teach the men in our audience to be bold! and stupid! and impress women by buying them expensive things!”

They also teach the men how to settle their differences through sword-fighting. Mumaw likens the act to vaudeville — “a two-man show that has clever patter and keeps people laughing” — while wowing the crowd with their expert swordplay.

When the duo realized that the life of a traveling swordfighter-actor-comedian can be hard on the knees and shoulders — not to mention their long-term relationships -— they cut down their 40 weeks of travel each year to a more reasonable 17. The last nine years have been spent maintaining faire obligations in Wisconsin and Ohio and performing at universities and arts centers.

The third “good gentle” in the ad is Rob Williams, whose main residence is Burbank, Calif. From 1984 to 2004, Williams was part of a three-man comedy act called “The Flaming Idiots” that traveled all over the world (“from street performing all the way to Broadway”) and included a stop on “The Tonight Show.”

Since retiring the show, Williams has worked as a comedian and television writer, but he continues to perform at the Ohio faire.

“One of the really fun things about a Renaissance festival,” said Williams, “is it encourages the audience to play along. I just love it. It’s a really unique environment that appeals to both children and adults.”

Williams now performs a solo version of his previous act that incorporates juggling, whip-cracking and a routine that has brought him Guinness Book of World Records notoriety.

“I make a baloney sandwich with my feet,” said Williams. He prepares the sandwich, cuts it in half and serves it to a woman in the audience who then eats it.

Thinking on his feet — then using those feet to prepare lunch — has provided Williams with a rewarding career. “I think any actor who’s ever going to work live theater — whether it’s Shakespeare in the Park or David Mamet’s latest play on Broadway — would be a better actor if they had to do a Renaissance festival at some point,” he said.

The original idea for a Renaissance faire was started in 1963 by a Los Angeles schoolteacher, Phyllis Patterson, who decided to teach history by having her students reenact the various roles of people living during the Renaissance. Through her research, Patterson uncovered a scenario — historically accurate — that would get the broadest spectrum of people together in one place. During the summers when living conditions were particularly pestilent, Renaissance royalty would flee the cities to visit their subjects in the country, inspiring celebrations and market faires.

“So this teacher thought, ‘This is perfect. I’ve got everybody from kings to beggars to jugglers to jesters,’” explained Jonathan Crocker, “and she came on this concept which turned into Renaissance festivals.”

Raised in Yellow Springs until he was 8, Crocker (aka “Jake the Wildman” of Theater in the Ground fame) has been making his living on the faire circuit since 1982 when he was a cast member in the Renaissance Festival in Sterling, New York. After doing four festivals in four states every year for 12 years, Crocker married and moved to Norway, but he continues to work the faires in Arizona and Ohio. Each fall, Crocker returns to catch up with Yellow Springs friends and his faire family — Woolley, Mumaw, Williams, and villager David Epley.

“There are well over 100 Renaissance festivals in the country that run the spectrum from these big established theme parks to small weekend events,” explained Crocker, who appreciates the unique acting venue that combines his passion for history and theater. At each festival there is a cast of local semiprofessional/community theater actors. Then there are the professional actors like Woolley, Mumaw, Williams, Crocker, and Epley who have made a living performing at festivals around the country.

With audience members ranging from babies in strollers to 85-year-old grandmothers, the festival crowd is a challenging one, said Mumaw, who lives with his wife in an old farmhouse in North Carolina when he’s not on the road.

“If Grandma is not happy with what’s happening on the stage,” he said, “she’s moving on and the entire family is following her.”

In a comparable indoor venue, patrons pay $40 a ticket for a comfortable seat in a climate-controlled building and can easily focus on the performance. At an outdoor festival, inclement weather is only one of many distractions. “People pay $18 and there are nine stages,” said Mumaw. “There’s food, there’s crafters hawking their wares, and it’s our job to have 700 people in wooden benches keep their eyes on us for 30 minutes.”

All five men know what it means to be a struggling actor. All five men talked about their finely developed skills of experimentation, failing miserably, and experimenting again. And all five know the elation that comes from having an audience eating out of your hand — or your foot, as the case may be.

“It’s like a big playground,” said Williams. “It’s a very literate, very smart audience. They get all your references. It’s not a button-down experience where people are prim and proper and playing by the normal rules of society. It’s a loose, anything-goes playfulness.”

“We’ve learned a lot over the 20 years of making our living,” said Epley, referring to “Theatre in the Ground,” the mudslinging mainstage act he performs with Crocker and Florida resident Patrick Johnson (“45 minutes of 12-year-old boy humor”). “We’ve walked on stage and had 2,000 people just scream,” he said. “We’ve played with timing. We’ve spent a whole season playing with how one actor’s reaction improves or hurts the other actor’s laugh [from the audience].”

For all five men, one of the joys of being on the faire circuit has been the friendships they have formed with each other and the faire community at large. The men traditionally meet at Dino’s Cappuccinos each Saturday morning before heading out to Harveysburg for a weekend of juggling, sword-fighting, and mucking about.

“We’ve interrupted each other’s shows just to mess around and we’ve thrown special shows together to raise money for various causes,” said Epley of the entourage. “It’s a joy to be on stage with any or all of these guys. It’s one of the most amazing things to know you can hand the ball off to anybody on stage and they will run with it. Nobody is going to be pushy or go too fast or run over anybody else. Everyone is generous and able to share the space, knowing the audience will walk away having had a blast.”