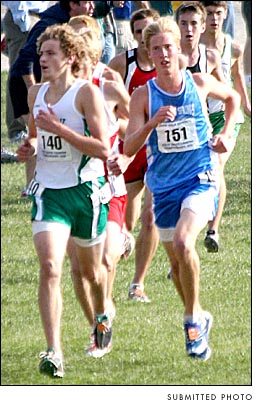 Jake GunderKline, right, was in the thick of the chase at Scioto Downs race track in Columbus during Saturday’s cross country state championship meet. Gundi placed 30th overall in a personal record of 16:30.

The GunderKline twins had a morning to remember at the Div. III state cross country championships in Columbus on Saturday, Nov. 1. Held at Scioto Downs race tack, the climatic meet of the harrier season attracted a huge crowd of 10,000 spectators to cheer on 151 runners, including Yellow Springs High School seniors Jacob and Brock GunderKline. Both drew low numbers that swept them to the outside at the starting line. But unlike at Regionals, the Bulldog runners got out so quick that both were in the top 50 at the 800 mark (2:30 for Jake and 2:32 for Brock).

Settled into the race at that fast clip, the Gundies each held his own. At the mile, Jake was in about 44th place with a 5:04 mile, with Brock trailing by seconds at 5:08 in approximately 54th place. Cuing off Coach Vince Peters, they both took advantage of the course’s downhill slopes. When they re-entered the stadium in front of a boisterous crowd, Jake had moved up to 37th, passing the two-mile mark at 10:29 (5:25 for his second mile), and was on his way to a lifetime best and a top 40 finish — if he could hold on. Brock clocked 10:40 at two miles as the duo exited the stadium for the exterior loop on the north side of the stadium.

It seemed like a long time before the leaders returned to the huge stadium for the final half loop inside the track. Two runners from the Troy regional led, but a fast closing chase group brought the crowd to a deafening roar. Soon Jake re-entered the stadium. He had moved up to 35th position over the final hill and looked ready to press for home. And with about 200 meters remaining, he laid down one of those overwhelming kicks he is known for and passed five runners in the last stretch of his race. He placed 30th in 16:30 — a lifetime best by five seconds. Jake’s time made him the seventh fastest runner from the southwest Ohio region, improving four spots and averaging 5:18 per mile.

Brock developed a cramp over the last mile and was not able to make the hard charge over the final mile. He placed 64th overall in a respectable 17:05 for the 3.1-mile course.

After the meet, the entire Yellow Springs team went out for a celebratory lunch before the twins left for a visit to Goshen College in Indiana, where recruiters are looking at them as future collegiate scholarship runners.