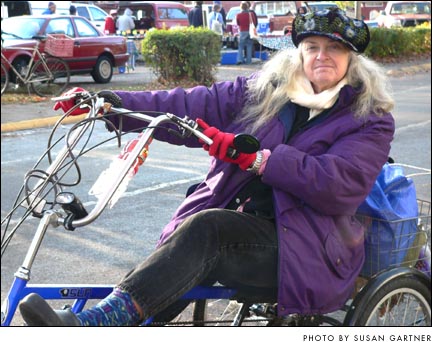 Longtime Yellow Springs resident Marilyn Van Eaton, after a long bout of illness, uses this recumbent bicycle to wheel around town and to regain her health. The bike was purchased after friends raised $1,000 from villagers so that Van Eaton could have a bike.

“This will be a love letter to the village,” said Marilyn Van Eaton, her eyes filled with tears. The recent interview had to be stopped several times while she composed herself, describing the “long row to hoe” that has defined her life for so many years.

Since the diagnosis of stage four cervical cancer in 1983, Van Eaton has undergone numerous surgeries only to face additional complications including phlebitis, thrombosis and lymphedema. The pain in her lower body has been so debilitating that the normally vital and energetic woman could barely tolerate standing or walking.

Then, in 2003, Van Eaton had a chance encounter with Evadene Holyoke that would set the stage for a life-changing event. Holyoke was riding a brand new recumbent tricycle and offered her friend a test drive on the spot.

“I was amazed at the turning radius and how comfortable it was,” said Van Eaton.

A few months later, due to Holyoke’s waning health, the trike was put on short-term loan to interested persons. Van Eaton immediately signed on.

“It was August and one of those Art Strolls was going on downtown,” she said. “I had been missing them because it was so uncomfortable to walk that far. But instead of it being hot and humid and painful to walk, I’m cruising down Davis Street, the wind in my hair! I get downtown and walk around and before it got too dark I made it back home.”

Van Eaton was ecstatic about her new freedom.

“It changed my life. It was like getting my legs back!” She used the bike almost every day for those precious few weeks. So when the time came to return the bike for someone else to use, Van Eaton sunk into a horrible depression. “I crashed and burned,” she said through tears.

Being on Social Security disability, Van Eaton’s options were limited. She asked friends Diane Petzold and Eric Siemer if they would shop around online and find a second-hand recumbent trike for her to purchase.

“For two years they looked,” said Van Eaton, “but [the trikes] were so new they never came up second-hand.” Van Eaton’s diminishing mobility continued to be a problem. “I was having to depend on people, calling them for rides,” she recalled. “I just did not like having to do that. I was housebound to a large extent.”

Then, in April 2007, Van Eaton discovered she needed another abdominal reconstructive surgery.

“When she went in for the surgery, I was really concerned about what her condition was going to be post-surgery,” said Petzold. “I was hoping she would recover and get her strength and her health back, but I worried about her spiritual and mental well-being. I told Eric to find the right machine and I’d find the money.”

Petzold thought about what the tricycle would mean to her friend.

“It’s not just about her having this nice trike,” she said. “It’s about her having her life back. I talked to her surgeon post-surgery and he said it’d be so wonderful for her health and for her heart — for everything. I just knew I had to get that trike.”

Petzold had done a fair amount of fundraising for various organizations, but never anything this personal. She stopped in at Dino’s Cappuccinos for a cup of coffee and a pot of courage.

“My thought was to start outside of Dino’s and go up and down each side of Xenia Avenue, asking if people knew Marilyn and when people said ‘Yes,’ I would say, ‘Here’s the situation.’ ”

The first person she ran into was a former Antioch College professor of hers who didn’t know Van Eaton but still wanted to hear the story. “I explained about Marilyn and that I’m going to buy her this bike and I’m going to need around $1,000. I suggested a $5 donation but it could be any amount. I figured only people who knew her would want to give money.” The man immediately went to his ATM machine and donated $20.

“I got as far as The Emporium,” Petzold laughed. “I couldn’t get any further than that because everybody I asked gave me money and then they went home and told their friends and people were coming down the street finding me and giving me money.” One woman hurriedly approached Petzold and handed her an envelope before dashing off. One teen “gave me everything he had in his pocket.”

A blank journal was provided for contributors to express their good wishes. Like a scene from It’s a Wonderful Life when George Bailey is shown all the many ways in which he touched the lives of the residents of Bedford Falls, the stories started to come in of the many ways in which Van Eaton has touched so many lives in Yellow Springs.

“This one guy said to me, ‘Do you know Marilyn was holding my hand when my first child was born?’” recalled Petzold. “I got contributions from total strangers to people who had a deep connection to Marilyn. I was hearing all these beautiful stories. ‘Do you know she did this for my friend?’ It was amazing to me the variety of people who didn’t even hesitate. Halfway through the story they were pulling out their wallet.”

When Petzold went home that night and counted up the money, she had almost enough to buy the bike.

“I was floored,” she said. “I thought I’d be doing it for weeks. I opened up the envelope that woman gave me and there was almost a $100 in there.”

After one-and-a-half days of fundraising, the tricycle was ordered through Village Cyclery. For weeks, Petzold had to turn away a continuing stream of contributions.

In August 2007, with the bike assembled and ready, the three masterminds behind the mission —- Petzold, Siemer, and Jackie Mulhall -— paid a visit to their completely unsuspecting friend. “We’re all hanging on each other, tearing up,” said Petzold, “and Marilyn is asking us, ‘What is wrong with you guys!?’”

Barely able to contain themselves, they handed her the journal of good wishes and watched Van Eaton slowly leaf through the book.

“All of a sudden it dawned on me,” laughed-cried Van Eaton. “I swear I almost threw myself into a relapse. ‘A tricycle!’ I screamed. ‘You got me a tricycle!!’”

“The beauty of it,” says Petzold, 18 months later and still in awe of the village’s response, “is that she’s gone on to get very strong, her body is doing very well. She’s able to do all these things and she’s having fun.”

It isn’t difficult for the villagers of “Bedford Springs” to see the return on their investment. Van Eaton is a familiar sight in town, pedaling to garage sales or the Farmer’s Market, radiating gratitude for her independence and mobility. The trike itself seems to gleam with pride at its usefulness and purpose.

“People just wave and smile,” she laughed. “Even motorcyclists give me a ‘Hi’ sign!”

In the front of the journal is an entry from local poet Harold Wright, titled “Trike Triku” which reads:

cosmic cycling
round these curves we soar
dancing in joy