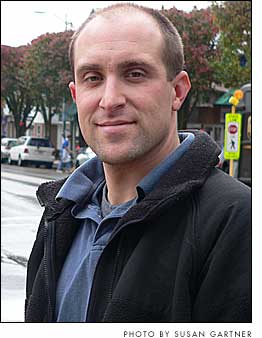 Writer and Air Force reservist Todd ‘TJ’ Turner’s essay about his 2006 deployment to Afghanistan was selected to be read on NPR’s ‘This I Believe’ segment Nov. 9 in honor of Veteran’s Day.

National Public Radio’s popular media project, “This I Believe,” has inspired thousands of writers across the country (including 10 from Yellow Springs) to express and condense their thoughts into a personal essay, 500 words or less, then submit it for consideration to NPR’s selection committee. Selected essays are posted on the Web site, http://www.thisibelieve.org, with a subset of essays chosen to be read — by the author — and aired on “All Things Considered” and “Weekend Edition.”

The essay that aired Nov. 9 as a tribute to Veteran’s Day began:

“I believe in the power of teddy bears.”

Yellow Springs resident Todd “TJ” Turner is the author of the essay. A teddy-bear of a man himself, Turner currently works as a civilian research scientist at Wright-Patterson Air Force Base. His essay was inspired by an incident that happened during his four-month deployment in 2006 to Bagram Airfield in northern Afghanistan.

“The area around Bagram is filled with extremes,” the essay reads. “It is both ruggedly beautiful, and desperately poor. It is peaceful and serene, but punctuated with unbelievable violence… . It is an area where landmines coexist with children playing in the fields.”

The path that took Turner to Bagram is unique among military personnel, he said in a recent interview. He doesn’t come from a military background and all of his undergrad and graduate aspirations had already been achieved by the time he signed up. So what was his motivation?

“I wanted to be an astronaut,” Turner replied, “and it’s much easier to get into the space program if you’re already in the military.”

So at age 28, armed with a Ph.D. in mechanical engineering, he joined up. He spent three years on active duty stationed at Wright-Patterson Air Force Base before volunteering for an assignment in Afghanistan. He described his executive officer role overseas as “long periods of boredom punctuated by brief moments of true terror.” Turner decided to write during the downtime to keep his mind occupied.

“They didn’t happen too often,” he said of the periodic rocket attacks that would interrupt his routine workday. “Most of the time there’s nothing going on and then all of a sudden a rocket would land. We’d hit the bunkers and wait for the ‘all clear.’ ”

For his “This I Believe” essay, Turner tried to capture the insights he gained during his four-month tour of duty.

“One day, we were driving back home through the Panjshir Valley. As we went along, I saw the destruction left from the seven-year conflict with the Soviets. I saw the damaged houses and damaged bodies of the people and, written on their faces, I saw their despair… . It occurred to me that this is what hell is like — not a place that’s destroyed, but when hope is destroyed. I saw this in the faces we passed. Except for the kids. The kids still played and their faces were alive, not infected with despair.”

Turner’s position with the Air Force’s 455th Expeditionary Mission Support Group allowed him to leave the base and interact with villagers as a way to foster goodwill between the two populations.

“I got to hand out school supplies, backpacks, teddy bears and candy,” he said. He saw how the villagers gradually began to trust the soldiers and report any suspicious-looking persons or activities, which the soldiers would then check out. At the end of the day, said Turner, the villagers were better off and the base was more secure.

For the first month he was there, Turner used his downtime to work on a satirical spy novel he had started years earlier. After he finished the novel, he started an e-mail journal.

“I’d send home weekly updates and they took on a life of their own,” he said. He first started writing to an e-mail list of about 20 friends. As more people asked to be included, the list swelled to 450. His e-mails included stories from his daily life.

“On our way out of the valley we passed an old man and what I guessed to be his grandson. He heard the vehicles coming and pulled the child in close,” Turner wrote. “His expression seemed hostile, but maybe it was just the snow and the cold. As we slowed down to pass, I held a bright blue teddy bear out the window…. [The little boy] grabbed it right away and hugged it with both arms.”

Turner recounted the frustration he and other military personnel feel about what they perceive as the media’s one-dimensional representation of the efforts in Afghanistan.

“There’s this filter of sensationalism,” he said. “It was almost like they didn’t want to report on anything unless it was an explosion or troops getting killed. We were trying to get journalists to [cover] what the provincial reconstruction teams were doing — new roads, new buildings, schools, wells, [providing] electricity. But nobody wanted to report on that. They just wanted to know ‘Are you going on a combat mission?’ A school opened nearby and we couldn’t get any of the reporters to go there.” Turner emphasized that the dire news is equally important and is not suggesting that the reports are inaccurate — just limited in scope.

“You’re not seeing the larger picture,” he said.

To Turner, a piece of the larger picture could be seen with that small human interaction when he held out the teddy bear.

“The old man looked right at me, ‘Tashakkur,’ thank you, he said. I watched until they disappeared around a bend behind us, the child still hugging his bear. I can still see the look on the old man’s face. Maybe it was just a smile, but it looked more like hope — hope that his grandson wouldn’t live in the same world he did.”

When Turner was deployed in January 2006, he left behind his wife, Nancy, their nine-month-old daughter, Cheyan, and a new puppy. “Nancy was in her second round of grad school at [Ohio State University] when I left,” Turner said. “It was a stressful four months.”

Turner and his wife now have a second child, 15-month-old, Jia. They would like to organize an Ohio chapter of Emergency, a nongovernmental organization (NGO) that provides free, high-quality medical care for civilian war victims.

Since his deployment, Turner has attended the Antioch Writer’s Workshop and completed a second novel, a war satire, which is currently looking for an agent and a publisher. He looks forward to a second deployment back to Afghanistan as a reservist within the next 18 months, when he will be allowed even more meaningful interactions with the locals.

“I want to see what has changed,” he said optimistically. “That’s what I look forward to.”

At best, Turner believes, the role of the military in Afghanistan is to help make changes that foster hope, and doing so one step at a time might create a better world.

“Hell is what causes terrorism. It’s about pure desperation, and feeling like there’s no way of recovering the hope of childhood,” Turner wrote. “I’m not saying that we’ll be able to win this conflict with teddy bears alone, but when I deploy next, I’m packing a bag full of the little furry creatures just in case.”

To read or hear Turner’s full essay, go to http://www.thisibelieve.org, click on Advanced Essay Search, and type in author’s name and town. For more information about Emergency (NGO), go to http://www.emergencyusa.org.