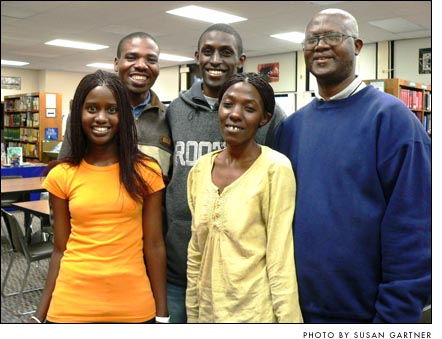 Rwandans open up world for YS

It was an ordinary night in the village. Traven was showing Tony — both Yellow Springs High School students — how to make Rice Crispy treats. Another student, Kelly, was doing homework alongside her brothers and sisters. Science teachers Fidele and Al were attending a Village Council meeting while a colleague, Eugenia, played ping pong with her housemate, Donna.

At first glance, it’d be hard to guess that Tony Gasana, Kelly Ngamije, Fidele Havugimana, and Eugenia Uwamariya are 7,580 miles from home. They arrived in Yellow Springs on Nov. 7 after a 22-hour trip from Rwanda by way of Ethiopia, Rome, and Washington, D.C. Now halfway through their stay, each one has comfortably settled into a new routine with their respective host and host family.

“I feel at home,” said Uwamariya, describing the easy-going compatibility she has found with her “Mum,” Donna Cottrell.

How did these sympatico pairings come to pass and why would a group of Rwandans want to visit Ohio in the winter?

For the past two years, retired Central State University chemistry professor Al Schlueter has traveled to Rwanda to teach English and chemistry for six weeks at a time at Ecole des Sciences, a boarding school in Byimana.

“On my first visit I was very impressed with the progress of Rwanda since the 1994 genocide,” said Schlueter in a recent interview, “and touched by the motivation of the students, teachers, and brothers.”

The secondary school (grades 7–12) is run by the Central-East African Province of the Marist Brothers, a Catholic religious order. The 820 students live in dormitories during the 10-month school year. Eighty percent of graduates receive full scholarship to the University of Rwanda or to the four state-run colleges in the country. The remaining graduates attend private colleges.

“They were very generous,” said Schlueter of his Rwandan hosts. “I thought this year it would be fun to bring them here and have them see my village. The village of Byimana is kind of like Yellow Springs — a small rural setting.”

“Rwanda is a country which is completely changing from a French background to an English background,” said the school’s headmaster, Brother Straton Malisaba, who accompanied the group and stayed with Schlueter for two weeks before flying on to Boston. Although Kinyarwanda (the indigenous language), French, and English are currently spoken at the school, starting in January, English will be the official language of the school and of Rwanda.

Earlier this year, Schlueter secured funding from the Morgan Family Foundation to allow two teachers and two students to travel to the U.S. during their “summer break” and spend six weeks in Yellow Springs, learning and teaching at YSHS. He then put out the word for host families. In the meantime, Malisaba, who has visited Yellow Springs twice before, began the selection process to determine who would be making the coveted trip.

“These people will be the testimony for the others,” said Malisaba. “They will tell about their experience here and whether the fears they have of [an English-speaking school] are realized or not.”

Kelly Ngamije, 17, was selected because of her outgoing personality and extracurricular involvement. Whether it’s doing chores with surrogate siblings Rachele, Theron, Hayden, Evalynn, and Anders (a Norwegian exchange student) or practicing English with surrogate parents Naomi and Jim, Ngamije (who has four siblings of her own, including a twin) fits right in at the Ewald-Orme home. Since her arrival, she’s been singing with the St. Paul Catholic Church choir and taking a zumba dance class at the Xenia YMCA.

The two teachers were chosen because of their teaching methods and commitment to the school. Biology and chemistry teacher Fidele Havugimana, who is staying with Schlueter, is not only impressed by the material wealth of YSHS (“they have more equipment than the entire University of Rwanda!”) but also how this abundance allows for more interaction between students and teachers and the opportunity to go into more depth with each subject.

Math and physics teacher Eugenia Uwamariya, who has previously traveled to Kenya, Malaysia and Japan for trainings, is “interested in everything,” according to Cottrell.

Arriving home each day after school, Uwamariya bursts through the door and yells, “Hi Mum!” with teen-like exuberance, anxious to share the day’s events. The two women host dinners, visit friends, attend Creative Memories workshops, and check out movies and books from the library. Villagers Ann Taylor and Mitzi Manny took Uwamariya to see zoologist and wildlife conservationist Jack Hanna speak at Cedarville University, where Hanna discussed the gorillas of Rwanda. Uwamariya also accompanies Cottrell to Friends Care Community where she assists with the care of Cottrell’s husband, Jim.

Like her male colleague, Uwamariya noticed how books, copiers, projectors, and computers free up the instructor’s preparation time. But she also noticed something else: no uniforms.

“When you are in uniform,” Uwamariya explained, “if you are rich or you are poor, you cannot notice. You are the same.”

Without the uniforms, she said, students spend time wanting what someone else has rather than focusing on their studies.

For Tony Gasana, 17, the top student in his class for the past three years, every day is a day of scientific discovery at the home of Meg Carver and her children, Malaika and Traven. A box of sparklers, a bottle of bubbles, a Slinky, snow, contact lenses, popcorn, the freezer, and a trip to the dentist all provoked deductive discussions and Google research. And relief.

“His tooth got fixed yesterday,” said Carver. “It’s been hurting since 2005.”

“Sometimes I feel like I live in the future,” Carver said as she showed pictures of Gasana from her digital camera. “I’m showing him how the stove works, what a toaster is, the microwave. I showed him how you could press a button and the house heats up or cools down. It’s like we’re the Jetsons. I’ve visited Third World countries, I’ve lived in the wilderness for months at a time without electricity or running water. But it’s a different perspective — to see my ordinary world through Tony’s eyes.”

Schlueter sees many benefits to the educational and cultural exchange.

“Too many students in the U.S.A. take their huge advantages for granted,” he said. “The Rwandans who are visiting us are extremely poor materially, yet they are extraordinarily motivated. It is my fantasy that the opportunity will make our students realize their good fortune and work with more purpose in their studies.”

Last winter, YSHS French classes organized a French café where they baked French pastries, served Rwandan coffee and spiced tea and performed skits and music as a fundraiser for Ecole des Sciences. They raised $1,200. Another fundraiser is planned for spring 2009.

“It costs $500 to go on a tour to see the lowland gorillas,” said Carver, “and it costs $250 to sponsor a child for a year to go to school. Al has never seen the gorillas. He prefers to send children to school.”

Brother Malisaba returns mid-December to accompany the group back to Rwanda on Dec. 19. The group plans to give a public talk about their experience before they leave (watch for details in YS News). For more information about the school, go to http://web.mac.com/pcherlihy/ or contact Al Schlueter at 767-7468.