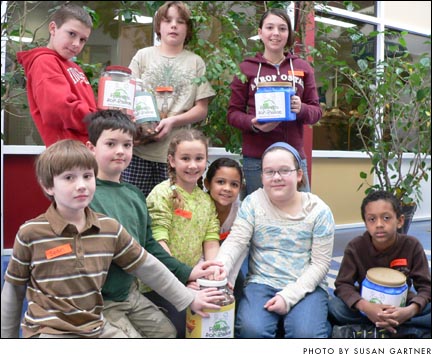 At Mills Lawn School, a penny saved is a penny learned

The ad hoc public relations team hurried down the hall, snaking their way past the lobby where colorful flags from 20 different countries hung from the ceiling. The group quickly grew in number as they stopped to collect more members en route to the 10:45 a.m. press conference. Sometimes a quick hug with a new arrival would take place before continuing on. The group, representing varying levels of fundraising experience, squeezed around a small, round conference table to discuss the project, how it got started, and what they had learned so far.

McKenna Banaszak-Moore began the meeting by stating that the money being raised will be used to assist people in Afghanistan and Pakistan, “to help build schools and let girls have an education.”

Sean Adams said that he and fellow fundraisers had recently watched a video documenting the immense poverty that gripped the tiny village of Korphe in Pakistan. Not only were schools absent from the village but basic teaching tools as well, such as paper, pencils, and desks. “The people had to write on the ground with sticks,” Adams said.

“There was no building,” added Eric Romohr. “They were outside. They weren’t sitting on anything — just a rock.”

As difficult as it is for the children of that region to get an adequate education, the team explained, it’s even harder for girls.

“Most people think there’s no reason for girls to go to school,” said Modjeska Chavez, describing the menial jobs traditionally reserved for girls and women and the culture’s belief that girls won’t make proper use of an education.

Was this a meeting of a multi-national corporation pooling their global resources to do good works? Nope. Just another service-learning project for the students at Mills Lawn Elementary School, coordinated by guidance counselor Linda Sikes.

“I teach a class called Skills for Life,” said Sikes, who is in her fourth year at Mills Lawn. One aspect of the class, she explained, is character education: philanthropy, service learning, giving back to your community. “That is something I am very committed to. I feel it’s an important part of being a responsible citizen of the world.”

At least once a year, Sikes organizes a project or awareness curriculum around character education. Past efforts include raising money to help cover medical expenses for a fellow student, Tyler Kimball, who was undergoing cancer treatment. Another year funds were raised to help victims of an earthquake in Pakistan.

This year’s project is Pennies for Peace, a mission of the non-profit organization, Central Asia Institute, which focuses on community-based education, especially for girls. Sikes learned about the program after reading the best-selling book, Three Cups of Tea: One Man’s Mission to Promote Peace…One School at a Time. The book recounts the 1993 journey of CAI co-founder Greg Mortenson from a failed attempt to climb the world’s second highest mountain (Pakistan’s K2) to successfully establishing 78 schools (and counting) and promoting girls’ education in remote regions of Pakistan and Afghanistan.

According to the book, Mortenson (who spoke at Books & Co. in Beavercreek on Saturday) was born in Minnesota to missionary parents who took him, at three months of age, to their first teaching post in Tanzania. At age 11, he scaled Mount Kilimanjaro. As an adult he led climbs through the cliffs of Yosemite and mountains of Nepal.

The K2 climb, however, proved too much for the mountaineer. Dehydrated and disoriented, he barely made it down the mountain and into the village of Korphe, where villagers nursed him back to health.

“Even though they were poor,” explained fifth grader Keanan Onfroy-Curley, “they still helped give him food and everything. He wanted a way to reward them so he said he’d build them a school.” Pennies for Peace began at a school in Wisconsin where Mortenson’s mother was principal. The students there collected 62,345 pennies. “Then it went nationally,” continued Onfroy-Curley. “A lot of schools around the U.S. are donating pennies to build schools and buy school materials.”

Part of the project’s appeal is that it deals with a commodity easily managed by young fundraisers.

“My mom has a glass jar of pennies and she let me take them to school,” said second grader Jenesis Williams, whose prior fundraising experience includes proceeds from a lemonade stand going to victims of Hurricane Katrina.

“I find them on the counter in the laundry room in my house,” said Salazar.

“I find them in drawers in my room,” said Romohr, “laying around the house, under the bed.”

Second-grader Tyreese Benning took a more direct route. “I gathered all my piggy banks and brought them to school,” he said.

Each classroom has its own penny jar. Donations from the community are being taken until mid-February and can be added to the jar in the school’s front office.

According to their informative Web site, http://www.penniesforpeace.org/, “literacy, for both boys and girls, provides better economic opportunities in the future and neutralizes the power of extremist leaders.”

“Mortenson feels that the key to peace is the education of the girl,” explained Sikes. “They won’t want their sons going to war and therefore they’ll have more of an incentive to work towards peace.”

A chilling article in the Jan. 14 issue of The New York Times adds considerable weight to Sikes’ project. In November, 15 students and teachers of the Mirwais School for Girls in Kandahar, Afghanistan, were attacked with acid, an attack intended to keep the girls — and their classmates — from attending school.

“Some of the students at the Mirwais school are in their late teens and early 20s,” wrote Times reporter Dexter Filkins, “attending school for the first time. Yet at the same time, in the guerrilla war that has unfolded across southern and eastern Afghanistan, the Taliban have made schools one of their special targets….In the months before the attack, the Taliban had moved into the Mirwais area and the rest of Kandahar’s outskirts. As they did, posters began appearing in local mosques. ‘Don’t Let Your Daughters Go to School,’ one of them said.”

Pennies for Peace simultaneously raises the status of girls along with the lowly penny.

“I had a big piggy bank full of pennies I never used,” said second grader Meryam Raissouni. “I didn’t think the pennies could do stuff for people in Afghanistan and Pakistan.” When she found out just how far a penny could go, she donated her stash.

“I think it’s about how people in the United States have the right to have an education and there’s really no question about it,” said sixth grader Chavez. “Sometimes they misuse that or they don’t want to go to school, but people other places who don’t have that right would use every chance they get to go to school.”