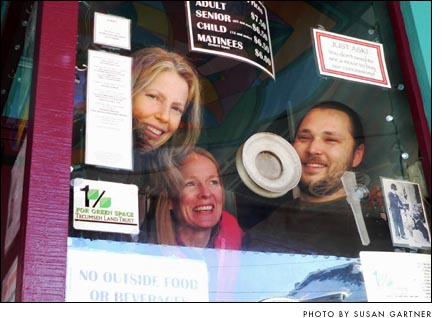 But Cowperthwaite is not taking this discouraging trend and the current challenging economic situation lying down. Rather, she and several other local business owners are hatching creative solutions that they hope will strengthen not only their individual businesses, but the community as a whole.

Cowperthwaite, who has managed the theater for 30 years and owned it for the past 11, has kept the Little Art viable as she continues to forecast fickle audience tastes and navigate the tricky terrain of ticket sales and technology. While the movie-making industry worldwide has shifted their reliance on profits from the “front end” of the business (box office ticket and concession sales) to the “back end” (DVD sales and rentals), film distributors are placing increasingly unrealistic demands on the small-town, single-screen theater’s profitability and programming schedule.

“Operating a movie theatre is very expensive,” said Cowperthwaite, explaining her view from the projection room. And the high overhead costs include renting and shipping films, high utility bills, and payroll. “You’ve got to bring in $3,000 a week, and the Little Art doesn’t bring in that kind of money.”

And that’s only the half of it.

With the increase in home entertainment options such as DVD rentals from Blockbuster and Netflix, pay-per-view movies on cable, and downloaded movies from the Internet, the decline in movie theater attendance countrywide has been steady, slow and painful. Add in weeks of winter weather and the all-too-easy temptation to hunker down at home with a DVD and a bag of microwave popcorn and it’s easy to see why small theater owners are scrambling -— along with their neighbors.

“The Winds can tell when we’re doing well,” said Cowperthwaite. “There’s a connection there.”

Good times at the Little Art trickle down, or rather over, and down the block to local restaurants.

“People don’t want to just come to The Winds,” said The Winds Cafe & Bakery owner Mary Kay Smith. “They want to come here and go to the movie or come here and go shopping. If all these shops aren’t open or they’re not doing well, then I won’t be doing well either.”

At the time of this interview, Smith was preparing to be interviewed by the Dayton Daily News for an article about restaurants in general and the economic downturn that has been a focus of the National Restaurant Association.

“We’re well aware of the fact we’re a luxury, not a necessity,” said Smith.

Over the many years they have known one another, Cowperthwaite and Smith have discussed different ideas and ways to connect their businesses.

“When you have a small business and you do so much of it yourself, you’re doing more than ever just trying to keep things rolling,” said Smith.

The implementation of any good idea, they explained, takes a support team in the background to handle all the details, such as marketing and publicity, printing up special tickets, and making sure all employees are up to speed with the new routine. And for both business owners, that team was not in the picture.

That is until last year when, like a scene out of a classic movie western, the Little Art Theatre Advisory Committee rode into town. In actuality, they didn’t ride into town (most members are Yellow Springs residents) and there was no grand entrance involving horses, chaps, and cowboy hats.

“I picked a few people and asked if they would be willing to help me with the Little Art,” Cowperthwaite said. They decided they would call one-screen theaters across the country and talk to the owners about what was going on with their theater and how they were responding to the changing industry. Committee members Kipra Heerman, Jane Baker, Laura Carlson, Macy Reynolds and Kevin Rose polled villagers as well for suggestions.

The committee’s dedicated efforts culminated in the birth of a notion.

On Sundays, beginning Feb. 15, participants can purchase a special brunch-and-a-movie ticket at The Winds that will be dated and good for that afternoon or evening’s film. Seating for brunch is from 10 a.m. to 2 p.m.

“For $15 you get brunch and a movie,” said Smith. “I think it’s a great idea because Sunday is one of my favorite times to go to the Little Art.”

A second restaurant will offer a similar discount on Monday evenings. Beginning Monday, Feb. 16, a dinner-and-a-movie ticket for $20 will be available at the Sunrise Cafe.

“I’m pretty excited about it,” said Sunrise owner, Brian Rainey. “It’s something I’ve had customers mention to me over the years, that we ought to do something with the Little Art like this. I think it’s cool that we actually got around to doing it!”

“You come into Sunrise and say, ‘I’m here for a dinner and a movie,’” said Rainey. “You have dinner and then go down to the theater.” Patrons are asked to arrive by 6 p.m.

“On a Monday night at 7 p.m., if you go to Regal Cinema [the multiplex theater in Beavercreek] it’s going to cost you $10.50 to get into the movies,” said Heerman. “If you went to a fast food place for dinner and then to a movie, you’re going to be at $20. Here you get a three-course meal and a movie.”

For both restaurants, the price does not cover drinks, tax, or gratuity. Carryout orders are welcome.

“In many ways I hope it inspires people to do the same kind of thing and grow the ‘shop locally’ mentality that we need even more so these days,” said Rainey.

“Some of the things at the top of [Shuman’s] ‘buy local’ list were ‘Get your entertainment locally,’ ‘Get your drinking locally,’ and ‘Businesses should come together and figure out how to make it more enticing for local people,’” said Heerman.

The three business owners’ creative response to a difficult time is a lesson for us all: when life gives you lemons, make lemon-gorgonzola pesto.