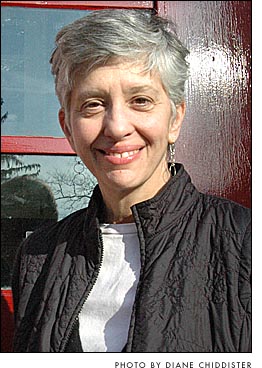 During the recent spring fundraiser for WYSO Public Radio, new General Manager Neenah Ellis was frequently on the air. In broadcasting jargon, she was making a pitch for cash, but her presence didn’t seem that of a salesperson. Rather, she seemed to be a warm human being speaking deeply and directly to another.

“Radio has this mysterious quality,” she said later. “You put something out there into the ether. It’s intimate. You’re talking to one person. It’s what makes radio so powerful.”

In her second month as general manager of WYSO, Ellis faces both an exciting new challenge and a return to her roots. Overall, she said, she is “ecstatic” to embark on this adventure.

What’s new about the job for Ellis is managing a radio station. While she’s had a distinguished 30-year career with National Public Radio as a producer, writer and reporter, she has not had the day-to-day responsibility of running a station. So far, she finds the excitement of working closely with staff and hearing from listeners to be compelling.

“At NPR, it took forever to hear from listeners after doing a program. This feels more direct and immediate. It’s gratifying,” she said. She’s also impressed with the enthusiasm, dedication and skill of the station’s small staff, who had been working for almost a year without a manager, since Paul Maassen left last spring.

Maassen took significant steps toward healing a rift between WYSO and the Yellow Springs community that began years ago with former manager Steve Spencer. Long a station grounded in an eclectic volunteer programming with a local focus, Spencer in 2002 cut many of the long–running popular volunteer shows in favor of nationally syndicated programs. The action sparked a rift with many longtime WYSO activists, who formed Keep WYSO Local. That group continues, and recently met with Ellis. During the fund-raising drive, several callers stated that they were only now renewing their WYSO membership, which had lapsed since the 2002 changes.

She’s grateful for Maassen’s efforts toward community building, Ellis said, and she hopes to go further reaching out to Yellow Springs. Many hard feelings remain, she knows, and she hopes that those who harbor them give her and her staff a new chance.

“That whole situation was painful,” she said. “I hope they give us the benefit of the doubt.”

She would like to see WYSO do more of what it did well in the past, Ellis said, including local news and programming. Her first goal is to beef up local news coverage, and she is currently working with her news staff to do so.

WYSO is unique, Ellis believes, as one of the few independent stations with an eclectic format. She took the job because she’s attracted to that eclectic nature, and she wants it to continue. But she’s also well aware that the nationally syndicated NPR shows tend to be the money makers.

“It’s a tricky balance, finding programs that bring in money and still keeping the community heart beating,” she said.

Finding that balance will be a challenge, especially in difficult financial times, but Ellis is up for it.

“I like jumping off a cliff once in a while,” she said. “I like a steep learning curve.”

Ellis has managed a staff of people before, so that part of her new job is comfortable. She has long written and produced her own programs, so she knows that part cold, and she’s also knowledgable about technical issues. In fact, she said, the only part about running a radio station that she feels shaky about is finding financial underwriters, and if she runs into trouble, “I’ll call my dad and my brother,” she said. “They can help.”

And this is the part about Ellis’ new job being a return to the past. She grew up with radio. More specifically, she grew up on the radio, first as an occasional performer in the country Western music show her father hosted in Gary, Ind., and later delivering the local news on air after her father and mother bought their own station.

A first generation immigrant from Croatia, Ellis’s father returned from World War II and cast around for a career. He loved singing and performing, and, after taking a few classes in radio broadcasting, he began a long radio career, first at WWCA in Gary.

Musicians for the show would frequently come from Nashville and rehearse in the Ellis family’s back room.

“I grew up thinking that this was normal,” Ellis said.

She also grew up thinking that it was normal to love the world of radio, as her father did. She hung around the station when he did his shows and later, when her parents bought their own station in Valparaiso, Ind., Ellis found herself on assignment at the county fair, interviewing kids with livestock.

“I loved hanging around all of that,” she said. “I’ve been around it all my life.”

After going to college at Drake University, Ellis briefly considered a career as a political journalist, and took an internship in Washington, D.C. But it didn’t take long for Ellis to return to radio, since she was offered a job in a Washington, D.C. public radio station. Public radio was a different world than the commercial radio she’d grown up with, and she found herself with what seemed long stretches of time to do interviews or present information, rather than the two-minute slots she was used to.

“It opened up a whole world and let me write and be creative in a different way,” she said.

Soon, Ellis began a 10-year stint at National Public Radio in Washington, where she worked as a field producer overseeing a wide variety of programs. Her work took her to Iowa, where she produced stories on the farm crisis in the early 80s, to the Democratic and Republican conventions, and to Cheyenne, Wyo., for a series of programs on nuclear preparedness.

Also at NPR, Ellis met her future husband, Noah Adams, the host of “All Things Considered.” Together Adams and Ellis left Washington to work at Minnesota Public Radio, where Adams had been picked to succeed Garrison Keillor, who was leaving his popular radio program, “The Prairie Home Companion.”

“It was amazingly fun,” Ellis said.

But after several years, Adams was again offered the host duties of “All Things Considered,” and the couple decided to return to Washington. Because they were now married and NPR had rules against married couples working together, Ellis began working as a free-lance producer, writing and producing scripts that she then sold back to NPR. That job took her around the world, including stories in Russia, South Africa, Mozambique and Sarajevo during the height of the ethnic warfare.

“It was incredibly terrifying,” Ellis said of being in Sarajevo, where she had wanted to go because she had family living there. But following that assignment, Ellis decided to stay put in the United Stated for a while.

Back in the states, Ellis became interested in interviewing octogenarians, and she proposed a series of interviews with those older than 100, which was funded by the Corporation for Public Broadcasting, or CPB. It took several years to travel the country, spending several days with each of the octogenarians she had found. The experience changed her life, Ellis said, since she found herself inspired by the positive attitudes and humor of the older men and women she came to know. What she didn’t expect, though, was how popular the series would become.

Ellis then wrote a book on her material that became a New York Times bestseller, and seven years later is still in print.

Yellow Springs began popping up on the couple’s radar when Adams came to WYSO to help with fundraising as part of his hosting duties. He liked the town, and the couple soon met filmmakers Steve Bognar and Julia Reichart at a summer media institute, and the four became friends. Then in 2002, Adams needed to come to the area to research a book he was writing on the Wright brothers, and they lived in Yellow Springs for the summer.

Ellis and Adams had been looking for an opportunity to get out of the city and move to a smaller community, something with an arts and academic community. While they considered towns like Madison, Wisc. and Chapel Hill, N.C., both Ellis and Adams had family close to Ohio. So when the WYSO job came up, Yellow Springs seemed a good fit.

Having recently bought a house in town, the couple is beginning to settle in, although Adams has been in Washington for his work and Ellis has worked long hours at the station. Adams recently retired from his hosting job, and he will now work as a correspondent out of Yellow Springs.

“I’m ecstatic to be here,” Ellis said, describing how, when they lived in town before, she loved riding her bike through the neighborhoods at night, amazed at how safe she felt in the quiet darkness, a far cry from Washington, D.C. One day she e-mailed all her friends about the strange sight she had just witnessed: the chief of police was passing out doughnuts to children going to school.

“That nailed it for me,” she said of her decision to live here.

She will be challenged, Ellis knows, in this difficult economic climate to make WYSO a financially viable radio station that can still connect deeply with the community. But she means to give it her all, and in doing so, will be doing something she loves best: in the quiet of a broadcast studio, speaking to just one person, carrying on the magic of radio.