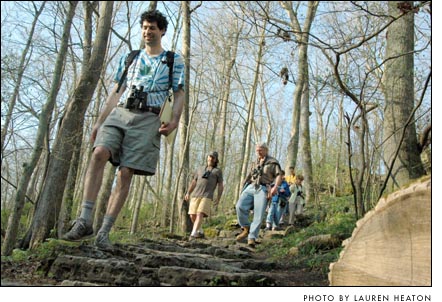 Glen Helen Director Nick Boutis and 12 local birders saw and heard a phoebe, a yellow rumped warbler, a screech owl and what they guessed was a Cooper’s hawk soaring high above the trees on Sunday morning. The bird hike was a preview to the annual bird counting event, Make It Count for the Birds, to be held on Saturday, May 9, during the month the Glen will celebrate its 80th birthday.

Morning may be considered a quiet time for humans, but for birds it’s all about chatting. Male red-winged blackbirds call to their drably dressed counterparts, downy woodpeckers impound their beaks for breakfast nibbles, and goldfinch streak through cedars in their chase as cardinals try to drown them all out with unsubtle piercing refrains.

The village teems with this natural orchestra partly because its home in Glen Helen has been protected as a 1,000-acre nature preserve since Hugh Taylor Birch gifted the northern half to Antioch College 80 years ago as a memorial to his daughter, Helen. For Nick Boutis, avid birder and Glen Helen Ecology Institute director, seeing the Glen as a memorial sanctuary helps frame the community’s stewardship responsibilities of the Glen in a respectful and delicate way.

“The Glen is here because a woman who we never knew died young, and her father sought to have a memorial that lived on in her name,” he said this week. “That carries with it something contemplative and melancholy, and it reminds us of how this place came to be one of Yellow Springs’ greatest assets.”

The Glen Helen Association will celebrate the birth of the preserve at its annual meeting on Wednesday, May 6, at 7 p.m. in the Glen Helen Building. Antiochiana historian Scott Sanders will give a talk about Birch entitled, “What a guy, what a life,” followed by a birthday dessert.

The Yellow Spring, widely known for its healing powers, was attracting visitors well before Birch or Antioch was here. According to Two Hundred Years of Yellow Springs, the Shawnee ventured to the spring, and early local settlers advertised its celebrated mineral waters to draw visitors to what would be the Neff Hotel in the 1870s and later the Neff Park grounds. The college hosted the Antioch Chatauqua there near the turn of the century. But it was Birch, who grew up playing in the Glen and attended Antioch College in the early 1900s, who secured its future as a nature refuge.

Birch became a lawyer in Chicago and worked for Standard Oil, according to the Glen’s Web site, but he never forgot what the Glen meant to him. He always wanted the students at Antioch to have a place “to walk and play and be near to nature,” as was quoted in Horace Mann at Antioch. So having purchased most of the northern Glen, when his last surviving daughter Helen Birch Bartlett died in 1925, he conceived of establishing a memorial preserve for Antioch College in her honor.

And in 1929, Antioch graduate Lucy Morgan, who feared that the Glen would be lost to an amusement park, appealed to Birch to donate the nearly 600 acres to the college, which he did.

On his death in 1943, Birch gave the college a $1 million endowment and $500,000 to help maintain the Glen, acording to Two Hundred Years of Yellow Springs. Many other parcels were donated by the Whitmore family, the Dewine family, the Nature Conservancy and others to make what is now the Glen, Boutis said.

In some ways over its 80 years, the Glen has come closer to its natural ecological state, Boutis said. Birch brought with him a conservation philosophy influenced by Theodore Roosevelt that aimed to enhance the beauty of the natural resources by building limestone walls in the preserve, for example. Morgan and her husband, Arthur, former college president, also solicited from alumni and donors plant species from around the country to add to the beauty of the Glen. Later, Antioch’s physical education department and others used the Glen for camping and unfettered recreation.

“What it means to be a nature preserve has evolved over the last 80 years,” Boutis said. “The management philosophy about how to preserve the natural systems has changed, but we’re also trying to manage the preserve more than ever now.”

Though its leaders now strive to maintain the Glen’s native ecosystem by promoting only native species and reducing the human impact as much as possible, there are forces working against them. Invasive plants that have spread throughout the village, polluted waters, and visitors who don’t recognize the need to keep themselves and their pets on the trails can have devastating effects on the natural balance of the relatively small preserve, Boutis said.

When the Glen’s Outdoor Education System was established under former Glen Director Ken Hunt’s tenure in the 1950s, education for youth and the community became a priority. Then community members opposed to having a sewer main built through the Glen organized the Glen Helen Association in 1960, and a decade later came the Raptor Center. All of this activity built community awareness of the importance of protecting the Glen as a natural resource, so that, according to Boutis, in the ’70s, under Director Ralph Ramey, the Glen reached its peak support of 1,200 members.

“Our job is to get back to that,” Boutis said.

The GHA currently has 900 members, but its visitors have increased to approximately 100,000 per year, which means that more than 99 of every 100 visitors are not contributing to the Glen’s care. Put another way, or however many translations it takes, less than 1 percent of the Glen’s users are participating in its maintenance as a preserve.

“We are trying to shift the culture to get everyone to see the care of the Glen as a shared responsibility,” Boutis said. “There are few Yellow Springs entities that represent the face of Yellow Springs like the Glen does. So there’s a reason the Glen should have a special place in the hearts of local residents.”

The Glen has grown from an annual budget of $700,000 when Boutis came in 2006 to a total of just under $1 million through an increase in membership and grant funded projects. The Glen supports a staff of 25, half of whom are interns who rotate each semester, who are needed to manage all of its visitors, including about 6,000 to 7,000 who come through the OEC for school programs, summer camps and weekend retreats each year, Boutis said.

So that when the Glen receives a sizable donation, such as the $250,000 given recently by an anonymous donor (most of which was added to the Glen’s endowment), its leaders are thrilled, but they’re still hoping that 40 other contributors can manage gifts of that magnitude to put the preserve on stable footing, Boutis said.

The support will go toward protecting the homes of the 88 species of birds found at last year’s Make It Count annual Glen bird count during peak migration season. Hesitant to look at birding as a competitive sport, Boutis hopes that the bird counts will help people gain “the fullest possible picture of the diversity the Glen supports.”