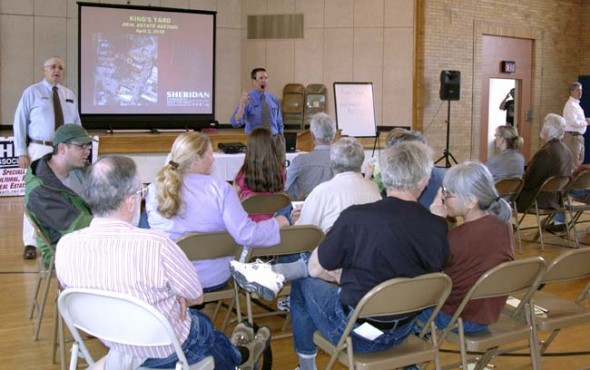 Several Kings Yard retailers showed up at the Bryan Center on Friday, April 2, to attend the auction of the yard’s long north building, which was purchased by Dave Chapelle for $470,000. (Photo by Diane Chiddister)

Comedian and local resident Dave Chappelle is the new owner of the northern section of Kings Yard after an auction in which he outbid local real estate owner Bob Baldwin.

Chappelle, through a representative, bid $470,000 for the 7,500 square foot building, which houses 10 retail spaces in Kings Yard. The property includes the spaces currently occupied by Bonadies, Jennifer’s Touch, Yellow Springs Pottery, Toxic Beauty, Tibet Bazaar and Art Happens. It does not include Rita Caz.

Current Kings Yard owner Cathy Christian will retain ownership of the rest of the property, including Ye Olde Trail Tavern and the space occupied by Asanda and Sam and Eddie’s Open Books.

In a brief interview before going to the bank following the auction, Chappelle said he had not actually expected to purchase the building that day. He said he has no specific plans for the space at this time , but hopes that whatever he does “will improve the quality of life for the people who live here and those who visit here,” along with the current shopowners.

“I’d love to have the town’s support,” Chappelle said, stating that the purchase is the most money he has spent in town. He added, referring to his wife, “Don’t tell Elaine.”
For more details, read the print version of the Yellow Springs News on Thursday, April 8.