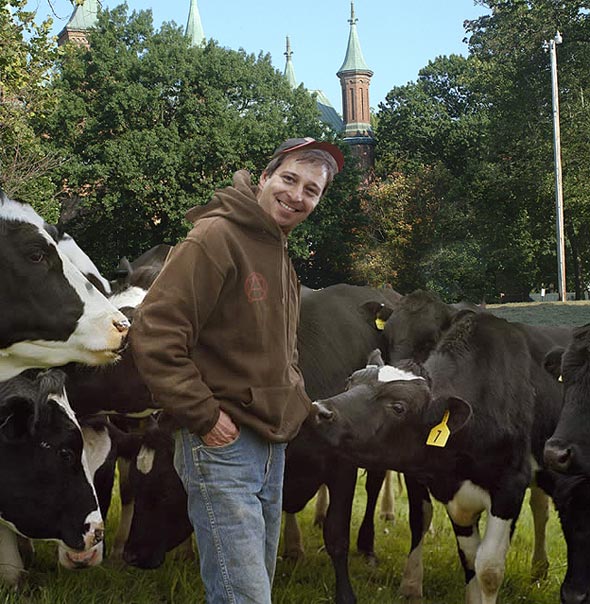 In a surprise move, the leaders of the new Antioch College recently announced that they’re scrapping plans to reopen the school as an independent liberal arts college. Instead, they plan to launch a center for the production of alternative energy, specifically, converting bovine feces into biogas.

Several factors have contributed to school leaders’ change of heart. First, according to Dirt, the sort of idealistic, progressive-minded students who flocked to Antioch in the 1960s may be in short supply. Instead, Dirt said, today’s college students appear somewhat demanding, especially regarding campus amenities.

“They want WiFi, they want sushi,” he said, sadly shaking his head.

In contrast, cows don’t want much of anything, Dirt pointed out. In the new program’s first step, Antioch has already trucked in 1,059 Holsteins to graze on campus. The cows are located at the former college “golf course,” which will be renamed the “gas source,” as well as on the lawn in front of Main Building and sprinkled around campus. In cold weather, the cows will be moved inside, to Main Building and South Hall, among other places.

While the historic campus buildings were not intended to house barnyard animals, leaders believe that any damage they cause will be minimal.

“At least it’s not as bad as the flooding,” Dirt said, referring to the problems caused by bursting pipes when the campus was shuttered by Antioch University a year ago.

The biogas project is expected to cost far less than housing college students, according to Derr, who pointed out that the cows appear quite happy (“contented, even,” he said) with the buildings in their current decrepit state.

The five Arthur Morgan Fellows, to be renamed the Arthur Morgan Farmers, will face a change in their job description, Dirt said. While the group of former Antioch College faculty has until now been designing a new curriculum, they will from now on assume their “critical role” in scooping up the cow feces and depositing them into the large “poop lagoon.” The lagoon holds the feces, which are mixed with water and treated to remove waste products. The new mixture releases methane gas, which is then burned to produce electricity.

While the Farmers’ new jobs are not on tenure track, Antioch will do its best to continue its tradition of empowering faculty, Dirt said. For instance, to help instill pride in their work, the Farmers will be issued matching overalls, pitchforks and red bandannas.

“The pitchforks are a nice touch, don’t you think?” Dirt said, emphasizing that the tools, which often symbolize working-class protests, bring to mind the Antioch legacy of fighting for social justice.

Yellow Springs leaders are also supportive of the change, especially the production of new jobs for villagers. While most of those jobs involve shoveling poop, they are excellent entry-level positions for young people, Dirt said. Also, he stated, the mindless manual labor provides workers with plenty of time to think about other things, and such mental downtime has been known to promote “creative thinking,” another hallmark of the Antioch College experience.

The idea for the project came when Dirt recently traveled overseas, and discovered the popularity of biogas in Europe. There are 8,000 biogas centers in Europe, and only about 150 so far in this country, according to Dirt, who saw an opening in the American market. After researching biogas operations, he presented the idea to the trustees, who signed on. While the project could be a hard sell to Antioch College alumni, who are notoriously stubborn and sometimes even refuse to die until they have won some victory for humanity, Dirt believes they will eventually come around.