Welcome to all of you who are new and not-so-new to our lovely little village of Yellow Springs (I’m somewhere in between, I think, probably closer to new by most standards). Welcome also to everyone else, visitors and would-be visitors, former Springers, friends and strangers.

I would like to introduce you to Yellow Springs. And even if you’ve lived here all your life, you may not have been properly introduced. This is also a thinly-veiled introduction to me, your new blogger and friend, and a sneak peak at what this blogging adventure might bring… 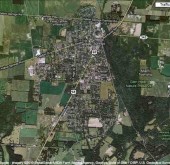 • Yellow Springs is in the Dayton Metropolitan Statistical Area, in Greene County, in Ohio, in the United States of America, in North America, in the Americas, in the northern/western hemispheres, on the Earth, in the Solar System, in the Milky Way Galaxy, in the observable universe.

• Yellow Springs was founded in 1825 by about 100 families who wanted to emulate the utopian/communitarian community of New Harmony, Indiana. It didn’t work. (New Harmony didn’t work either.)

• Yellow Springs was one of the final stops on the Underground Railroad. Elizabeth Buffum Chace, remember her, from Central Falls, was also an operator, but up in Rhode Island, not in Yellow Springs.

• Home of 3 cafes, 3 bars, 3 restaurants (that are sit-down-wait-staffed and that are not also bars), 3 parks (of significant size), and 3 real estate agents (one of which is the home of my favorite villager, Coconut).*

• Home of lots of other places to get good food and an increasing number of small CSA (community-supported agriculture) farms and farmers’ markets.

• Home of Tom’s Market, where I found a pearl in an oyster (which they occasionally sell, mainly during Thanksgiving).

• Tomorrow is my birthday.

• I miss Molladoor’s, remember that place? And the novelty shop with the Hershey’s ice cream and retro lunchboxes!

(*These numbers may be up for debate. Discuss.)

I realize this primer is perhaps inadequate for a lot of you, but I don’t want to bore/overwhelm you with the first post. I would like to invite you to post your fun facts and trivia and history about Yellow Springs, as it relates to you or your fancy. And stay tuned for more tidbits and the occasional in-depth exploration.