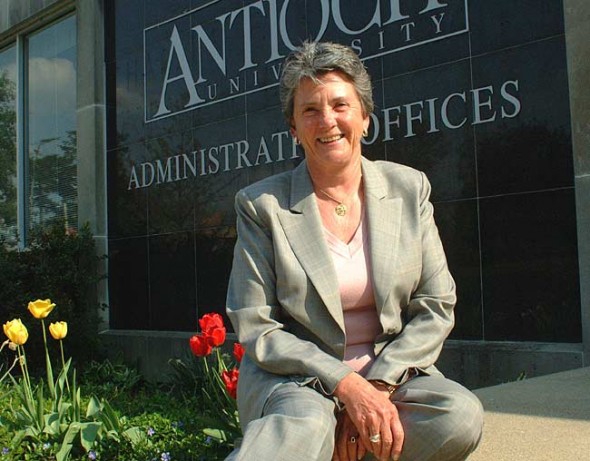 Under the leadership of Chancellor Toni Murdock, Antioch University spent the past year restructuring the administration of its now five campuses and learning to function as "a university of one." (Photo by Lauren Heaton)

Eight months after severing ties to the college that bred it, Antioch University is looking deeply at itself and clarifying its mission as a single system that serves adult students at multiple campuses around the country. No longer limited to just the physical campuses, the university is exploring how to increase capacity by making the strengths of each campus available to the university as a whole. Along with investigating opportunities in the virtual world of education, Antioch’s leaders are also considering whether Yellow Springs is necessarily the best place for its headquarters to remain.

In an interview last week, University Chancellor Toni Murdock said that since officially separating from the college last September, the university has begun to increase its financial surplus and reinvest in both its programs and its facilities.

“This past year we’ve been able to concentrate on the university, and begin asking ourselves, what is it we really want to be?” she said. “We have the full attention of the board as we look at strategic planning.”

Structural change
Last year the university fundamentally changed its internal operations structure by dissolving the university’s board of trustees and creating instead a board of governors. The university further directed each of its five campuses to establish its own board of trustees. The shift was crucial in leveraging the local support that each campus needs to engage with its surrounding community and engender a philanthropic base of people who value the school’s presence, Board of Governors Chairperson Art Zucker said last week. While the university’s Board of Governors maintains fiduciary responsibility for the system as a whole, the local boards have the authority to oversee the programmatic and budgetary needs of their individual campuses, Murdock said. The new boards will also serve to strengthen local connections by “knowing the educational needs of the community and helping our program stay serviceable to the community and its students,” she said.

Since January the university’s leaders have also embarked on a strategic plan that has led them to ask fundamental questions such as, Who are the students we serve? What is our mission? How do we leverage our resources to strengthen both the university and its campuses? According to Zucker, leaders have even talked about opening another campus.

Antioch University students, it turns out, are what Murdock called “the new majority student,” or adults between the ages of 25 and 37 who are looking to complete their undergraduate studies or attain higher degrees and whose numbers have begun to exceed traditional-aged students typically headed for residency programs. According to Murdock, traditional 18-year-old students represent a declining segment of the national student body, and statistics show that for the first time in history, the level of education of people over 30 is higher than the education level of young adults. Yet those same older students are still underrepresented in the current field of education, she said.

“We’re seeing more and more of a need for degree completion programs for those looking for jobs that require higher degrees, and we feel positioned for that,” she said. “We need to make an exceptionally high commitment to those types of students.”

The foundations of the university’s mission remain the same as those that Antioch built itself around, including concepts of social justice, diversity, sustainability, and community and civic engagement, Murdock said. But the Board of Governors and the University Leadership Council are currently discussing how to implement those concepts within a fiscally manageable educational system. They aim to complete the strategic plan by the end of 2010, Zucker said.

While the university is still committed to student-centered learning, many of its leaders feel that student-faculty connections can occur successfully through online programs, he said. And having programs online means that students anywhere in the country, and conceivably the world, could access them.

“My dream is that an adult learner at any point and place in the U.S. could get an Antioch University education using our campuses and online program,” he said.

Zucker, an Antioch College alumnus, plans to step down as the chair in June 2011, when he will be replaced by the board’s Vice Chair Larry Stone. Zucker will still be eligible to complete his term as a board member.

New and shared programs
Antioch University McGregor’s President Michael Fishbein, who will be officially inaugurated in June, sees the university-wide goal on his campus this way:
“What we do, we do well, but we don’t offer as many programs as we could or should to sustain our resources over the long term,” he said.

This year the university committed $7 million to fund academic innovation and initiatives to share resources between its five campuses, Antioch University McGregor, AU New England, AU Los Angeles, AU Santa Barbara and AU Seattle. The funds will be used, for example, to help faculty members who are leaders in their field to design shared courses and employ a combination of distance learning technology and travel to share instruction across the campuses. The courses go hand-in-hand with a new virtual learning center, which will provide to students and faculty at all the campuses support software, such as writing instruction, help with ESL, disability services and teaching tools.

“With this focus we are learning to be a university of one, and develop the cross-campus sharing we need to be doing,” Murdock said. “We want to utilize our resources so that the sum is bigger than its parts.”

The McGregor campus has been chosen to host a university-wide virtual library to replace the Antioch College library that formerly served the entire university. The online collection will include electronic periodicals and professional journals within a system that catalogues the collection of each campus and provides interlibrary loan services with the public library system.

The discretionary funds will also support a commitment to establish environmentally sustainable practices on all of the campuses, and to share the resource that the university’s radio station, WYSO, offers as a model for studios on the other campuses as well.

Enrollment and finances
While many other small, private institutions have struggled to survive over the past decade, Antioch University has remained relatively stable, Murdock said. The university’s total enrollment of 3,500 has not changed significantly over that same period (excluding the college numbers), and all of the campuses have exceeded their enrollment this year over last.

At McGregor, for instance, enrollment rose slightly from 700 two years ago to about 800 students this year, though in 2007, the school boasted an enrollment of over 900. While New England exceeded its enrollment goals by a small margin this year to just over 1,000 students, according to a news release in 2006 the school has experienced a decade of static enrollment of 1,000 students and “tight” budgets and is currently implementing a strategic plan for growth from 2007 to 2012.

Still university leaders credit their united governance system, revenue-based budgets and focus on adult students for what they see as the school’s buoyancy, and want to maintain an upward enrollment trend on all of its campuses.

“At a time when other institutions are cutting faculty and closing programs, we feel fortunate,” Murdock said.

While the university has also maintained a fairly flat $75 million budget for its campuses, losing the college last year offered the university the first time opportunity to reinvest some of its revenue into its other campuses. The Los Angeles campus, for instance, had a $700,000 carryover last year due to a bump in enrollment and good fiscal management, and the school invested the funds on land for a new facility.

“Because of the college’s financial situation, the board was so busy dealing with it that the rest of the university got very little attention,” Murdock said. “Now we’re able to say we’re an institution, and there’s no American university like us with our governance structure and value system.”

Headquarters for national system
As the university refines its goals and prepares to bulk up its capacity, the question of where the central hub of a nation-wide educational system should be, lingers. While the issue of location is not pressing, it is currently under discussion, Murdock said.

As an administration that regularly convenes meetings of its boards and leaders, the central office requires easy access to all of the constituent campuses. Antioch’s leaders need airports, hotels, highways and meeting facilities, as well as a community whose cost of living is proportionate to the services and amenities if offers, Murdock said. The administrative offices are currently located in Yellow Springs because of the school’s legacy with Antioch College, but the university is now looking at the advantages of staying in the village from a business perspective.

And as a school that aims to serve a working adult population, the priority is no longer to create an immersive experience with all the amenities and services in one physical campus, according to Fishbein. That affords the university greater flexibility in designing some virtual programs with residency requirements that make education more convenient for its adult students.

“We still have a desire for the faculty to be hands on, but we need to acknowledge that the students we get can’t afford to spend all day at school,” Murdock said. “It’s about using high-tech to be high-touch, and we need to figure out how to deliver an education like this.”