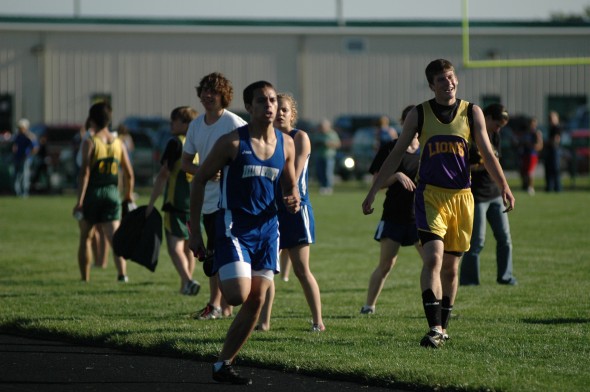 Birch Robinson-Hubbuch anchored the boys' 4x800 relay, which finished second at the league meet on Friday. (photo by Nick Dudukovich)

The YSHS boys and girls track and field teams placed second and third, respectively, in the  Metro Buckeye Conference meet at Troy Christian High School on Friday, May 14. Both squads turned in strong individual performances and used the contest to prepare for district qualifiers, which begin Tuesday.

The 4×800 relay team of Josh Meadows, Gabe Amrhein, Birch Robinson-Hubbuch, and Zach McHugh, are peaking at the right time. Although they finished second to Emmanuel Christian Academy, the boys turned in their fastest time of the year, 9:57.7.

Robinson-Hubbuch, who anchors the event, used the tough competition to get the most out of his ability.

“Emmanuel Christian did great, they pushed me,” he said. “It was fun to compete against somebody [of that caliber].”

Coach John Gudgel was pleased with his team’s performance, but couldn’t say for sure how the Bulldogs will do come Tuesday.

“When we go to districts next week, I’ll have a better idea of where we stand,” he said.

See the May 20 issue of the YS News for the full meet results.