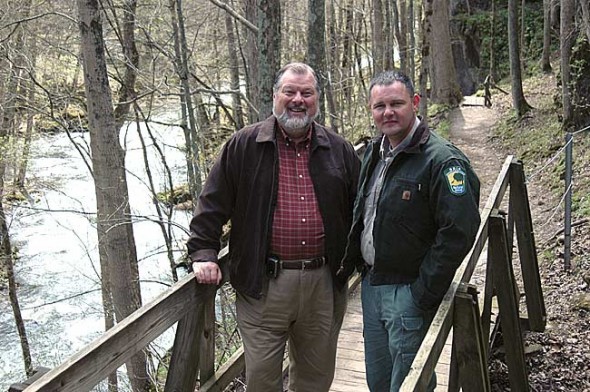 Down in the Clifton Gorge on a sunny Friday last month, the snow trillium matted the ridges sloping into the canyon, drawing area hikers eager to enjoy the first breath of spring. And though it was his day off, Southwest District Preserve Manager Shannon Hoffer was out on the trails too, educating visitors about the importance of staying on the path and keeping pets out of the preserve, as well as answering questions about the native species. It’s a constant balance of maintaining the two-fold purpose of the preserve, he said, to open the gorge to public hiking and birdwatching, while protecting its pristine and delicate ecosystem, which, certified as a nature preserve, is somewhat akin to a living museum.

But the managment of the gorge and the 133 other preserves like it in Ohio has been in jeopardy since the state’s budget for Natural Areas and Preserves was zeroed at the beginning of the year. With no resources to fund the state’s eight full-time preserve managers after January 2011, the Ohio Department of Natural Resources is looking for other funding sources to close the gap, according to ODNR Deputy Director Tony Celebreezy in a recent interview.

The current proposal is to try to expand the usage of funds from tax check-off contributions that citizens choose to make by checking the “Nature Preserves, Scenic Rivers and Endangered Species” box on their state income tax forms. The proposal would need to be passed as a bill amending the current tax check-off regulation that prohibits the funds to be used for salaries, Celebreezy said. If it passes, tax check-off can be used to pay the salaries of the preserve managers, who are otherwise unfunded beginning next year.

The budget cuts were no surprise, as last summer the Ohio Department of Natural Resources (which houses preserves) general revenue budget was cut again for a total of $40 million in the past two years to $90 million, Celebreezy said. That cut caused a squeeze all over, and caused the ODNR to dissolve four divisions and cut the others, as well as zero out the budgets for Geological Services and roll the division of Natural Areas and Preserves into the division of Parks and Recreation.

But at least for the Clifton Gorge, there may be help in places closer to home. Cedarville resident Matthew McNelly, who grew up in the area and has visited the gorge all his life, recently helped start a local Friends of Clifton Gorge association that aims to become a tax-exempt nonprofit group to support the preserve. McNelly believes strongly in protecting the natural and pastoral “treasures” of the area he still calls home. Those areas are part of the rural legacy of his family and of the entire region, he said, and they provide both an animal and a human refuge from the built world that encroaches daily on one’s peace of mind.

“Someone said that the neurosis we experience in the 21st century is in direct proportion to the lack of time spent in the woods,” he said, adding that he is grateful he has a peaceful and lovely place to go when he wants a release.

When McNelly was a youth in the 1970s, he recalls the gorge was overfished, trampled and heavily abused by area visitors. That was before the state instituted a management system for its preserves and assigned managers to maintain the trails, monitor the land and educate the public on the proper way to use the preserve. The state made an important distinction between parks, such a John Bryan State Park, whose central purpose is for human recreation, versus preserves, whose purpose is to protect the native flora, fauna and geology of Ohio’s land. Hoffer lives and breathes the difference every day in his capacity not only as a law enforcement officer but also as an educator.

“To me, these are the last remnants of nature in Ohio, and we leave these fragmented pieces open to the public where they can see running buffalo clover, cedar pines and many of the state’s rare plant species,” Hoffer said. Preserves are best for birding, wildflower sighting and researchers from area universities who use them to learn from Ohio’s natural history. “It’s different from the parks and recreation department which caters to camping, fishing, pets and play. We’re all about protecting the land.”

Clifton Gorge is the second most visited park in Ohio because of its dramatic cliffs and scenic waterway, which attract about 350,000 visitors each year. Much of its value derives from its beauty as a natural monument to the glacial cutting of dolomite and limestone rock that occurred all over the state several million years ago.

But Hoffer is challenged to balance his time at the Clifton Gorge with the other preserves in his Southwest District which is spread out between Cincinnati and Dayton over a six-county region. He and seven other full-time preserve managers operate the 134 nature preserves in Ohio in the same stretched manner. Whereas 12 years ago, the state employed 16 preserve managers around the state with plenty of full-time and seasonal land managers to help, budget cuts have forced fewer managers to take on larger areas with fewer staff members to implement programs. Last year Hoffer let go of five employees he relied on to clear the trails and control the honeysuckle, privet and other invasives, he said.

And here is where the Friends of the Gorge can be of real service, Hoffer said. When the honeysuckle starts getting out of hand or a bridge needs to be replaced, he hopes to be able to call on volunteers to help perform the work that the preserves no longer have the funds to hire out.

The effort has several supporters from Yellow Springs, including Talitha Greene, David and Keiko Hergesheimer, Deborah Shaw and Sherry Beam. The 12-member group will start small by making educational signage for the gorge and lead some guided hikes, and then plans to attain official nonprofit status and begin fundraising. Members also hope to get more people involved in a letter-writing campaign to get city, village and township leaders, businesses and citizens to write to their legislators in support of the tax check-off ammendment. Letters can also be sent to the Ohio Department of Natural Resources, Division of Natural Areas and Preserves, 2045 Morse Road, Building C-2, Columbus, Ohio 43229-6693.

“This is our gorge, and we want to protect it,” McNelly said.

Those interested in getting involved with the Friends of Clifton Gorge can reach McNelly at 414-6691.