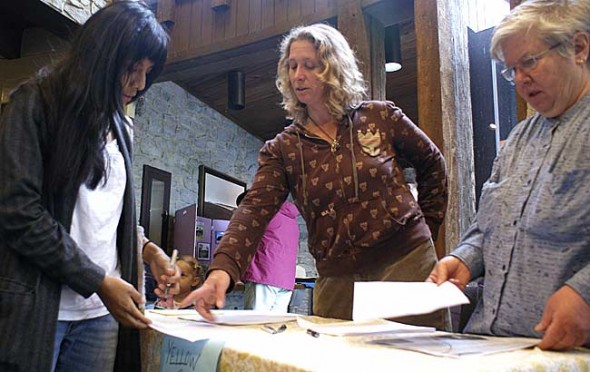 TimeBank is timely in economy

Daily life in Yellow Springs is filled with people buying and selling at downtown businesses, while behind the scenes an informal network of exchange looms large throughout the community. A villager gives an elderly woman a ride to the doctor’s office. Another helps her neighbor weed his garden. From free child care to yard work, dog walking to free music lessons, each day villagers help meet each others’ needs.

As village resident Laurie Dreamspinner sees it, this “invisible economy” of neighbors caring for each other without financial compensation needs to be formalized again in Yellow Springs by bringing back the practice of TimeBanking, a system of reciprocal exchange where payment for services is in “time dollars” rather than U.S. dollars.

“We need to acknowledge everyone’s work,” she said. “We need to dignify it with a name.”

Dreamspinner, who coordinated a short-lived Yellow Springs TimeBank in the mid-1990s, has been working to revive TimeBanking in response to the current financial and credit crisis.

“In times of enormous economical upheaval, like now, it’s a way people can actually contribute to the community and take care of their family’s needs,” she said.

With a resolution of support from Council, the Yellow Springs TimeBank is now moving forward. Ava Miri Nasoff, Dreamspinner’s co-organizer, said the next step is to buy and get training in the computer software needed to run a TimeBank. Nasoff plans to attend a TimeBanking training workshop in Michigan in June. The two organizers are also conducting surveys on the services local residents would provide to the system. Survey forms can be filled out at the downtown stores Pass It On Kids, which Nasoff owns, and Eco-Mental.

Part alternative currency and part community service model, TimeBanking works like this: members of the TimeBank list services they are willing to offer in an online directory. By doing something for another member, they earn credits denominated in hour-long increments. They can then use these credits to draw on the services of another member. All exchanges occur without money, other than a small annual membership fee to cover administrative costs.

TimeBanks facilitate a wide variety of exchanges among their members, including home repair, meal preparation, event planning, tutoring, help with taxes, computer support, language translation, cleaning, arts instruction, counseling, rides to the airport and more. With members determining the services provided, each of the 50 operating TimeBanks in the U.S. TimeBank organization is unique.

“People come up with new ways they can use it — it’s not limited to what the designers can come up with,” Dreamspinner said.

By allowing people to exchange their time rather than cash, TimeBanks save their members money as well as give them access to services they can’t always afford, Nasoff said. And sometimes they even offer services that can be hard to get in the conventional economy, she said, such as rides and housework.

The system also builds relationships across intergenerational lines and boosts self-esteem, according to Nasoff, whose business, Pass It On Kids, is a consignment shop that often uses the alternate currency of store credit. That an hour of someone’s time is always equal to another’s is an important feature of the TimeBank system, Nasoff said.

“It gives everyone an opportunity to be useful and valued,” she said.

From December 1993 to March 1995 the Yellow Springs TimeBank operated with 100 participants from all age groups. What started out as four available services mushroomed to 28 in its first year. During the calendar year 1994 more than 2,000 service hours were exchanged, Dreamspinner said.

The main advantage was that villagers, as part of a network, could more easily access services they needed, Dreamspinner explained.

“Before you’d have to find someone who could help you with a specific task,” she said. TimeBank members most frequently requested transportation and child care services.

Unfortunately, Dreamspinner said, the Yellow Springs TimeBank was discontinued because at the time there wasn’t money to pay her for her work as part-time coordinator, a critical position that arranges and records service transactions.

“People were upset that it ended,” she said, adding that the new TimeBank will be structured with a roving volunteer coordinator position to be sustainable.

Yellow Springs’ experience with alternative monetary systems goes back much earlier, to at least the 1930s. It was then that Arthur Morgan, while president of Antioch College, pioneered the Yellow Springs Exchange, a complementary currency that “helped people exchange what they have for what they want,” according to an announcement of the exchange. “If such things as these can be done among ourselves without the use of legal money, we may get many of the things done that we cannot seem to afford now,” according to the announcement.

While the Yellow Springs Exchange flourished in the cash-strapped Great Depression, modern-day TimeBanking was started in the U.S. during the recession of the early 1980s because of diminishing funds for social programs. Lawyer and social inventor Edgar Cahn, who had previously co-founded the Antioch College of Law in Washington, D.C., then a branch of Antioch University, designed the system “to validate and reward the work of the disenfranchised in rebuilding their communities and fighting for social justice,” according to the timebanks.org Web site. Since then TimeBanks have spread to more than 24 countries.

Last December Village Council’s Human Relations Commission requested that Council use $1,500 originally allocated to develop a database of the village’s human resources to provide seed funding for the TimeBanking project, which would have included database software and training.

Council passed a resolution supporting the project, but denied funding it due to unclear tax implications and possible adverse impact on volunteerism. Dreamspinner, however, contended that local volunteerism would not be undermined by an expectation of getting something in return but actually would help to keep the flow of volunteerism going.

Nasoff said she views TimeBanking as a powerful alternative economic system for the community.

“As the traditional monetary system is being recognized as a system that doesn’t work, it’s a way of building on the preexisting threads and giving people credit for the work they’re already doing,” she said.