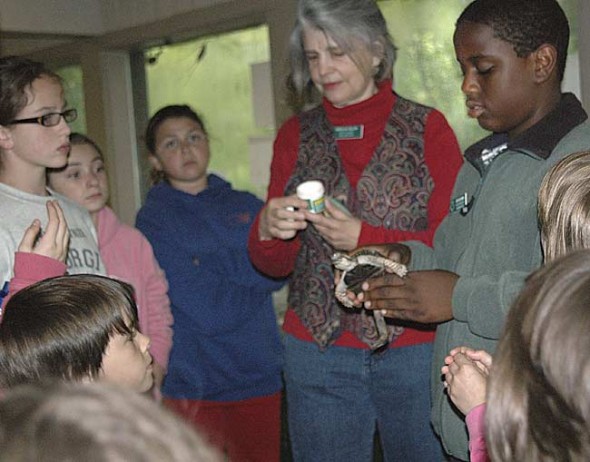 Gently holding Amos before a group of area church youth who stopped by Trailside unexpectedly on Saturday, Joe Plumer explained what Glen Helen’s box turtle likes to eat and how to bathe him in warm water. Plumer has helped pioneer a new program at the Glen utilizing youth and an adult mentor as docents for the Glen. Volunteer Deborah Dillon, holding vitamins for Amos, has worked with Plumer for two years. (photo by Lauren Heaton)

Youth give back to their Glen Helen 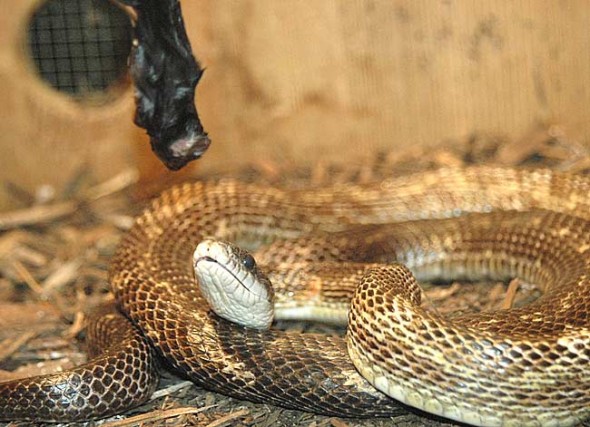 Glen Helen volunteer Deborah Dillon didn’t much care for snakes when she started welcoming visitors at Trailside Museum five years ago. But then Joe Plumer, who was 9 at the time and passionate about amphibians, opened her eyes to the fascinating lives that snakes of all kinds lead. From the white oval eggs they lay to the fishy smell of their recently shed skins, Dillon found that the more she learned with Plumer, the more she wanted to know about the animals she had developed a newfound respect for. And Plumer was just as enthusiastic.

“I started here because I love snakes, and I knew they had one here,” he said in an interview on Saturday. “It was my idea, and the more I’ve come here, the more I’ve been searching for snakes everywhere.”

Piloting his own role as one of the Glen’s youngest naturalists, Plumer has been helping the Glen and educating himself as a leader for two years already. He’s done everything, including taking care of the animals and displays at Trailside, washing both cages and dishes, training to lead wildflower and bird hikes, and familiarizing visitors to Trailside as an interpretive center for all that the Glen has to offer.

He was at Trailside during Saturday’s annual Glen bird count when a group of 25 church youth filed in for an unexpected romp through the preserve. It happened to be the bimonthly feeding event for Pepper, Trailside’s black rat snake, and Plumer immediately got to work telling the visitors about Pepper and her habits as he fished a black mouse out of its defrosting dish and dangled lunch under Pepper’s nose. The kids crowded in with rapt attention as Pepper flicked out her forked tongue, snapped onto the mouse’s head and choked it down over a few short minutes. Plumer told the wide-eyed onlookers about his own corn snake named Piper and the Russian tortoise named Darwin that he takes care of at home.

The experience Plumer has had and the interest he has brought to the Glen is something the preserve would like to encourage with its recent initiative to partner youth with adults as docents in the Glen. Kids and their parents or an adult mentor with an interest in birds, insects, fish or nature in general are invited to come learn about the Glen and then give back by sharing those interests with others who visit the preserve, Glen Project Manager Jenny Montgomery said.

Yellow Springs residents Chasilee Crawford and her 11-year-old son Jeffery volunteered for the new program as part of Jeffery’s sixth-grade homeschooling curriculum. They have attended the training hikes and orientation sessions this spring and, following Jeffery’s interest in geology and fossils, are considering developing a deeper knowledge of the geological history of the Glen to share with other visitors. The mother-son pair have visited the Glen often in the past, but are now learning about it on a deeper level and connecting that knowledge of the land with their Native American heritage.

“Jeffery’s very interested in wildlife conservation, and has gotten very excited about learning about his heritage — about respecting the earth and your surroundings,” Chasilee Crawford said this week. “It’s made us want to get back to the Glen.”

Four other parent-child teams from Yellow Springs and the surrounding area have started training with the program, as well as a handful of other adult volunteers who have a particular vocational or academic interest in an aspect of the Glen and are eager to share with others by leading hikes or greeting people at the Trailside entrance.

The Glen enjoys the support of a core of regular volunteers and hundreds of episodic volunteers who help with everything from staffing the nature shop and clearing garlic mustard to reshingling or repainting a building. But it’s not just volunteers who make the Glen function.

This spring two part-time rangers will staff the Glen from noon to 6 p.m. on Saturdays and Sundays, when the parking lot off of State Route 343 will be opened at a charge of $3 for Glen Helen Association members, $5 for nonmembers. The rangers, local resident David Meister, who has worked in resource management on public lands out West, and Fairborn resident Matt Myers, who is starting a career as a peace officer, will share duties, with one at the State Route 343 parking lot and the other out on the trails answering questions and educating visitors about the rules that protect the Glen.

Still the Glen depends heavily on its dedicated volunteers to remain a viable and healthy organization, Montgomery said. The adult-child volunteer pairs will be one additional way that those who love the Glen can help others connect to it, Montgomery said. It is an opportunity for adults and kids to interact in a place that is special to them in a way that allows them to take ownership and responsibility for the Glen.

“The big thing is we’re open to people bringing their own ideas for this common, shared interest that is the Glen,” she said. “It’s exciting to have this gateway for future possibilities.”