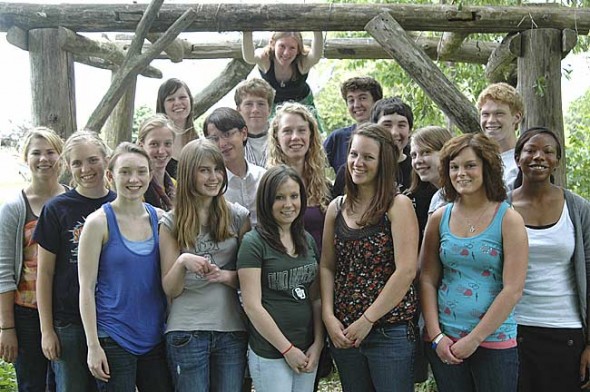 As is the tradition in May of every year, Yellow Springs High School recognized many of its students, especially its seniors, at the annual National Honor Society scholarship awards ceremony. Held on Wednesday, May 19, the chief bestower of honors was himself recognized for his 30 years of service in almost every leadership capacity at YSHS and McKinney School.

Independent Order of Odd Fellows with the Friendship Rebekah Lodge gave scholarships/stipends of $750 to Salome Garcia, Christopher Dorn and Birch Robinson-Hubbuch. The Odd Fellows awards for $250 went to Megan Miller, Alexis Onfroy and Belle-Pilar Fleming.
Other local and memorial gifts awarded were the Martha Cadow scholarship that went to Ryan Phillips, and the Mary Jane Bachtell award, given to senior Shirlisa Scott and junior Kelsey Cundiff. The JohnMcConville Memorial Scholarship of $1,000 went to Nancy Epling. The Howard Kahoe/Dud Scott Memorial scholarship of $500 went to Christopher Dorn. Two James A. McKee Scholarships went to Matthew Rowe and Shirlisa Scott, the Bent scholarship for $2,000 went to Salome Garcia, and the Foos Scholarship of $3,600 went to John Michael Malone.

The school also announced its regional scholarship award winners. The American Association of University Women scholarship of $200 was awarded to Marlee Layh, and the Greene County youth activity fund award went to Shelley Murphy. The GEM scholarships of $1,000 each went to Shirlisa Scott and Birch Robinson-Hubbuch.