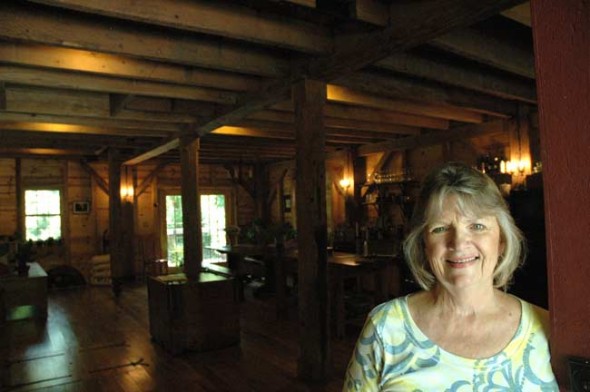 Inn keeper Donna McGovern has been hosting more guests each year at the historic Grinnell Mill Bed & Breakfast since the restoration of the mill was completed in 2007. (photo by Lauren Heaton)

Spend a night in an historic grain mill

Back in 2004, the Miami Township Trustees envisioned the ideal way to save the historic but decrepit Grinnell Mill. They hoped to restore it to its original design and use it as a bed and breakfast that could serve locals as well as attract visitors from afar. The vision wasn’t far off.

After an extensive four-year renovation managed by local resident Jim Hammond and completed in 2007, the mill has been open to visitors who have come from all over the country to see the homage to America’s milling history and visit Yellow Springs while they’re at it. According to Township Trustee Chris Mucher, the first year of operation, the mill was used for 50 overnight rentals. The following year 75 to 90 guests stayed overnight, and last year the mill attracted 150 guests who used it as a bed and breakfast. The daily rentals have increased as well, and those who come seem very pleased with their choice.

“It is a touch of heaven here,” Chris and John McKenzie wrote in the mill’s guest book in 2007. The following year Rick and Beth Horley wrote, “The craftsmanship in the reconstruction of the mill is superb. It is a wonderful recreation of an era long passed.”

Inn keeper Donna McGovern lives at the mill and runs the bed and breakfast, replete with homemade French toast and Flying Mouse Farm maple syrup in the mornings. She keeps the mill open 20 hours a week in the spring and summer (10 hours in the colder months) to greet visitors who stop in to see the giant millstones on display and check out the pulleys and chutes that once took the grain to the third floor for storage and sent it out the high door for buyers.

“I get a lot of enjoyment out of making people happy when they stay here,” she said this week.

The original mill was built around 1812 and then reconstructed in 1832. Frank Grinnell purchased it in 1862 and used it as a gristmill, a saw mill and a limestone crusher. It operated until 1937, after which Antioch College purchased it as part of Glen Helen. Since 1982 the mill has been part of a National Historic District as an example of America’s 19th century milling heritage.

The Township trustees acquired the property from the college in 2004, and Hammond set to work restoring the 30-foot post and beam frame and replacing nearly all the siding, insulation and roof to their original dimensions and character. Local resident Todd van Lehn completed the excavation and fill. The trustees then established a nonprofit trio to oversee the mill with one representative from the Township board of trustees, the Glen Helen Ecology Institute and the Yellow Springs Historical Society. A management committee of Hammond and his mother Jackie Hammond, Dan and Libby Rudolf, and Scott and Pam Geisel, manage the operations.

“It’s a success story,” Mucher said. “As of today, it’s really working the way we had meant it to be from the inception. And so far, everyone who’s seen it loves it, and they’re impressed with what it was and what it has become.”