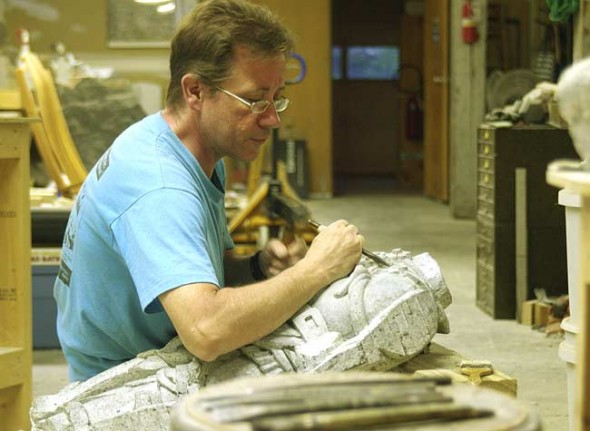 Michel Zurbuchen is shown carving in his studio, Sculptor’s Emporium, which is located in Millworks. Zurbuchen offers classes to those interested in learning the art of stone carving, which he says is not that difficult. (Photo by Sehvilla Mann)

An ancient art lives on in YS

At his booth at the June Street Fair, Michel Zurbuchen hopes to get people hooked on stone carving.

Each year he sets out two benches with a stone at each, plus tools and safety glasses, and encourages all who are interested to try carving for themselves. People who had never considered taking a hammer and chisel to rock find they don’t want to stop.

If a visitor to the booth is bitten by the “stone carving bug,” then Zurbuchen suggests they consider taking the class he teaches at his studio, the Sculptor’s Emporium, in the north end of the Millworks off of Walnut Street. With just one small sign that faces the bike trail, it’s inconspicuous from the outside. Inside, though, the Emporium is a lively creative work space.

There are workbenches, shelves and desks; stands for carving; rough stones, finished sculptures and those in various stages in-between in the carving area; and tools ranging from hand chisels in neat rows to a pneumatic hammer with a huge compressor that lurks in the northwest corner.

Stone carving is a less common offering among art classes, both in academic and recreational settings, a fact Zurbuchen regrets.

“It’s becoming one of the lost arts,” he said in a recent interview. “Until recently it was not required for any student majoring in art at any university in the U.S.”

Instead, students receive instruction in art genres that give a more immediate result. Yet, Zurbuchen says, the art of carving stone has served a vital role throughout human history. Stone carving dates back to the first formation of tools.

“When it becomes that ingrained in human society, it seems imperative to keep it alive. I think it’s vital to society,” he said.

The art is also more accessible than people may think.

“The carving process itself, anyone can learn. The most difficult part is choosing what you want to carve,” he said. Zurbuchen welcomes beginners and holds his classes three hours a week for eight weeks, weekday evenings and afternoons so they are accessible to those who work during the day.

Zurbuchen is in his element when he’s sculpting stone. Though he has worked in other media, he said, “with drawing or photography, I don’t think about it when I’m away from it. Stone, when I’m immersed in a piece of work, I eat, sleep, drink, think stone.”

He recalls a time when he worked on a sculpture continuously for 48 hours. Conversely, he sometimes works on the same piece for months or even years.

“If I didn’t have the passion for it I wouldn’t be able to sustain it for years,” he said.

He usually favors the abstract style when working on his own pieces.

“You take the concept of an idea and develop it from the medium, in this case stone. But it’s not figurative,” he said. It’s different, he said, from free form sculpture, in which “you’re more or less going along with whichever way whim takes you.”

“[Abstract sculpture] really allows me to express myself without boxing in the viewer’s interpretation,” he said.

Zurbuchen doesn’t generally exhibit his work; he notes that there is difficulty and a certain risk to moving sculptures around. He does sometimes sell original sculptures, but is wary of putting too heavy an emphasis on the commercial aspect. “I work in stone really for myself,” he said. “I find that working through a market becomes deleterious to the process of creating pieces.” He encourages his students to take note of this as well.

Zurbuchen grew up in Yellow Springs, attending the Antioch School, Yellow Springs High School and Antioch College, from which he graduated with a bachelors in art in 1981. In 1983 he moved to Florida, taking a job with Montoya Sculpture and Supply in West Palm Beach.

“I’ve always been involved in art in one way or another; what I didn’t learn at the time [before working at Montoya] was that my real passion was stone,” he said.

In his 10 years there he learned many of the skills he still uses, “not just direct work” but the art of creating portraits, finishing, enlarging and reducing pieces. He also became a skilled stonecutter.

“I learned a lot more about stone through cutting stone,” he said.

With the artistic training and business knowledge he acquired at Montoya, Zurbuchen returned to Yellow Springs in 1996 and opened the Sculptor’s Emporium the following year. At the time, he said, the University of Dayton, Wright State University and Antioch College had all just created stone carving classes. This would create local interest, and therefore a need for further instruction, since academic classes would not be accessible or suitable to everyone.

Today the Sculptor’s Emporium is part business, part classroom and part artist’s work space. Zurbuchen sells sculpting supplies, including tools and stones from a variety of quarries, mostly American, with which Zurbuchen has cultivated relationships.

He also takes commissions “as often as I can,” though demand has slowed somewhat since the onset of the recession. When a potential client approaches him, “Sometimes it’s bang-on, their concept; sometimes we go back and forth until everyone’s in agreement.”

Teaching stone carving is an essential aspect of Zurbuchen’s work. He offers an eight-week course, three hours a week, with open enrollment. Students can begin their study any time, and they don’t have to attend in consecutive weeks, though Zurbuchen said regular attendance helps with continuity. His current clientele is largely recreational, and he has students of all levels.

“Most are new to stonecutting” initially, he said, though many have previously pursued other forms of fine art.

Students are not limited to the initial class time. “Many return after eight weeks and I like that,” he said.

Diane Remmers, a retired Montessori teacher from Beavercreek, has been studying with Zurbuchen for about seven years. She initially contacted him with an interest in bronze pouring.

“I came to see what kinds of things he had, we got to talking about stone, I tried it and I got hooked,” she said. She has been taking classes at the Emporium ever since, arriving once a week to work on a piece for up to a year.

Paul Fortman of Dayton, a software developer by profession and another longtime student of Zurbuchen’s (he’s been studying with him since 1998), was also carving on a recent evening. His other artistic pursuits have included drawing, clay and wood sculpture. He now shows a piece in the University of Dayton alumni exhibit each year, and also exhibits at the Street Fair.

The sculpture he’s revising “is not really supposed to look like anything,” Fortman said, but “it is interesting to see what other people see in it.” The piece features several slender arcs of stone that twist and curve upwards from the base towards each other, giving the piece a sense of motion.

“I’m trying to capture more of that movement,” said Fortman.

With the June Street Fair coming up, Zurbuchen invites anyone interested in his work or the Sculptor’s Emporium to stop by his booth. Of course, anyone who does stop might be invited to take chisel to rock. If they do that, they might find they don’t want to stop, in which case Zurbuchen can help them out.