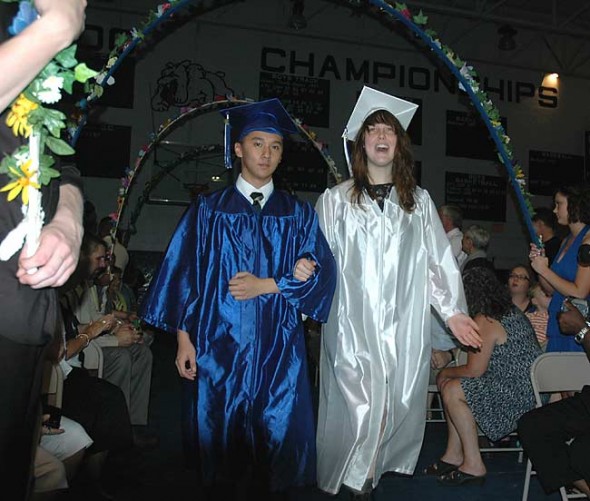 Kalson Cheow and Anna Carlson processed with the YSHS graduating class of 2010 on Thursday, June 3, in coincidence with the 30-year retirement of Principal John Gudgel, who gave the commencement address. Much ado was made of both. (photo by Lauren Heaton)

Class of 2010 encouraged to seek lives of value

Presiding over his last Yellow Springs High School commencement, Principal John Gudgel congratulated the 56 members of the class of 2010 on their graduation day. The class made fond and frequent reference to their senior trip to New Orleans and their corresponding class motto, “Laissez les bons temps roulez!” They were serenaded by senior Molly Turner and younger school mates William Fenimore, Lenaya Leeds and Rory Papania, who sang “Smile” by Charlie Chaplin, and they gave a standing ovation to their beloved “Gudge.”

Gudgel gave the commencement address, talking about the differences between his time as a student in the 1970s and today, including eight-track tapes instead of CD’s and transistor radios instead of iPODS, while acknowledging their common affinity for questioning authority and tardiness. He urged the community to maintain a commitment to a diverse school body. And he urged the students, in the words of Albert Einstein, to strive not to be a success but rather to be of value.