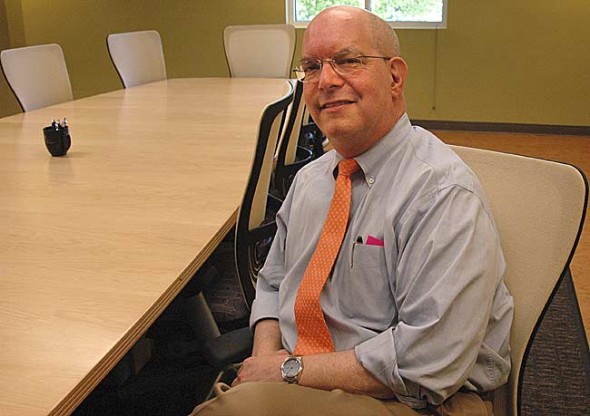 On the job for almost a year, Antioch University McGregor President Michael Fishbein has found that his new position has offered “both a wonderful learning experience and a sense of good challenge.”

Fishbein will be officially inaugurated on Saturday, June 12, from 1 to 3 p.m. in the PNC Auditorium at the McGregor campus on Dayton Street. While the inauguration is by invitation, community members are also welcome, and if there’s an overflow crowd, people may watch the ceremony streamed live in classrooms B106 and B220. A reception will follow the ceremony at around 2 p.m. in the YSI Foundation Multipurpose Room.

Space is tight that day at McGregor since the school’s Saturday classes will be in session along with the inauguration. However, according to McGregor Chief of Staff Deena Kent-Hummel, “We’ll do our best to accommodate anyone who shows up.”

Building a positive relationship with the Yellow Springs community has been one of Fishbein’s priorities since he came to the job last summer, he said in a recent interview. Aware that some villagers felt negatively about McGregor around the issues of the new building and the closure of Antioch College, Fishbein wants to mend fences.

“I know the past several years were difficult and some saw us as partisan,” he said. “But now that I’m here, I want to write a new chapter.”

Toward that end, Fishbein, who replaced former President Barbara Gellman-Danley, took part in the recent local visioning effort, and encouraged McGregor faculty and staff to do the same. He also joined the board of Community Resources. And he extends an invitation to the community to consider McGregor as a host to local events.

Reaching out to the community also includes reaching out to Antioch College, which became independent from Antioch University last September. Fishbein has spoken with Antioch College Interim President Matthew Derr about the possibility of the two educational institutions working together, he said.

“I’ve made clear that when the college is ready, we’re open to a range of conversations regarding what we can do together,” Fishbein said. “I’ve worked hard to make sure that channel of communication is wide and deep.”

The “good challenge” of being the McGregor president is linked to how his job differs from his previous position, as provost at Daniel Webster College in New Hampshire. In that job, he said, he was only responsible for keeping things running smoothly, whereas at McGregor, he’s the one who needs to think strategically and with a long view.

“Now I need to wake each day thinking about issues that we need to address two, three or 10 years out,” he said. “As sobering as it’s been, it’s also fun. When you get a chance to think about things you haven’t thought of before, it’s an exciting adventure.”

For his first five months, Fishbein focused on creating a strategic plan that broadened McGregor’s program offerings. Currently, the school is in the final stage of approval for a new program offering a doctorate in education, and is also in the process of getting state approval for a new undergraduate degree in sustainability. (See the article “McGregor eyes green degree” on the front page.)

In earlier stages of development is a new graduate degree in health care advocacy, a field that Fishbein believes will only grow with new changes regarding health care reform. Currently, there are few schools nationwide that offer this degree, and Fishbein is proud to be in the forefront of this effort.

In another new initiative, McGregor is exploring offering classes for an undergraduate degree completion program between the hours of 10 a.m. and 2 p.m. weekdays. Currently, the McGregor undergraduate degree completion program is only offered on Saturday, and the school’s graduate education classes are only at night. The new class times are aimed at attracting the families of the 27,000 people who work at Wright Patterson Air Force base, giving parents the option of attending class while their children are in school.

As well as the challenge of strategic thinking, Fishbein has found himself occasionally challenged by the McGregor community in terms of his management style.

“While I like to believe that I’m open and collaborative, I’ve had to stretch,” he said. “This is a community of faculty and staff that wants someone who will listen and consult them on day-to-day operations, and it’s not always possible to do that.”

While he values listening to the input of others, being a leader also means making decisions, even unpopular ones, he said.

Overall, “collaboration doesn’t always mean doing what others want. It means hearing them out, trying to understand, and then having to make tough decisions,” he said.

One example of a challenging issue in his first year has been his proposal to change the school’s name, Fishbein said.

“There are always some bumps in the road” when engaging with a new faculty and academic community, he said, and “one of those bumps” has been the discussion of a possible name change.

In his first year Fishbein has advocated a more open and transparent budget process, compared to the previous, more top-down process. While this change is still in the initial stages, he’s hopeful that all segments of the McGregor community will be taking part in shaping the budget in coming years. There are two main reasons why transparency regarding the budget appeals to him, Fishbein said.

“First, there are very intelligent, knowledgeable people” at McGregor, and their contributions would strengthen the process, he said. And, “in tough economic times when you can’t give everyone what they want, the more involved people are, the more comfortable they’ll be with the results.”

And the results in his first year have been positive. While McGregor, like many private institutions, suffered a decline in enrollment during the initial year of the economic downturn while lower-priced community colleges prospered, the drop appears now to have been temporary, Fishbein said.

“We met and exceeded our enrollment goals this year,” he said.

Overall, after a year in his new professional home, Fishbein is grateful to be working with “an incredibly talented bunch of people who are dedicated to our mission,” he said.

And he also wants villagers to not be strangers.

“We intend to be a friendly neighbor to Yellow Springs,” he said. “Come on out and see what we’re doing.”