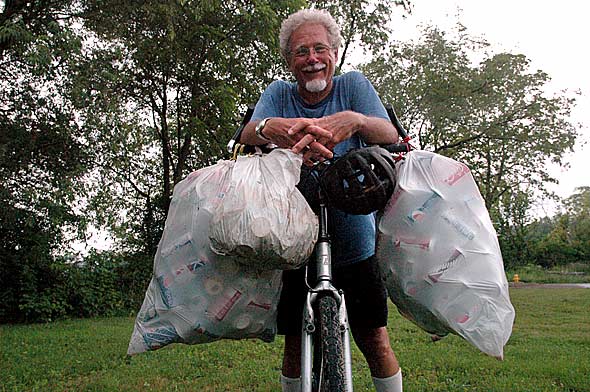 The ‘can man’ recycles as ‘homage to Mother Nature’

While a high school Latin teacher in Cincinnati, Michael Kraus couldn’t stand to watch students throw their soda cans in the trash. So he spent his afternoons digging through garbage bins to retrieve and recycle them. Now, retired and living in Yellow Springs, Kraus rides 200 miles per week on the Little Miami Bike Trail, recycling cans littered on the ground or slated for the landfill.

“It takes 10 times as much energy to make an aluminum can from scratch than from a recycled can,” said Kraus, who taught European History at Antioch College for 20 years. “That’s a terrible waste.”

For the last 10 years, from April to October, the 72-year-old Kraus has averaged three bicycle trips per week of 60 to 70 miles. Leaving at dawn, Kraus returns in the early evening with several can-filled garbage bags balanced on his handlebars.

After emptying, cleaning and crushing the cans, he fills his Honda Insight to the brim and drives them to a recycling center in Dayton. Last week, his 151-pound booty yielded around $90. Kraus donates the several hundred dollars he makes each season to single mothers in town.

Kraus started donating the money to good causes after splurging an initial $230 in recycling profits from his first year picking through the garbage at McNicholas High School in Cincinnati on a fancy lunch. He treated the three students who helped him, thinking it would be nice to reward them for such a “distasteful task,” yet later felt guilty for spending the money on such a luxury.

With profit not the motive, Kraus is driven by a mixture of aesthetic, economic and environmental concerns.

“This is my homage to Mother Nature,” he said.  “She provides me with fresh air and scenery and I pick up litter.” Kraus aims to leave the garbage bins he rummages through neater than he found them, as well as the woods and weeds surrounding the bike path clear of aluminum can trash.

“I think I made the students more aware of the need to recycle — that was my purpose,” Kraus said. “I didn’t preach — it was the power of example which is why I continued.” The recycling Kraus started at McNicholas continues today, with recycling bins available in each classroom.

“Part of living in Yellow Springs for half a century is you develop an awareness of the need to tread more softly on the earth,” he said.

The Baltimore native has learned where to find the greatest concentration of discarded cans along the bike path — from a tree swing along the Little Miami River around which dozens of empty beer cans are littered in the summer, to a trash can at a Xenia auto racetrack.

Kraus once calculated that his diligent rummaging earns him a modest 70 cents per hour for his labor. But the non-monetary returns are plentiful. Besides doing his part for society, getting his exercise and taking in the natural world on the extended bike trips, Kraus is teaching others about recycling.

“I get a lot of stares — sometimes they applaud, sometimes they look askance,” he said. “The people who see me who think recycling is a good idea, they say ‘thank you.’”