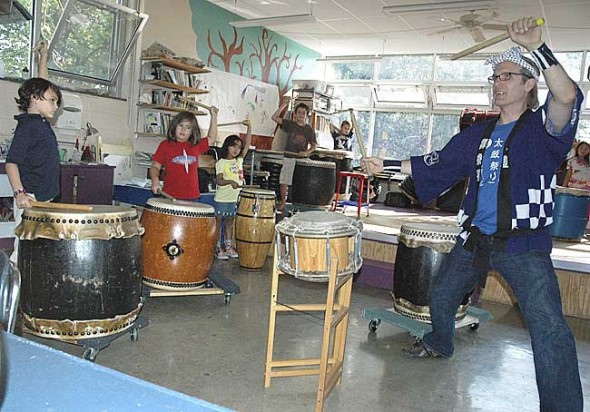 Columbus performer and educator Eric “The Fish” Paton has been teaching Antioch School students the art of Japanese taiko drumming during an arts residency that ends this Friday, with a performance at the school. He’s shown here with students from the school’s Younger Group, including, in the foreground, Kai Maruyama, left, and Zenya Miyazaki, center. The residency was funded by the school’s Emily Baily Fund. (Diane Chiddister)

“There’s this sense of personal expression that’s possible,” Paton said in a recent interview, comparing introducing drums to a group of children with introducing oboes, a process that would take considerably longer. “Everyone can find their voice quickly.”

Paton should know. As an artist with the Greater Columbus Arts Council Artists in Schools program, he’s conducted more than a thousand workshops that bring kids and drums together. For the past several weeks, he’s been doing so during an arts residency at the Antioch School, with a focus on the Japanese art of taiko drumming. The residency, which is funded by the school’s Emily Bailey Fund, ends this Friday, when children will perform for the school community.

As the children practiced for their performance last Friday, the school’s art/science room exploded with sound and energy.

“I call, you answer,” Paton called out at the beginning of each new piece to a group of Younger Group students, who were standing beside drums nearly as big as they were. “Have your sticks poised and ready.”

Wearing a kimono over his clothes, Paton then drummed out a rhythm, the children responded, and back and forth it went, each round growing more robust than the last. He began each piece with Japanese chanting, which he taught to the children, and ended it with a low bow, after which the children bowed, too.

“When we play as a group, it generates a sense of community,” he said.

During a break, Paton asked the children if they had questions about Japan, where he spent his growing-up years. While they didn’t have questions at that moment, several were pleased to announce their own Japanese credentials.

The Antioch School is much more culturally diverse than most schools he visits, Paton said later.

“I see a student body that brings more cultural backgrounds to the table. The children are very open about sharing their backgrounds,” he said.

Past students have told him that taiko drumming creates an elevated mood, releases anger and helps them achieve a sense of being transported.

While the Antioch School children didn’t describe their experience in such sophisticated language, they were unanimous in their enthusiasm for the art.

“I like it because my whole body vibrates,” Eliana Ling said.

Amelie Maruyama loved the sound of the wooden sticks on the sides of the drums, and Selah Griffin liked “how we all got to wear Japanese coats.”

“I like the noise and the rhythm,” said Lida Boutis.

The praise was reciprocal. Paton, a longtime percussionist in the Columbus arts scene, was also pleased to return to the Antioch School, where he last gave a residency in 2001.

“It’s nice to come back to a school that has a family atmosphere,” he said. “Part of that’s due to the size and part to the way students and teachers interact, with lots of trust and respect. It’s a special place.”