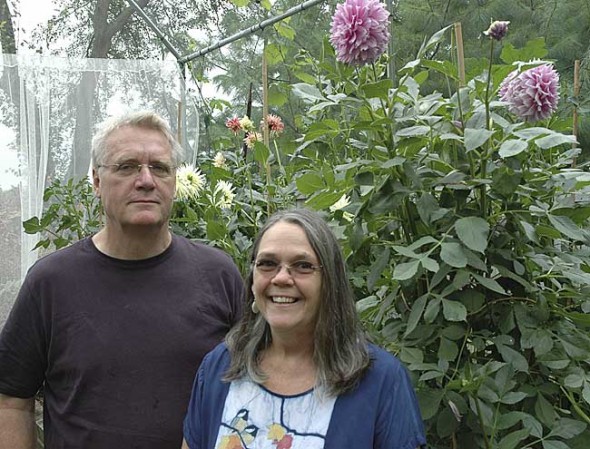 September is the height of dahlia season, and several growers in the village are feasting their eyes on their long-awaited prizes, which come in more varieties and colors than the average eye can appreciate. (photo by Lauren Heaton)

Spring may be most flowers’ idea of a good time, but for those meticulously cultivated, brilliantly colored, dinner-plate-sized darlings known as dahlias, late August to mid-September is when the real party starts. And dahlias know how to have a good time.

In gardens around town this month, dahlias are bursting out in perfectly symmetrical balls of peach and cream, lily pads of soothing lilac, and red and yellow masses with Chihuly-like tentacles. They are a grower’s dream, a cultivator’s challenge, and an enthusiast’s joy to see, most publicly at Thursday and Saturday farmers markets. And the feeling is contagious.

“There’s nothing better than seeing a shopper passing from stall to stall and all of sudden their eyes alight on the dahlias, and they just grin and ask, ‘Are they real?’” local grower Dinah Anderson said in a recent interview.

Enthusiasts such as Anderson, who moved to her Orton Road home after being away from the village for several years, grow dahlias because they adore the way they look. She first became enamored with the tuber flowers while living in North Carolina in 1983, when a friend returned from a Cleveland flower show with a bunch.

“I saw them and about died,” Anderson said.

Though her mother had grown roses, and she and her husband, David, had a garden with the ubiquitous “baseball bat zucchinis,” Anderson didn’t think of herself as an avid gardener. But she couldn’t not be an avid dahlia lover, and from then on, she devoted much of the free time outside her social work career learning how to grow dahlias.

In this endeavor Anderson is not alone. She is one of thousands of dahlia devotees around the country who share information through the American Dahlia Society, whose early Web site host was local Internet service provider Bruce Cornett. Cornett, who operates the Internet company Servlet at his home on Xenia Avenue, caught the dahlia bug 30 years ago from a neighbor named John Peck, he recounted in a recent interview. The Peck family had operated the Golden Rule Dahlia Farm, one of Ohio’s first, on a farm in Warren County since the 1920s. Cornett found that he and Peck “had a common interest in growing things,” he said, most notably, dahlias. “I spent a year as an apprentice, and I got good at it.”

It was some years later, after Cornett and his wife Carol Cornett had moved to Yellow Springs and operated Carol’s Kitchen and then the Green Grocer through the 1980s, that they decided to return to dahlias. They adopted the Golden Rule Dahlia Farm from Peck and began cultivating tubers on less than an acre of land in their back yard. They marketed to exhibition growers, serious competitors who want to know the color, form and size of the flowers they’ll get before they even begin to plant, and they developed enough innovative storage and propagation techniques to satisfy many a blue-ribbon customer around the country.

Local resident Michael Jones grows dahlias at his pottery studio at Millworks. He was introduced to them by the Cornetts, when his studio was located near their flower farm on Xenia Avenue. He is happy with the output of the hearty plants, which put out new blooms each week as long as they’re clipped regularly.

“A decent patch can keep you in flowers from mid-August onward until the first good frost,” he said.

Dahlias, though, are sometimes more work than Jones has time for. They need to be clipped, and the roots must be dug up at the beginning of winter. And then there’s the fertilizer, which for Jones’ patch came from horses who had been munching on morning glories. He still hasn’t had time to properly weed out the scads of morning glories that threaten to take over the flower bed.

“Dahlias are a flower that if you can tend to them regularly, they respond. But if you try to leave them alone, they take it personally,” he said. “Every year there’s a period where I test their survival capabilities.”

With dahlias around, one hardly needs any other kind of flower at all. Except they are missing one aspect of a flower that is somewhat intrinsic to the phylum. Dahlias, at least the lookers grown in this area, have no smell. They have been so intensely bred for shape and color that the smell has left them altogether. That aside is of little consequence to Anderson.

“It’s the colors that just knock your socks off — they are so gorgeous they don’t need smell!” she said. “It would be degilding the lily — or the dahlia.”

The Cornetts have continued to operate Golden Rule at their home and are known around the country as a reliable source of authentic breeds. One of Martha Stewart’s magazine issues listed the farm as one of 20 small exhibition growers in the country, and the couple has cultivated many varieties, among which is the white and fuschia wildly laciniated Patricia Dawn, named after their daughter, Patty. Over the past decade they have prioritized Servlet and Carol’s career at Wright State University as a professor of English as a second language, but they have maintained distribution to select growers. And they plan to reinvigorate the business again in the spring, they said last week.

This past spring they cloned about 3,000 new dahlias, each of which, by next summer, could propagate 200–300 plants.

“We’re edging our way back into the business,” Bruce Cornett said. As serious as the Cornetts can be about dahlias, they, too, got into it because of an aesthetic attraction to a living thing of beauty. They always have extra dahlias, especially at the current height of the season, and they give them away to Friends Care Community, the post office, the banks, and most recently to beautify the Glen Helen pancake breakfast fundraiser.

As the home of such dahlia enthusiasts, a friend of Anderson’s suggested that the village adopt the dahlia as the Yellow Springs flower.

“Now that’s something I could get behind!” Anderson said.