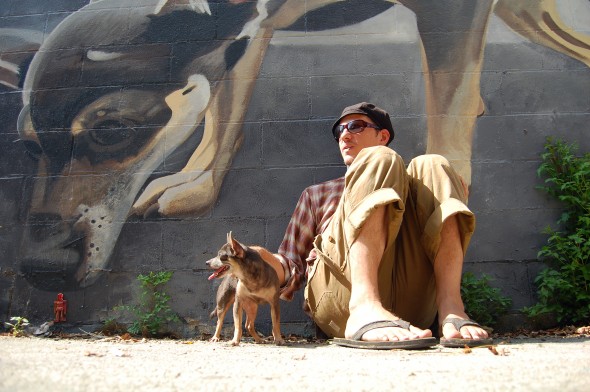 Pierre Nagley, and his companion, Beetoe relax under the dog's likeness in Keith's Alley (photo by Aaron Zaremsky)

The murals in Kieth’s Alley are Yellow Springs’ best-kept secret. If the average weekend tourist was a little more curious, they could see some real art right behind the stores they shop in. The locals who are familiar with the murals are lucky. They have a lifetime pass to a beautiful, ever-changing gallery.

Pierre Nagley is a familiar presence in the alley. If you’ve ever stopped to admire the murals, chances are you have Pierre to thank. His most recent project is of his dog Beetoe, a Chihuahua that is a big hit with the townspeople despite its microscopic size.

There is something rather comical about seeing a giant painting of a dog the size of a squirrel, but Nagley’s intentions are sincere. He decided to paint Beetoe – named because she is the size of a bee’s toe, according to Nagley – because everyone in town loves her. He wanted a symbol that would make as many people happy as possible.

Nagley plans to expand on the mural. Eventually he will add paintings of local children and other animals to create an atmosphere similar to Alice in Wonderland and films made by the Japanese animator/director Hayao Miyazaki. You can check up on Nagley’s progress behind the Emporium. While you’re there, take the time to appreciate the free show we get every single day in this town.

2 Responses to “The Kieth’s Alley gallery”