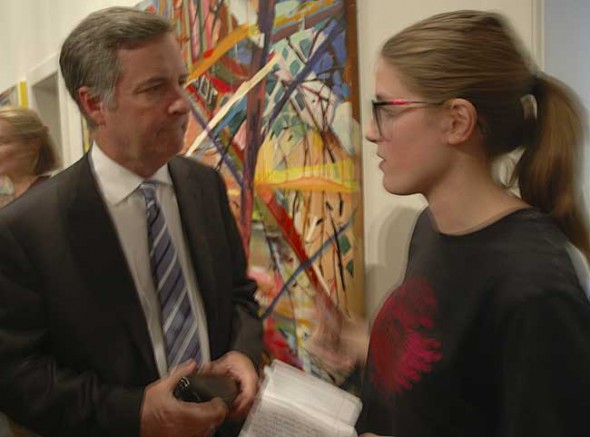 Mark Roosevelt, great-grandson of Teddy, former Massachusetts politician and current superintendent of the Pittsburgh schools, will be the new leader of the revived Antioch College.

“I am honored to become the next president of Antioch College and inspired by its history and the many people who made the college such a remarkable place to learn and work,” Roosevelt said in an Oct. 17 Antioch College press statement.

Roosevelt was chosen by the Antioch College pro tem board of trustees when the trustees met in Yellow Springs last weekend. After the college announced Roosevelt as the only finalist for the job on Oct. 6, Roosevelt visited campus last week to meet with the board and the public. After several days of hearing input from alumni, the board on Sunday morning was united in its choice of Roosevelt, according to Board President Lee Morgan.

“The board voted unanimously to appoint Mr. Roosevelt to the college presidency. He has spent his career as an advocate and an agent of institutional change,” Morgan said. “The Board is confident it has selected a strong leader who will guide the College on its road to revival.”

Antioch College gained its independence from Antioch University a year ago after a two-year alumni-led effort. The liberal arts college anticipates its first class of post-revival incoming students in the fall of 2011.

Roosevelt, who resigned his Pittsburgh job on Oct. 6, is expected to start his work at Antioch College the beginning of January, according to Morgan, who said the new president will begin by filling key positions, including the college’s academic dean, a development director and a leader of student life. The college plans to begin faculty searches soon, but will not complete them until Roosevelt has the opportunity to review the finalists, Morgan said in an interview Sunday.

Between the initial announcement of Roosevelt as the finalist and the board’s vote on Sunday, board members received feedback from about 100 alumni either online or via telephone, Morgan said, describing the responses as “overwhelmingly positive” regarding Roosevelt.

The board was also impressed with the number of Pittsburgh-based Antioch College alumni who highly praised Roosevelt and his school reform effort, Morgan said.

Roosevelt has led the Pittsburgh public schools through an intensive reform effort during the past five years. A Harvard-educated lawyer, he previously served as a Massachusetts state legislator who led an educational reform effort and also was the lead sponsor of that state’s successful gay rights bill. In 1984 Roosevelt ran unsuccessfully as the Democratic candidate for governor in Massachusetts. Since then, he has served as the CEO of Massachusetts Biomedical Initiatives and managing director of the Massachusetts Business Alliance for Education. He also teaches government classes at Carnegie Mellon University.

Roosevelt will come to the job without experience as an administrator in higher education. However, a transition team, composed of Morgan, Antioch Interim President Matthew Derr and as-yet-unidentified others, will offer Roosevelt support in areas new to him, such as the Antioch College system of community governance and recruitment of new students, Morgan said.

At their board meeting Sunday, the Antioch pro tem board also expressed its gratitude to Derr, an Antioch alumnus who co-led the successful effort to gain independence and then took on the presidency during the college’s first year of independence. Derr will continue as the college’s president until Roosevelt arrives on campus, according to Morgan. In January, Derr will move to Ann Arbor, where he will be a visiting fellow for the Great Lakes College Association, or GLCA.

In an earlier interview, Roosevelt stated that he and his wife, Dorothy, and their four-year-old daughter will be moving to Yellow Springs. In the Oct. 13 public forum, he said their attraction to Yellow Springs contributed to his decision to take the position.

“I feel I have one major gig left in me,” Roosevelt, 54, stated. “I want it to be in a place where we can sink down roots in the community.

In a report to the board on Friday, Oct. 15, board member Frances Degen Horowitz, who chaired the search committee, reported on the group’s six-month search.

With the assistance of search firm Isaacson, Miller, the group made about 600 contacts to potential candidates. The 15-member group was multi-generational, with members ranging from Horowitz from the Class of 1954 to a representative of the class of 2005. The group met 13 times, either in person or via conference calls, and reviewed the résumés of “a large number of potential candidates,” Horowitz said.

The committee chose 10 semi-finalists, a group which included two women and two minority members, according to -Horowitz, who said two of the 10 elected not to proceed. Four semi-finalists who were not familiar with the college were asked to visit Yellow Springs on their own.

In the end, two finalists were selected to meet with the board and the community in a public process. The second candidate dropped out before coming to Yellow Springs due to concern over the effects of the public process on the candidate’s current job, Horowitz said. The second candidate had been informed that Roosevelt was the board’s first choice, after the search firm suggested that alerting the candidates to their status was the ethical thing to do, Horowitz said.

“It was a risk we knew we were taking,” said board member Barbara Winslow, regarding the board’s commitment to holding an open process.

In response to a question, Horowitz said she could not think of anything that she would change about the search process, which she believes worked very well. The search firm was “top-notch,” she said, stating that the firm quickly seemed to understand the unique needs of the revived Antioch College.

The most difficult challenge the committee faced was helping the candidates understand the Antioch College tradition of community governance, Horowitz said, stating that, “The way it’s used here as an educational experience is unique.”

The word ‘Antioch’ has power

At the Oct. 13 public forum, Roosevelt described his surprise when he was initially contacted by the search firm, who asked if he’d be interested in being a candidate for the job of president of a closed college.

“I must admit it was an awkward call as they explained the college is closed. You kind of absorb the words,” he said. “And then they told me it was Antioch. Those words had power to me.”

However, while he said he’s inspired by Antioch traditions and history, Roosevelt declined, when asked, to identify his vision for the college.

“I’m not prepared to lay out a vision,” he said in response to a question from emeritus faculty Al Denman, who spoke of the visions of former presidents Horace Mann and Arthur Morgan. “It’s extremely important that others are involved in collaborative visioning.”

A vision has already been presented by Interim President Matthew Derr and the Morgan Fellows with the college’s new curriculum, Roosevelt said, stating that “the work of upcoming months is fleshing out the vision that’s already here.”

The first priority for everyone, Roosevelt said, is addressing the school’s “chronic poverty. Raising the necessary money to bring these dreams to life, fortunately or unfortunately, is the primary work of all of us.”

If he has a vision at this point, it’s for “excellence with diversity,” Roosevelt said, stating that, “The new Antioch must reassert its absolute dedication to excellence. I’m driven around excellence.”

He seeks faculty who not only have competence in their subject but who love teaching and push students to do their best, Roosevelt said.

“A classroom should be alive, vibrant and intellectually curious. It should be a place in which everyone, including the teacher, is being pushed,” he said. “A great class probably teaches kids something they didn’t know they needed to learn and didn’t want to learn, but something that made them better.”

The word “push” came up repeatedly in Roosevelt’s talk, and when he was asked to identify an area in which he, himself, needs pushing, said, “I need to be pushed away from pushing. I can push hard, maybe too hard.”

He described himself as an impatient person, although one who sees impatience as “a mixed thing. Sometimes there’s a good reason for it.”

The American Association of University Professors, or AAUP, has stated that it expects the revived college to reinstate former tenured faculty members to comply with AAUP guidelines, former faculty member Chris Hill said. Given that, and that the college will need faculty with experience with its unique educational program soon in order to engage prospective students, Roosevelt was asked, “How would you recommend that the resources of the former faculty be engaged in a way that’s both morally and financially sound?”

“It’s extremely important that the work of the former faculty be honored,” he said. However, “It is a serious issue that needs to be addressed and I’m not prepared to do so.”

While he does not bring to the job experience in higher education, he brings experience in several successful collaborative efforts, Roosevelt said in response to a question, including the leadership of an educational reform bill for Massachusetts and the Pittsburgh reform effort. In both situations, he said, he brought skills that allowed a diverse group of people to work together for a common goal.

“What I bring is the ability to help people arrive at a collaborative vision and mission and then find the resources to make it a reality,” he said. “The vision at the end was compelling enough to cause pretty extraordinary things to happen.”